These are just the highlights. For complete information, see:

Since its introduction, JavaScript has only had a single numeric type: Number. By definition, Numbers in JavaScript are floating point numbers, which means they can represent both integers (like 22 or 451) and decimal fractions (like 6.28 or 0.30000000000000004). However, this flexibility comes at a cost: 64-bit floats cannot reliably represent integers larger than 2 ** 53.

This limitation makes it difficult to work with very large numbers. For example, it’s why Twitter’s JSON API returns Tweet IDs as strings instead of literal numbers.

JavaScript does not automatically convert between BigInts and Numbers, so you can’t mix and match them in the same expression, nor can you serialize them to JSON.

You can, however, losslessly convert BigInt values to and from strings:

The same is not true for Numbers — they can lose precision when being parsed from a string:

MDN has much more information on BigInt.

Each release of Firefox brings improved DevTools, but Firefox 68 marks the debut of a brand new capability: checking for basic accessibility issues. 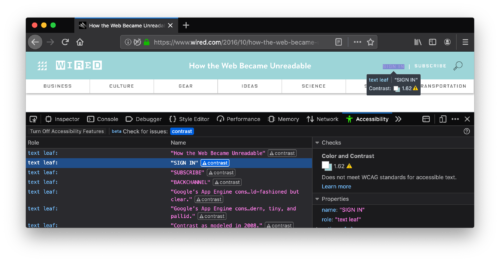 With Firefox 68, the Accessibility panel can now report any color contrast issues with text on a page. More checks are planned for the future.

Firefox 68 also includes refinements to the smarter debugging features we wrote about a few weeks ago.

Keeping the Web open is hard work. Sometimes browsers disagree on how to interpret web standards. Other times, browsers implement and ship their own ideas without going through the standards process. Even worse, some developers intentionally block certain browsers from their sites, regardless of whether or not those browsers would have worked. 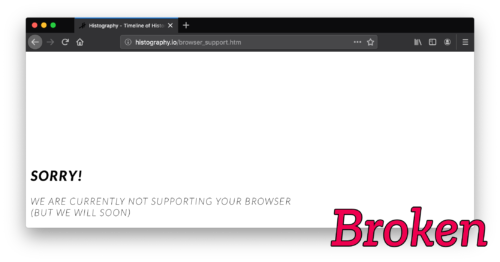 At Mozilla, we call these “Web Compatibility” problems, or “webcompat” for short.

Each release of Firefox contains fixes for webcompat issues. For example, Firefox 68 implements:

In the latter case, even with a standard line-clamp property in the works, we have to support the -webkit- version to ensure that existing sites work in Firefox.

Unfortunately, not all webcompat issues are as simple as implementing non-standard APIs from other browsers. Some problems can only be fixed by modifying how Firefox works on a specific site, or even telling Firefox to pretend to be something else in order to evade browser sniffing. 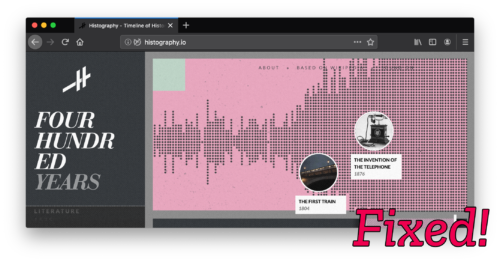 We deliver these targeted fixes as part of the webcompat system add-on that’s bundled with Firefox. This makes it easier to update our webcompat interventions as sites change, without needing to bake those fixes directly into Firefox itself. And as of Firefox 68, you can view (and disable) these interventions by visiting about:compat and toggling the relevant switches.

Our first preference is always to help developers ensure their sites work on all modern browsers, but we can only address the problems that we’re aware of. If you run into a web compatibility issue, please report it at webcompat.com.

Firefox 68 supports the latest syntax for CSS scroll snapping, which provides a standardized way to control the behavior of scrolling inside containers. You can find out more in Rachel Andrew’s article, CSS Scroll Snap Updated in Firefox 68.

As shown in the video above, scroll snapping allows you to start scrolling a container so that, when a certain threshold is reached, letting go will neatly finish scrolling to the next available snap point. It is easier to understand this if you try it yourself, so download Firefox 68 and try it out on some of the examples in the MDN Scroll Snapping docs.

And if you are wondering where this leaves the now old-and-deprecated Scroll Snap Points spec, read Browser compatibility and Scroll Snap.

Today’s release of Firefox also adds support for the ::marker pseudo-element. This makes it possible to style the bullets or counters that appear to the side of list items and summary elements.

Last but not least, CSS transforms now work on SVG elements like mark, marker, pattern and clipPath, which are indirectly rendered.

We have an entire article in the works diving into these and other CSS changes in Firefox 68; look for it later this month.

Two months ago, Firefox 67 became the first Firefox release with WebRender enabled by default, though limited to users with NVIDIA GPUs on Windows 10. Firefox 68 expands that audience to include people with AMD GPUs on Windows 10, with more platforms on the way.

We’ve also been hard at work in other areas of Firefox’s foundation. The URL bar (affectionately known as the “AwesomeBar”) has been completely reimplemented using web technologies: HTML, CSS, and JavaScript. This new ”QuantumBar” should be indistinguishable from the previous AwesomeBar, but its architecture makes it easier to maintain and extend in the future. We move one step closer to the eventual elimination of our legacy XUL/XBL toolkit with this overhaul.

We’ve also added a few new APIs, including support for the Visual Viewport API on Android, which returns the viewport taking into consideration things like on-screen keyboards or pinch-zooming. These may result in a smaller visible area than the overall layout viewport.

It is also now possible to use the .decode() method on HTMLImageElement to download and decode elements before adding them to the DOM. For example, this API simplifies replacing low-resolution placeholders with higher resolution images: it provides a way to know that a new image can be immediately displayed upon insertion into the page.

These highlights just scratch the surface. In addition to these changes in Firefox, the last month has seen us release Lockwise, a password manager that lets you take your saved credentials with you on mobile. We’ve also released a brand new Firefox Preview on Android, and more.

From all of us at your favorite nominee for Internet Villain of the Year, thank you for choosing Firefox.