By John Daggett
Posted on October 20, 2009 in @font-face, CSS, Featured Article, and Firefox

This article was written by John Daggett. John is a Mozilla contributor and has been working hard with font creators and web developers to improve the state of fonts on the web. This article is a high-level overview of whats different and shows some examples of WOFF in use. A full list of other supporting organizations can be found at the official Mozilla Blog.

The WOFF format originated from a collabaration between the font designers Erik van Blokland and Tal Leming with help from Mozilla’s Jonathan Kew. Each had proposed their own format and WOFF represents a melding of these different proposals. The format itself is intended to be a simple repackaging of OpenType or TrueType font data, it doesn’t introduce any new behavior, alter the @font-face linking mechanism or affect the way fonts are rendered. Many font vendors have expressed support for this new format so the hope is this will open up a wider range of font options for web designers.

Details on Differences between TrueType, OpenType and WOFF

Second, the format includes optional metadata so that a font vendor can tag their fonts with information related to font usage. This metadata doesn’t affect how fonts are loaded but tools can use this information to identify the source of a given font, so that those interested in the design of a given page can track down the fonts used on that page. Fonts in WOFF format are compressed but are not encrypted, the format should not be viewed as a “secure” format by those looking for a mechanism to strictly regulate and control font use.

Note: until Firefox 3.6 ships, users can test the use of WOFF fonts with Firefox nightly builds.

Below is a simple example that shows how to construct an @font-face rule that links to a WOFF font. To support browsers that only support direct linking to OpenType and TrueType fonts, the ‘src’ descriptor lists the WOFF font first along with a format hint (“woff”), followed by the TrueType version:

Other examples below demostrate the use of WOFF formatted fonts but each example has been constructed so that it will work in any browser that supports @font-face, including Internet Explorer.

A font family with multiple faces 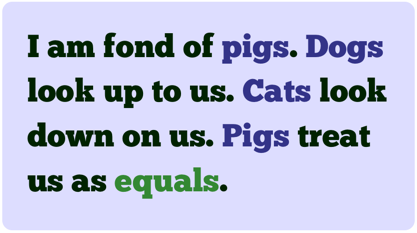 Below is an example of how downloadable fonts can be used to render languages for which font support is usually lacking. The example shows the UN Declaration of Human Rights, translated into two African languages, and how these render with default browser fonts vs. with a downloadable font suited for rendering these languages.

Note that in one of these examples that the font size goes from a 3.1MB TTF to a 1MB WOFF font and in the other from a 172KB TTF to an 80KB WOFF file. 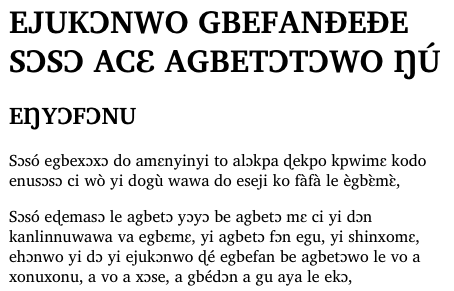 An example in Japanese

Working With Other Browsers

Firefox 3.6 will be the first shipping browser to support the WOFF format so it’s important to construct @font-face rules that work with browsers lacking WOFF support. One thing that helps greatly with this is the use of format hints to indicate the format of font data before it’s downloaded; browsers that don’t recognize a given format simply skip data in a format they don’t support.

Internet Explorer, including IE8, only supports the EOT font format and only implements a subset of the @font-face rule descriptors. This makes creating cross-platform @font-face rules that work with IE especially tricky. One solution is to make different rules for IE:

One minor downside of this is that IE doesn’t understand format hints and doesn’t parse @font-face URL’s correctly, it treats format hints as part of the URL, so web authors using the @font-face rules above will see the following in their access logs:

IE successfully pulls down and uses the EOT version of the font but also tries to pull down the WOFF font with the format hint included in the URL. This fails and doesn’t affecting page rendering but it wastes valuable server resources. For more discussion, see Paul Irish’s blog post for one interesting workaround.