Getting lively with Firefox 90

Getting lively with Firefox 90

As the summer rolls around for those of us in the northern hemisphere, temperatures are high and unwinding with a cool ice tea is high on the agenda. Isn’t it lucky then that Background Update is here for Windows, which means Firefox can update even if it’s not running. We can just sit back and relax!

Also this release we see a few nice JavaScript additions, including private fields and methods for classes, and the at() method for Array, String and TypedArray global objects.

This blog post just provides a set of highlights; for all the details, check out the following:

A feature JavaScript has lacked since its inception, private fields and methods are now enabled by default In Firefox 90. This allows you to declare private properties within a class. You can not reference these private properties from outside of the class; they can only be read or written within the class body.

Private names must be prefixed with a ‘hash mark’ (#) to distinguish them from any public properties a class might hold.

This shows how to declare private fields as opposed to public ones within a class:

Static fields and methods can also be private. For a more detailed overview and explanation, check out the great guide: Working with private class features. You can also read what it takes to implement such a feature in our previous blog post Implementing Private Fields for JavaScript.

The relative indexing method at() has been added to the Array, String and TypedArray global objects.

This example declares an array of values and uses the at() method to select an item in that array from the end.

It’s worth mentioning there are other common ways of doing this, however this one looks quite neat.

The 2D Canvas API has a new createConicGradient() method, which creates a gradient around a point (rather than from it, like createRadialGradient() ). This feature allows you to specify where you want the center to be and in which direction the gradient should start. You then add the colours you want and where they should begin (and end).

This example creates a conic gradient with 5 colour stops, which we use to fill a rectangle. 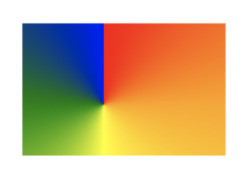 Fetch metadata request headers provide information about the context from which a request originated. This allows the server to make decisions about whether a request should be allowed based on where the request came from and how the resource will be used. Firefox 90 enables the following by default:

Ruth John works as a Technical Writer at Mozilla. A recent addition to the MDN team, she's a big fan of web technologies, and not only enjoys writing about them, but building demos with them as well.