Implications of Rewriting a Browser Component in Rust

The previous posts in this Fearless Security series examine memory safety and thread safety in Rust. This closing post uses the Quantum CSS project as a case study to explore the real world impact of rewriting code in Rust.

The style component is the part of a browser that applies CSS rules to a page. This is a top-down process on the DOM tree: given the parent style, the styles of children can be calculated independently—a perfect use-case for parallel computation. By 2017, Mozilla had made two previous attempts to parallelize the style system using C++. Both had failed.

Quantum CSS resulted from a need to improve page performance. Improving security is a happy byproduct. 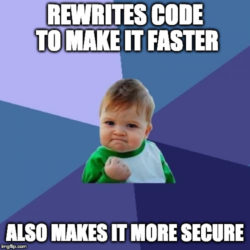 There’s a large overlap between memory safety violations and security-related bugs, so we expected this rewrite to reduce the attack surface in Firefox. In this post, I will summarize the potential security vulnerabilities that have appeared in the styling code since Firefox’s initial release in 2002. Then I’ll look at what could and could not have been prevented by using Rust.

Over the course of its lifetime, there have been 69 security bugs in Firefox’s style component. If we’d had a time machine and could have written this component in Rust from the start, 51 (73.9%) of these bugs would not have been possible. While Rust makes it easier to write better code, it’s not foolproof.

Rust is a modern systems programming language that is type- and memory-safe. As a side effect of these safety guarantees, Rust programs are also known to be thread-safe at compile time. Thus, Rust can be a particularly good choice when:

However, there are classes of bugs that Rust explicitly does not address—particularly correctness bugs. In fact, during the Quantum CSS rewrite, engineers accidentally reintroduced a critical security bug that had previously been patched in the C++ code, regressing the fix for bug 641731. This allowed global history leakage via SVG image documents, resulting in bug 1420001. As a trivial history-stealing bug, this is rated security-high. The original fix was an additional check to see if the SVG document was being used as an image. Unfortunately, this check was overlooked during the rewrite.

While there were automated tests intended to catch :visited rule violations like this, in practice, they didn’t detect this bug. To speed up our automated tests, we temporarily turned off the mechanism that tested this feature—tests aren’t particularly useful if they aren’t run. The risk of re-implementing logic errors can be mitigated by good test coverage (and actually running the tests). There’s still a danger of introducing new logic errors.

As developer familiarity with the Rust language increases, best practices will improve. Code written in Rust will become even more secure. While it may not prevent all possible vulnerabilities, Rust eliminates an entire class of the most severe bugs.

Overall, bugs related to memory, bounds, null/uninitialized variables, or integer overflow would be prevented by default in Rust. The miscellaneous bug I referenced above would not have been prevented—it was a crash due to a failed allocation.

All of the bugs in this analysis are related to security, but only 43 received official security classifications. (These are assigned by Mozilla’s security engineers based on educated “exploitability” guesses.) Normal bugs might indicate missing features or problems like crashes. While undesirable, crashes don’t result in data leakage or behavior modification. Official security bugs can range from low severity (highly limited in scope) to critical vulnerability (might allow an attacker to run arbitrary code on the user’s platform).

There’s a significant overlap between memory vulnerabilities and severe security problems. Of the 34 critical/high bugs, 32 were memory-related.

Bug 955914 is a heap buffer overflow in the GetCustomPropertyNameAt function. The code used the wrong variable for indexing, which resulted in interpreting memory past the end of the array. This could either crash while accessing a bad pointer or copy memory to a string that is passed to another component.

While Rust is similar to C++ in some ways, idiomatic Rust uses different abstractions and data structures. Rust code will look very different from C++ (see below for details). First, let’s consider what would happen if we translated the vulnerable code as literally as possible:

The Rust compiler would accept the code, since there is no way to determine the length of vectors before runtime. Unlike arrays, whose length must be known, the Vec type in Rust is dynamically sized. However, the standard library vector implementation has built-in bounds checking. When an invalid index is used, the program immediately terminates in a controlled fashion, preventing any illegal access.

The actual code in Quantum CSS uses very different data structures, so there’s no exact equivalent. For example, we use Rust’s powerful built-in data structures to unify the ordering and property name data. This allows us to avoid having to maintain two independent arrays. Rust data structures also improve data encapsulation and reduce the likelihood of these kinds of logic errors. Because the code needs to interact with C++ code in other parts of the browser engine, the new GetCustomPropertyNameAt function doesn’t look like idiomatic Rust code. It still offers all of the safety guarantees while providing a more understandable abstraction of the underlying data.

Due to the overlap between memory safety violations and security-related bugs, we can say that Rust code should result in fewer critical CVEs (Common Vulnerabilities and Exposures). However, even Rust is not foolproof. Developers still need to be aware of correctness bugs and data leakage attacks. Code review, testing, and fuzzing still remain essential for maintaining secure libraries.

Compilers can’t catch every mistake that programmers can make. However, Rust has been designed to remove the burden of memory safety from our shoulders, allowing us to focus on logical correctness and soundness instead.