Today’s applications are multi-threaded—instead of sequentially completing tasks, a program uses threads to perform multiple tasks simultaneously. We all use concurrency and parallelism every day:

While this allows programs to do more faster, it comes with a set of synchronization problems, namely deadlocks and data races. From a security standpoint, why do we care about thread safety? Memory safety bugs and thread safety bugs have the same core problem: invalid resource use. Concurrency attacks can lead to similar consequences as memory attacks, including privilege escalation, arbitrary code execution (ACE), and bypassing security checks.

Concurrency bugs, like implementation bugs, are closely related to program correctness. While memory vulnerabilities are nearly always dangerous, implementation/logic bugs don’t always indicate a security concern, unless they occur in the part of the code that deals with ensuring security contracts are upheld (e.g. allowing a security check bypass). However, while security problems stemming from logic errors often occur near the error in sequential code, concurrency bugs often happen in different functions from their corresponding vulnerability, making them difficult to trace and resolve. Another complication is the overlap between mishandling memory and concurrency flaws, which we see in data races.

Programming languages have evolved different concurrency strategies to help developers manage both the performance and security challenges of multi-threaded applications.

It’s a common axiom that parallel programming is hard—our brains are better at sequential reasoning. Concurrent code can have unexpected and unwanted interactions between threads, including deadlocks, race conditions, and data races.

A deadlock occurs when multiple threads are each waiting on the other to take some action in order to proceed, leading to the threads becoming permanently blocked. While this is undesirable behavior and could cause a denial of service attack, it wouldn’t cause vulnerabilities like ACE.

A race condition is a situation in which the timing or ordering of tasks can affect the correctness of a program, while a data race happens when multiple threads attempt to concurrently access the same location in memory and at least one of those accesses is a write. There’s a lot of overlap between data races and race conditions, but they can also occur independently. There are no benign data races.

The best-known type of concurrency attack is called a TOCTOU (time of check to time of use) attack, which is a race condition between checking a condition (like a security credential) and using the results. TOCTOU attacks are examples of integrity loss.

Deadlocks and loss of liveness are considered performance problems, not security issues, while information and integrity loss are both more likely to be security-related. This paper from Red Balloon Security examines some exploitable concurrency errors. One example is a pointer corruption that allows privilege escalation or remote execution—a function that loads a shared ELF (Executable and Linkable Format) library holds a semaphore correctly the first time it’s called, but the second time it doesn’t, enabling kernel memory corruption. This attack is an example of information loss.

The trickiest part of concurrent programming is testing and debugging—concurrency bugs have poor reproducibility. Event timings, operating system decisions, network traffic, etc. can all cause different behavior each time you run a program that has a concurrency bug. 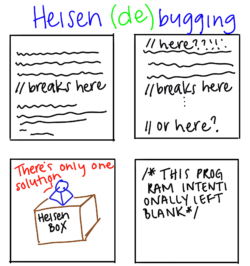 Not only can behavior change each time we run a concurrent program, but inserting print or debugging statements can also modify the behavior, causing heisenbugs (nondeterministic, hard to reproduce bugs that are common in concurrent programming) to mysteriously disappear. These operations are slow compared to others and change message interleaving and event timing accordingly.

First, we need to define what “threadsafe” means:

“A data type or static method is threadsafe if it behaves correctly when used from multiple threads, regardless of how those threads are executed, and without demanding additional coordination from the calling code.” MIT

In languages that don’t statically enforce thread safety, programmers must remain constantly vigilant when interacting with memory that can be shared with another thread and could change at any time. In sequential programming, we’re taught to avoid global variables in case another part of code has silently modified them. Like manual memory management, requiring programmers to safely mutate shared data is problematic.

Languages that limit threading either confine mutable variables to a single thread or require that all shared variables be immutable. Both approaches eliminate the core problem of data races—improperly mutating shared data—but this can be too limiting. To solve this, languages have introduced low-level synchronization primitives like mutexes. These can be used to build threadsafe data structures.

Python and the global interpreter lock

The reference implementation of Python, CPython, has a mutex called the Global Interpreter Lock (GIL), which only allows a single thread to access a Python object. Multi-threaded Python is notorious for being inefficient because of the time spent waiting to acquire the GIL. Instead, most parallel Python programs use multiprocessing, meaning each process has its own GIL.

Java is designed to support concurrent programming via a shared-memory model. Each thread has its own execution path, but is able to access any object in the program—it’s up to the programmer to synchronize accesses between threads using Java built-in primitives.

While Java has the building blocks for creating thread-safe programs, thread safety is not guaranteed by the compiler (unlike memory safety). If an unsynchronized memory access occurs (aka a data race), then Java will raise a runtime exception—however, this still relies on programmers appropriately using concurrency primitives.

C++ and the programmer’s brain

While Python avoids data races by synchronizing everything with the GIL, and Java raises runtime exceptions if it detects a data race, C++ relies on programmers to manually synchronize memory accesses. Prior to C++11, the standard library did not include concurrency primitives.

Most programming languages provide programmers with the tools to write thread-safe code, and post hoc methods exist for detecting data races and race conditions; however, this does not result in any guarantees of thread safety or data race freedom.

How does Rust manage concurrency?

The first post of this series introduced ownership—one of the core concepts of Rust. Each variable has a unique owner and can either be moved or borrowed. If a different thread needs to modify a resource, then we can transfer ownership by moving the variable to the new thread.

Moving enforces exclusion, allowing multiple threads to write to the same memory, but never at the same time. Since an owner is confined to a single thread, what happens if another thread borrows a variable?

Ownership was designed to mitigate memory vulnerabilities. It turns out that it also prevents data races.

While many programming languages have methods to enforce memory safety (like reference counting and garbage collection), they usually rely on manual synchronization or prohibitions on concurrent sharing to prevent data races. Rust’s approach addresses both kinds of safety by attempting to solve the core problem of identifying valid resource use and enforcing that validity during compilation. 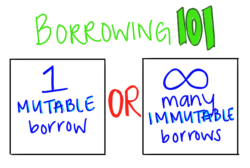 The ownership rules prevent multiple threads from writing to the same memory and disallow simultaneous sharing between threads and mutability, but this doesn’t necessarily provide thread-safe data structures. Every data structure in Rust is either thread-safe or it’s not. This is communicated to the compiler using the type system.

Rust is a type safe language—the compiler verifies that all types are consistent. For example, the following code would not compile:

All variables in Rust have a type—often, they’re implicit. We can also define new types and describe what capabilities a type has using the trait system. Traits provide an interface abstraction in Rust. Two important built-in traits are Send and Sync, which are exposed by default by the Rust compiler for every type in a Rust program:

This example is a simplified version of the standard library code that spawns threads:

The spawn function takes a single argument, closure, and requires that closure has a type that implements the Send and Fn traits. When we try to spawn a thread and pass a closure value that makes use of the variable x, the compiler rejects the program for not fulfilling these requirements with the following error:

The Send and Sync traits allow the Rust type system to reason about what data may be shared. By including this information in the type system, thread safety becomes type safety. Instead of relying on documentation, thread safety is part of the compiler’s law.

This allows programmers to be opinionated about what can be shared between threads, and the compiler will enforce those opinions. 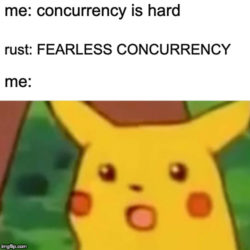