The Canvas Debugger is a new tool we’ll be demoing at the Game Developers Conference in San Francisco. It’s a tool for debugging animation frames rendered on a Canvas element. Whether you’re creating a visualization, animation or debugging a game, this tool will help you understand and optimize your animation loop. It will let you debug either a WebGL or 2D Canvas context. 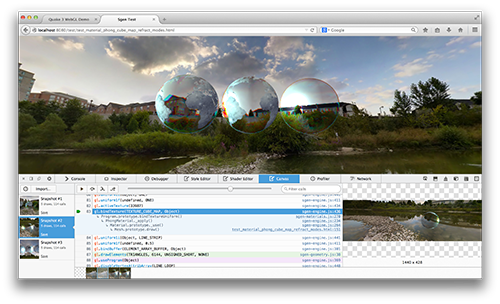 You can debug an animation using a traditional debugger, like our own JavaScript Debugger in Firefox’ Developer Tools. However, this can be difficult as it becomes a manual search for all of the various canvas methods you may wish to step through. The Canvas Debugger is designed to let you view the rendering calls from the perspective of the animation loop itself, giving you a much better overview of what’s happening.

The Canvas Debugger works by creating a snapshot of everything that happens while rendering a frame. It records all canvas context method calls. Each frame snapshot contains a list of context method calls and the associated JavaScript stack. By inspecting this stack, a developer can trace the call back to the higher level function invoked by the app or engine that caused something to be drawn.

Certain types of Canvas context functions are highlighted to make them easier to spot in the snapshot. Quickly scrolling through the list, a developer can easily spot draw calls or redundant operations.

Each draw call has an associated screenshot arranged in a timeline at the bottom of the screen as a “film-strip” view. You can “scrub” through this film-strip using a slider to quickly locate a draw call associated with a particular bit of rendering. You can also click a thumbnail to be taken directly to the associated draw call in the animation frame snapshot.

The thumbnail film-strip gives you get a quick overview of the drawing process. You can easily see how the scene is composed to get the final rendering.

You might notice a familiar row of buttons in the attached screenshot. They’ve been borrowed from the JavaScript Debugger and provide the developer a means to navigate through the animation snapshot. These buttons may change their icons at final release, but for now, we’ll describe them as they currently look.

Jumping to the JavaScript debugger by “stepping in” on a snapshot function call, or via a function’s stack, allows you to add a breakpoint and instantly pause if the animation is still running. Much convenience!

We’re not done. We have some enhancements to make this tool even better.

And we’re just getting started. The Canvas Debugger should be landing in Firefox Nightly any day now. Watch this space for news of its landing and more updates.