The Firefox Developer Tools team is particularly proud announce that Firefox 23 (in Firefox Beta, to be released today) ships with an initial but very functional Network Monitor tool that not only provides similar functionality to other tool sets, but in many improves on them. This important step is the result of lots of hard work from the entire team, but in particular Victor Porof and Mihai Sucan.

To give you the best idea of how the network monitor works, here’s a series of steps to follow:

As Firefox loads the page you’ll see each individual request get added as a row, much as you would expect from other tools. In particular it is now very easy to visualize not just how quickly parts of the page load and in what order, but also where problems are: missing assets, slow web servers, buggy apis.

As you get used to using the Network Monitor, you’ll also notice that you don’t need to necessarily hit refresh on a page that is already loaded, once you open the network tool any subsequent requests that happen will be logged. For example, if you’re interested in xhr requests made by an app, just open the monitor and start clicking buttons – you should see any api calls logged as normal without needing to reload.

Status at a glance

One thing you should notice right away about the way the Network tool displays a page load is that we’ve taken care to provide both information and design cues to show you what is happening at a glance as the page loads:

We’ve tried to create a clean UI that delivers key aspects of how an entire page loads without creating too much visual clutter:

It’s all in the details

Once all the page’s assets have been loaded, clicking on a single request opens up the sidebar view which provides detailed information about that request, broken down into panels that display different aspects of a given request: Headers, Cookies, Parameters, Response and Timings. Similar to how the Inspector tool works, this panel is responsive and will neatly pop down below the request list if you’ve docked the tools to the right side: 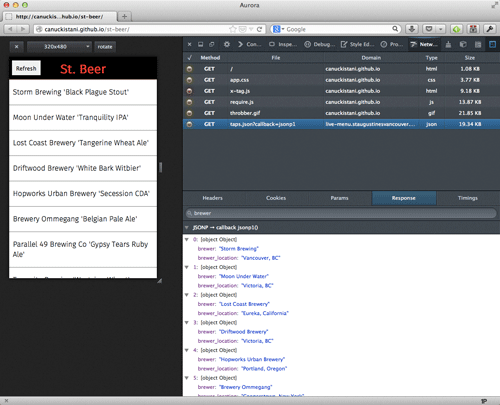 The Headers panel is particularly useful for debugging asset caching problems, and this panel provides parsed lists for both the request and response headers that also supports filtering based on either name or value: 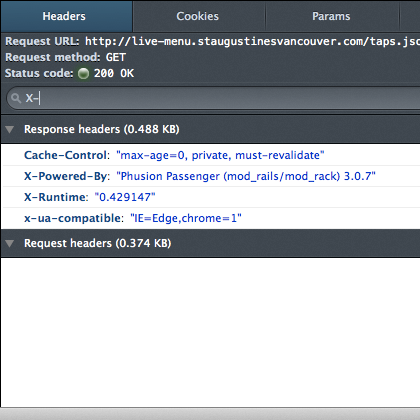 The Timings panel gives you a detailed, visual breakdown of where time was spent for the selected request. Is it DNS? Is it the server itself?

If you’re debugging API requests or form posts, you’ll really like how we’ve parsed out the url parameters in the Params panel: 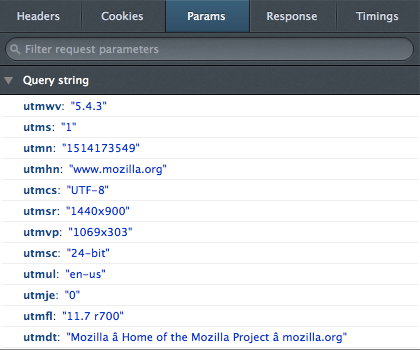 Are you using a lot of API calls to improve the responsiveness of your app? JSON responses are parsed and displayed as a navigable object in the Response panel to make it easy to check on the data coming back from the server. You can filter the data based on JSON values as well. 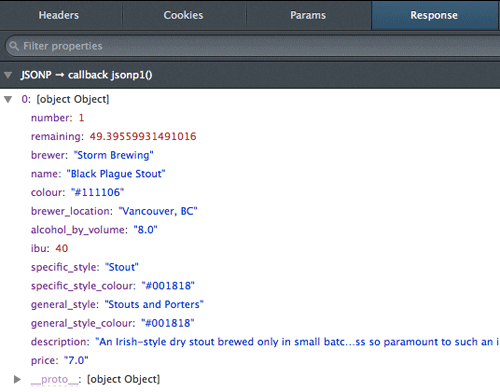 It’s great to deliver the Network Monitor to a much wider set of developers in Firefox 23 Beta but we haven’t stopped adding new features in the meantime. Firefox 24 ( now in the Aurora channel ) features several notable improvements that have landed in the last 6 weeks or so: