Firefox and the release channels

By Robert Nyman [Editor emeritus]
Posted on May 8, 2012 in Firefox and Firefox Aurora

When we meet and talk to people, there are often questions about Firefox, how the release shedule works and what different channels we have for testing. Therefore, I’d like to introduce you to/remind you about them and also let you know where the most important testing is, both for you and for us. 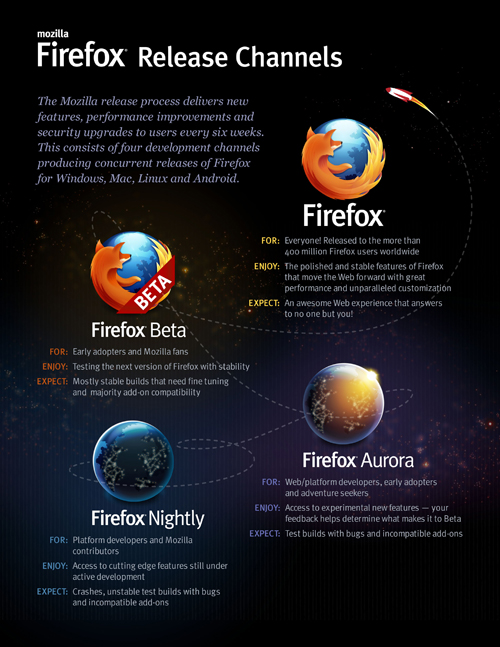 Firefox is released on a six week schedule, meaning that every sixth week there will be new versions of Firefox Release, Firefox Beta and Firefox Aurora. Nightly is, naturally, released every night. 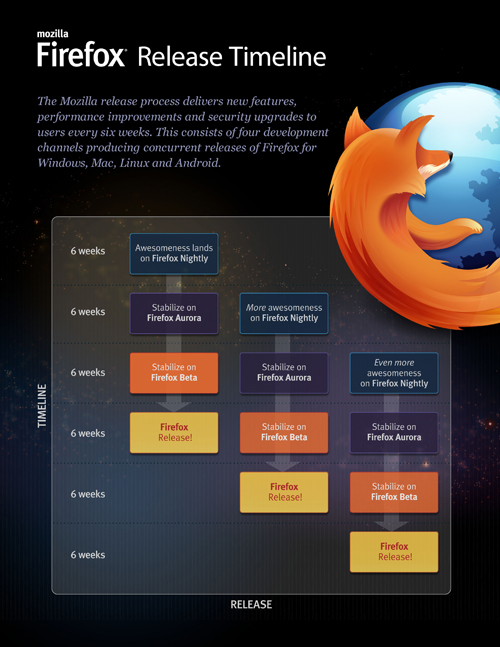 Running multiple versions of Firefox at the same time

There are many different ways of running multiple versions of Firefox at the same time. What it all comes down to is setting up different profiles that you have per each web browser instance. The easiest way is most likely to use the Profile Manager, as described on MDN.

If you are on Mac OS X, it’s easy to use the automated version of setting up multiple profiles of Firefox.

Another option, in plain code and as outlined in Multiple Firefox Instances, is to just launch the Profile manager directly:

The version of Firefox that is the best version to test for web developers is Firefox Aurora. It is in a stable enough condition to use, but also has features at their latest stage before they become approved. Therefore, your chance to affect implementations, find bugs, improve features is when it has become Firefox Aurora – likewise, it gives us a better chance to ensure that when Firefox is officially released, all the things are in place in the best possible manner.

Therefore, please take the time to test out Firefox Aurora and new features, so we can together help Firefox and the web better!