This is episode 9, out of a total 12, in the A Node.JS Holiday Season series from Mozilla’s Identity team. Now it’s time to delve into localization! 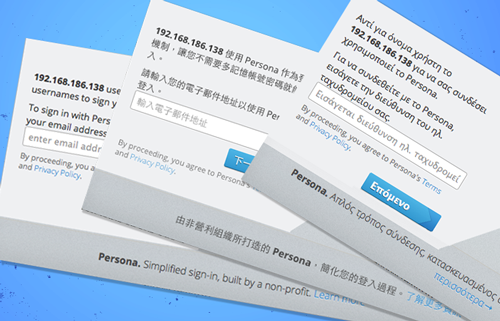 Did you know that Mozilla’s products and services are localized into into as many as 90 languages?

The following are just a few examples of localization:

In this series of posts, I’m going to cover some technical aspects of how to localize a Node.js service.

Before we start, I’ll be using the acronyms L10n (Localization) and I18n Internationalization. I18n is the technical plumbing needed to make L10n possible.

Mozilla Persona is a Node.js based service localized into X locales. Our team has very specific goals that inhibit us from using existing Node L10n libraries.

We created these modules, to meet the following goals

i18n-abide is the main module you’ll use to integrate translations into your own service. Let’s walk through how to add it.

In these examples, we’ll assume your code uses Express and EJS templates.

We will look at the configuration values in detail during the third installment of this L10n series.

The i18n abide middleware sets up request processing and injects various functions which We’ll use for translation. Below, we will see these are available in the request object and in the templating context.

Okay, you next step is to work through all of your code where you have user visible prose.

Here is an example template file:

The key thing abide does, is it injects into the Node and express framework references to the gettext function.

Abide also provides other variables and functions, such as lang, lang_dir.

When doing localization, we refer to strings or Gettext strings: these are pieces of prose, labels, button, etc. Any prose that is visible to the end user is a string.

Technically, we don’t mean JavaScript String, as you can have strings which are part of your program, but never shown to the user. String is overloaded to mean, stuff that must get translated.

Here is an example JavaScript file:

We can see that these variables and functions (like gettext) are placed in the req object.

So to setup our site for localization, we must look through all of our code and templates and wrap strings in calls to gettext.

How do we know what the user’s preferred language is?

At runtime, the middleware will detect the user’s preferred language.

The i18n-abide module looks at the Accept-Language HTTP header. This is sent by the browser and includes all of the user’s preferred languages with a preference order.

i18n-abide processes this value and compares it with your app’s supported_languages configuration. It will make the best match possible and serve up that language.

If a good match cannot be found, it will use the strings you’ve put into your code and templates, which are typically English strings.

In our next post, we’ll look at how strings like “Hello, World!” are extracted, translated, and prepared for use.

In the third post, we’ll look more deeply at the middleware and configuration options. We’ll also test out our localization work.

This was part nine in a series with a total of 12 posts about Node.js. The previous ones are: