Tracking Down Memory Leaks in Node.js – A Node.JS Holiday Season

By
Posted on November 6, 2012 in A Node.JS Holiday Season, Featured Article, and Node.js

This post is the first in the A Node.JS Holiday Season series from the
Identity team at Mozilla, who last month delivered the first beta
release of Persona. To make Persona, we built a collection tools addressing areas ranging from debugging, to localization, to dependency management, and more. This series of posts will share our learnings and tools with the community, tools which are relevant to anyone building a high availability service with Node.JS. We hope you enjoy the series, and look forward to your thoughts and contributions.

We’ll start off with a topic about a nitty-gritty Node.js problem: memory leaks. We present node-memwatch – a library to help discover and isolate memory leaks in Node.

A fair question to ask about tracking down memory leaks is “Why bother?”. Aren’t there always more pressing problems that need to be tackled first? Why not just restart your service from time to time, or throw more RAM at it? In answer to these questions, we would suggest three things:

Where’s That Dripping Sound Coming From?

In the plumbing of a complex app, there are various places where leaks can occur. Closures are probably the most well-known and notorious. Because closures maintain references to things in their scope, they are common sources for leaks.

Closure leaks will probably be spotted eventually if somebody’s looking for them, but in Node’s asynchronous world we generate closures all the time in the form of callbacks. If these callbacks are not handled as fast as they are created, memory allocations will build up and code that doesn’t look leaky will act leaky. That’s harder to spot.

Your application could also leak due to a bug in upstream code. You may be able to track down the location in your code from where the leak is emanating, but you might just stare in bewilderment at your perfectly-written code wondering how in the world it can be leaking!

It’s these hard-to-spot leaks that make us want a tool like node-memwatch. Legend has it that months ago, our Lloyd Hilaiel locked himself in a closet for two days, trying to track down a memory leak that became noticeable under heavy load testing. (BTW, look forward to Lloyd’s forthcoming post on load testing.)

After two days of bisecting, he discovered that the culprit was in the Node core: Event listeners in http.ClientRequest were not getting cleaned up. (When this was eventually fixed in Node, the patch consisted of a subtle but crucial two characters.) It was this miserable experience that made Lloyd want to write a tool to help find leaks.

There is already a good and continually growing collection of good tools for finding leaks in Node.js applications. Here are some of them:

We like all of these tools, but none was a perfect fit for our environment. The Web Inspector approach is fantastic for applications in development, but is difficult to use on a live deployment, especially when multiple servers and subprocess are involved in the mix. As such, it may be difficult to reproduce memory leaks that bite in long-running and heavily-loaded production environments. Tools like dtrace and libumem are truly awe-inspiring, but don’t work on all operating systems.

We wanted a platform-independent debugging library requiring no instrumentation to tell us when our programs might be leaking memory, and help us find where they are leaking. So we wrote node-memwatch.

It gives you three things:

node-memwatch can emit a sample of memory usage directly after a full garbage collection and memory compaction, before any new JS objects have been allocated. (It uses V8’s post-gc hook, V8::AddGCEpilogueCallback, to gather heap usage statistics every time GC occurs.)

Here’s an example that shows how this data looks over time with a leaky application. The graph below is tracking memory usage over time. The green crazy line shows what process.memoryUsage() reports, and the red line shows the current_base reported by node_memwatch. The box on the lower-left shows additional statistics. 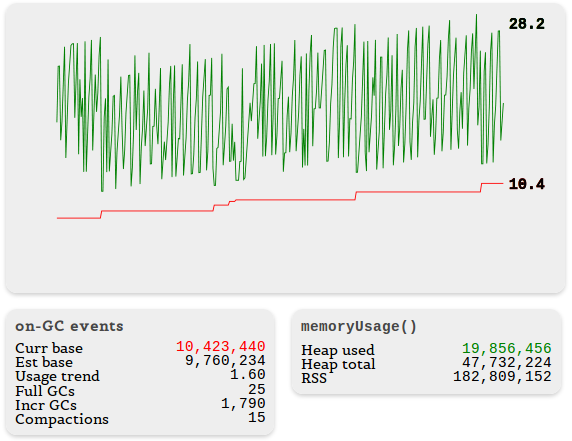 Note that the number of incremental GCs is very high. This is a warning sign that V8 is working overtime to try to clean up allocations.

We have a simple heuristic to warn you that your app may be leaky. If, over five consecutive GCs, you continue to allocate memory without releasing it, node-memwatch will emit a leak event. The message tells you in nice, human-readable form what’s going on:

Finally, node-memwatch can compare snapshots of object names and allocation counts on the heap. The resulting diff can help isolate offenders.

The contents of diff will look something like this:

HeapDiff triggers a full GC before taking its samples, so the data won’t be full of a lot of junk. memwatch‘s event emitters will not notify of HeapDiff GC events, so you can safely put HeapDiff calls in your 'stats' handler.

In the graph below, we’ve added the objects with the most heap allocations: 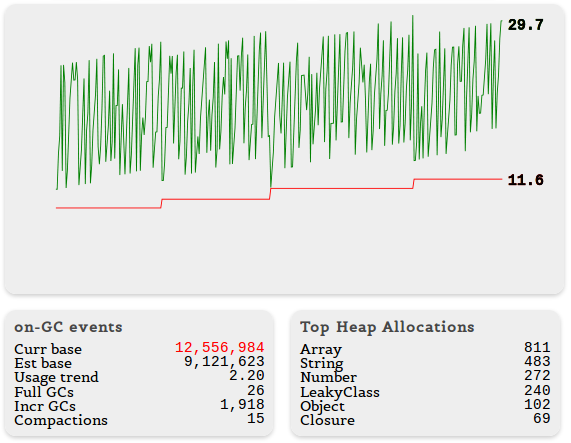 Where to Go From Here

We want it to do more. In particular, we want node-memwatch to be able to provide some examples of a leaked object (e.g., names of variables, array indices, or closure code).

We hope you’ll find node-memwatch useful in debugging leaks in your Node app, and that you’ll fork the code and help us make it better.