This is episode 6, out of a total 12, in the A Node.JS Holiday Season series from Mozilla’s Identity team. Today it’s time for the second part about front end performance.

You might know that Connect puts ETags on static content, but not dynamic content. Unfortunately, if you dynamically generate i18n versions of static pages, those pages don’t get caching headers at all–unless you add a build step to pregenerate all pages in all languages. What a lame chore.

This article introduces etagify, a Connect middleware that generates ETags on the fly by md5-ing outgoing response bodies, storing the hashes in memory. Etagify lets you skip the build step, improves performance more than you might think (we measured a 9% load time improvement in our tests), and it’s super easy to use:

2. call etagify on routes you want to cache

Read on to learn more about etagify: how it works, when to use it, when not to use it, and how to measure your results.

(Need a refresher on ETags and HTTP caching? We've put together a cheat sheet to get you back up to speed.)

By focusing on a single, concrete use case, etagify gets the job done in just a hundred lines of code (including documentation). Let's take a look at the fifteen lines that cover the basics, leaving out Vary header handling edge cases.

There are two parts to consider: hashing outgoing responses & caching the hashes; checking the cache against incoming conditional GETs.

First, here's where we add to the cache. Comments inline.

Next, here's how we check against the cache. Again, comments inline.

When (and when not) to use etagify

Etagify's approach is super simple, and it's a great solution for dynamically-generated pages that don't change while the server is running, like i18n static pages. However, etagify has some gotchas when dealing with other common use cases:

We didn't foresee huge performance wins with etagify, because conditional GETs still require an HTTP roundtrip, and avoiding page redownloading only saves the user a few KB (see screenshot). However, etagify is a really simple optimization, so even a small gain would justify including it in our stack. 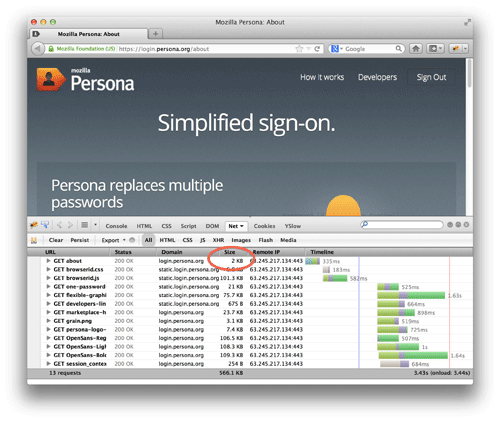 We tested etagify's effects on performance by spinning up a dev instance of Persona on an awsbox, opening up firebug, and taking 50 load time measurements of our 'about' page--with and without etagify enabled. (Page load times are a good-enough metric for our use case; you might care more about time till above-the-fold content renders, or the first content hits the page, or the first ad is displayed.)

After gathering raw data, we did some quick statistics to see how much etagify improved performance. We found the mean and standard deviation for both data sets, assuming the measured values were spread out like a bell curve around the averages.

Next, we used the t-test to check the odds that the improvement could be observed without adding etagify at all. Our p-value was less than 0.01, meaning less than 1% chance that randomness could have caused the apparent improvement. We can conclude that the measured improvement is statistically significant.

Here's a chart of the averaged before and after data: 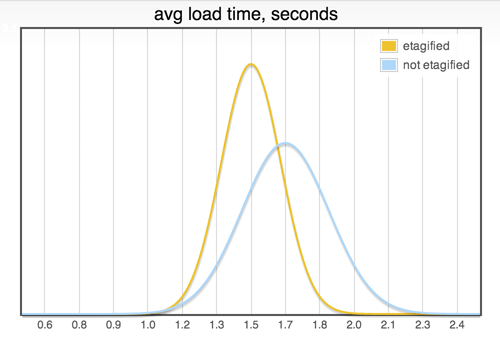 Bringing it all back home

We think etagify is a tiny bundle of win. Even if it's not the right tool for your current project, hopefully our approach of (1) writing focused tools to solve just the problem at hand, and (2) measuring just rigorously enough to be sure you're getting somewhere, gives you inspiration or food for thought.

This was part six in a series with a total of 12 posts about Node.js. The previous ones are:

@6a68 hacks on Persona, tickles ivories, has sand in all his shoes.