Note: the discussion below applies to work in progress that might show up in Firefox 3.7. It does not describe features in Firefox 3.6.

This post is from Jonathan Kew and John Daggett. He’s supplied a 5 minute video that shows some of the features on the fly. If you’re a total font nerd and you enjoy a soothing British accent, you might want to watch it.

Using @font-face allows web designers a wide palette of font choices and with commercial font vendors supporting the WOFF font format, the set of font choices should improve even more. So the next step is clearly to try and make better use of features available in these fonts.

For many years, “smart” font formats such as OpenType and AAT have provided font designers ways of including a rich set of variations in their fonts, from ligatures and swashes to small caps and tabular figures. The OpenType specification describes these features, identifying each with a unique feature tag. But these have typically only been available to those using professional publishing applications such as Adobe InDesign. Firefox currently renders using font defaults; it would be much more interesting to provide web authors with a way of controlling these font features via CSS.

Håkon Wium Lie of Opera, based on discussions with Tal Leming and Adam Twardoch, proposed extending the CSS ‘font-variant’ property to include values for font features. Mozilla is actively working on a new proposal along these lines. This is a fairly big addition to CSS, so it will most likely involve some complex discussions about how best to support these features.

As part of this effort, Jonathan Kew has been working on porting a portion of the Pango library for use with handling complex scripts and to enable the use of font features on all supported platforms. He currently has an experimental build that uses a special CSS property to associate a list of OpenType features with specific elements in a page. This is not the proposed format, it simply provides a better way of discussing possible sets of font-variant properties and the OpenType feature settings to which they should map. 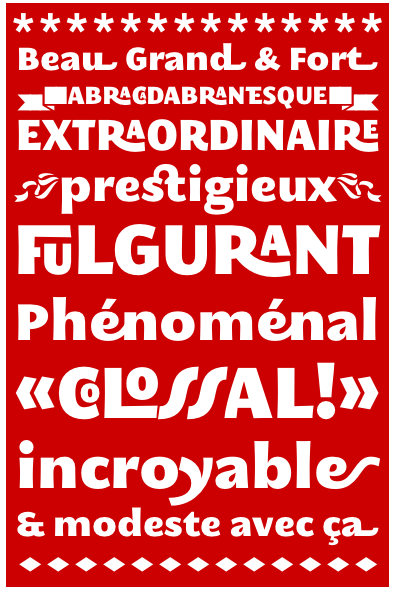 OpenType features also enable better control over alignment. When numbers are listed in tabular form, proportional forms often result in the misalignment of digits across rows, making the list harder to scan. With tabular alignment enabled, individual digits are rendered using a fixed width so that digits align across rows: 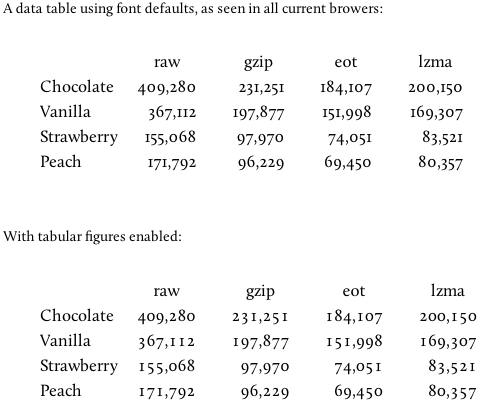 Automatic fractions are also possible with OpenType features, note the inline use of fractional forms in the recipe ingredient list below: 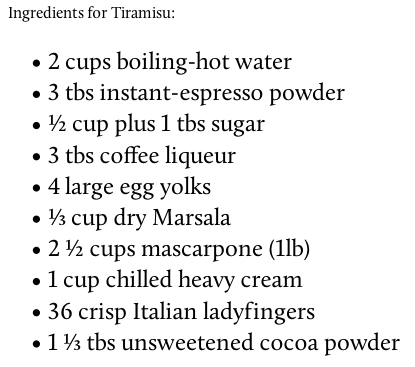 OpenType also includes support for features on a per-language basis. This is important for rendering text correctly in some languages. For example, Turkish uses both a dotted-i and a dotless-i, so the distinction needs to be preserved when rendering ligatures or small caps. Below is the same text in English and Turkish, with both default and language-sensitive renderings shown for the Turkish text: 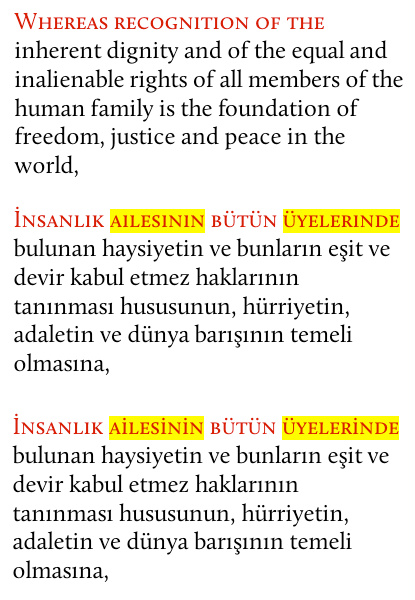 The way text is rendered constantly evolves; glyphs once in common use often morph into other forms, making the historical forms distinct from their modern forms. Below is the text of an old Massachusetts Bay Colony law, taken from a book in the Daniel R. Coquillette Rare Book Room of the Boston College Law Library.

Below is the same text rendered in HTML using the Fell Types revival fonts by Igino Marini with OpenType features enabled. Note the ‘ct’ ligature and the contextual form of the ‘s’: 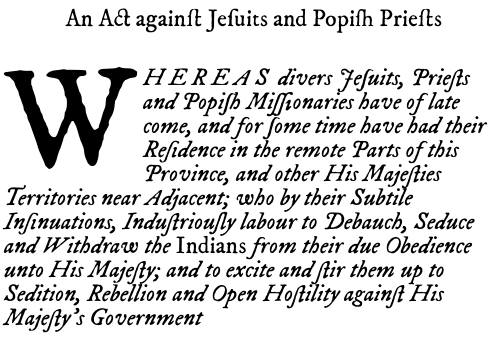