Firefox on Windows is the first desktop browser to support the new WebVR standard (and macOS support is in Nightly!). As the originators of WebVR, Mozilla wanted it to embody the same principles of standardization, openness, and interoperability that are hallmarks of the Web, which is why WebVR works on any device: Vive, Rift, and beyond.

To learn more, check out vr.mozilla.org, or dive into A-Frame, an open source framework for building immersive VR experiences on the Web.

MDN has great documentation on using ... with object literals or for destructuring assignment, and the TC39 proposal also provides a concise overview of this feature.

Over in DevTools, the Network panel now supports filtering results with queries like “status-code:200“. 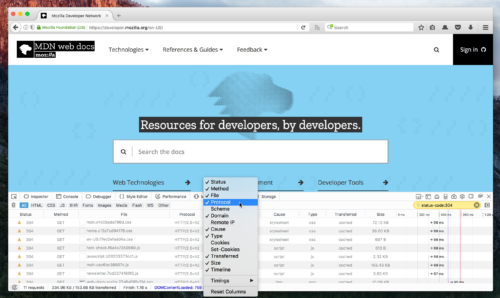 There are also new, optional columns for cookies, protocol, scheme, and more that can be hidden or shown inside the Network panel, as seen in the screenshot above.

Geolocation and Storage join the ranks of powerful APIs like Service Workers that are only allowed on secure, https:// origins. If your site needs a TLS certificate, consider Let’s Encrypt: a completely free, automated, and non-profit Certificate Authority.

Additionally, Firefox 55 will not allow plug-ins to load from or on non-HTTP/S schemes, such as file:.

There are many more changes in the works as we get ready for the next era of Firefox in November. Some users of Firefox 55 will begin seeing our new Firefox Screenshots feature, the Bookmarks / History sidebar can now be docked on either side of the browser, and we just announced three new Test Pilot experiments.

For a complete overview of what’s new, refer to the official Release Notes, MDN’s Firefox 55 for Developers, and the Mozilla Blog announcement .