A new set of Firefox Developer Tools features has just been uplifted to the Aurora channel. These features are available right now in Aurora, and will be in the Firefox 34 release in November. This release brings new tools (storage inspector, WebIDE), an updated profiler, and handy enhancements to the existing tools:

WebIDE, a new tool for in-browser app development, has been enabled by default in this release. WebIDE lets you create a new Firefox OS app (which is just a web app) from a template, or open up the code for an already created app. From there you can edit the app’s files. It’s one click to run the app in a simulator and one more to debug it with the developer tools. Open WebIDE from Firefox’s “Web Developer” menu. (docs)

There’s a new panel that shows the data your page has stored in cookies, localStorage, sessionStorage, and IndexedDB, which was created mostly by Girish Shama. Enable the Storage panel by checking off Settings > “Default Developer Tools” > “Storage”. The panel is read-only right now, with editing ability planned for a future release. (docs) (development notes) (UserVoice request)

The event listener popup in the Inspector now supports jQuery. This means the popup will display the function you attached with e.g. jQuery.on(), and not the jQuery wrapper function itself. See this post for more info and how to add support for your preferred framework. (development notes)

Change the frame you’re debugging using the new frame selection menu. Selecting a frame will switch all of the tools to debug that iframe, including the Inspector, Console, and Debugger. Add the frame selection button by checking off Settings > “Available Toolbox Buttons” > “Select an iframe”. (docs) (development notes)(UserVoice request)

An updated JavaScript profiler appears in the new “Performance” tab (formerly the “Profiler” tab). New to the profiler are a frame rate timeline and categories for frames like “network” and “graphics”. (docs) (development notes) 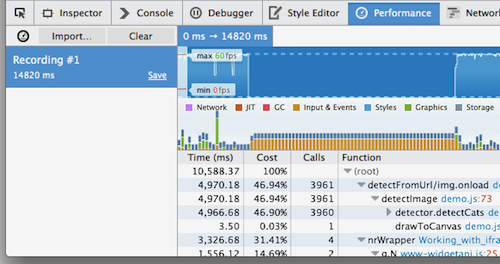 Add a call to console.table() anywhere in your JavaScript to log data to the console using a table-like display. Log any object, array, Map, or Set. Sort a column in the table by clicking on its header. (docs) (development notes)

Hover over a CSS selector in the Inspector or Style Editor to highlight all the nodes that match that selector on the page. (development notes) 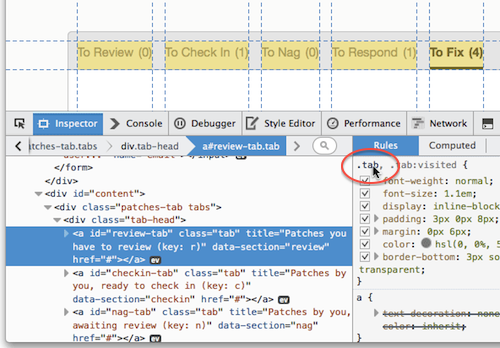 Special thanks to the 41 contributors that added all the features and fixes in this release.

Comment here, shoot feedback to @FirefoxDevTools on Twitter, or propose changes on the Developer Tools feedback channel. If you’d like to help out, check out the guide to getting involved.