By Julian Shapiro
Posted on May 22, 2014 in Animations and JavaScript

What am I getting myself into?

I was never an open source contributor. I had never even filed a GitHub issue. I considered myself an entrepreneur who simply happened to be technical.

But when the startup I wanted to build needed something that didn’t exist, I followed an unprecedented whim and paused everything I was working on. I pulled a hard left, and I wound up spending three months working full-time on a project that I needed ASAP. Equally as motivating, I knew that other developers needed it too.

So, I switched hats. I became an insanely focused, sleeping-isn’t-allowed developer.

The outcome was an animation engine that drastically improved UI performance and workflow across all devices. See it at VelocityJS.org. It’s a powerful JavaScript tool that rivals the performance of CSS transitions. The trick? Simple: In contrast to jQuery (which was initially released in 2006), I was building an engine that incorporated 2014’s performance best practices from the ground-up. No legacy layers; no bloat. Not a Swiss Army knife; a scalpel.

But, throughout my solitary confinement, I was genuinely concerned that I was building something for a customer base of one — myself.

I eventually came to realize that switching hats was actually the wrong approach. I was never supposed to take my startup hat off. (Since normal people don’t wear two hats at once, this is where my metaphor breaks down.)

This is the story of that realization.

Let’s momentarily jump ahead three months — to the time of Velocity’s release. Pardon me for a moment while I gloat:

How was this possible? Because I treated Velocity like I treated my businesses: First, there’s development. That’s 10%. Then, there’s marketing. That’s 90%.

The perspective shift I underwent midway through development was to commit to the following mantra: However much time I wound up spending on development, I would spend even more time on marketing.

After all, that was the time-split I experienced with my startups. I didn’t see a single reason why it should be different for this project. User acquisition is user acquisition.

I’ll quote GitHub’s Zach Holman to get to the root of the dichotomy, “We like to think that open source is pure; that it’s unadulterated. That marketing an open source project is silly. That’s just silly.” – ZachHolman.com

To put it bluntly, if you want your open source project to have an impact, you need to step out of your coder bubble. After all, if you build something amazing — and you market it effectively — you’re doing everyone a favor. Not just yourself.

And don’t worry — being seen publicly marketing your project doesn’t frame you as an egotistical developer. It frames you as someone who’s passionate. If you take the time to appreciate the fact that more people benefiting from your hard work is a major motivation in your pursuit of open source, then you’ll realize that hustling on behalf of your project fits exactly within your pre-existing ideals.

If you look closely at the current open source landscape, those who most often reach the top of GitHub’s charts are developer figureheads with pre-existing followings, and major companies sharing components of their internal stack.

There’s a fair representation of individuals in there, but it’s typically corporations that dominate open source marketing. The reality, however, is that these corporations employ developers that are no better than you or I. There’s no inherent natural selection driving the popularity of their projects versus yours

Fight to get your project out there. Or sit back and watch the marketing teams of huge companies drown your voice out. 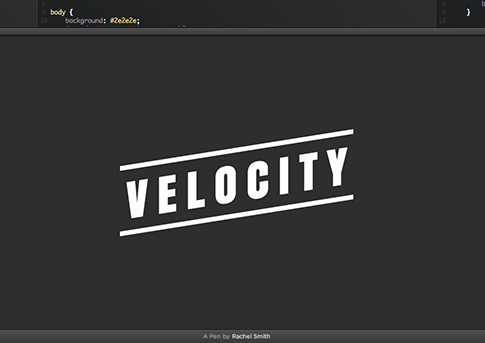 That’s enough with waxing poetic and analyzing the current landscape. Let’s dive into the meaty details: How exactly did I market Velocity?

When you have great documentation, posting to Reddit and Hacker News will take care of itself. Developers recognize their peers’ hard work, and they’re happy to spread the word.

On this topic, do you know what the best-kept secret about open source marketing is? That it’s 100x times easier than startup marketing. It’s less work, and you’ll see success with a much greater degree of certainty. Why? Because developers — as compared to the average web user — are more willing to listen, are more willing to retweet, and are generally less skeptical of your marketing claims. Whereas most web users are tired of being pitched with trite social media products, developers are always on the hunt for better tools. Similarly, the web development press is much easier to get a response from than the mainstream tech news press is. The former is scrounging for good content to share with their users whereas the latter is drowning in a sea of half-backed startup pitches.

Because of the marketing efforts I put into Velocity, and because of the project’s ensuing success, I have become highly motivated to continue working on open source projects.

I am only just getting started: Velocity is the first in a trilogy of libraries that aim to change the way we visually interact with software. If you’re interested in staying on top of my UI exploits, say hello on Twitter: @Shapiro.

Julian Shapiro is a technical founder. His first startup, NameLayer.com, was acquired by Techstars. His current focus is on UI animation. He's working to bring us one step closer to Minority Report. Read more at Julian.com.