Up until now, developing web apps on mobile has been a little tricky.

After spending the time developing your app, getting your users to install it is difficult, especially when the concept of “installing a web app” is not very well defined.

The most popular method is synonymous with adding a shortcut to the homescreen. This is problematic on a number of fronts, not least because the management of web apps – especially around launching, switching between and uninstalling web apps – differs significantly from that of native apps. 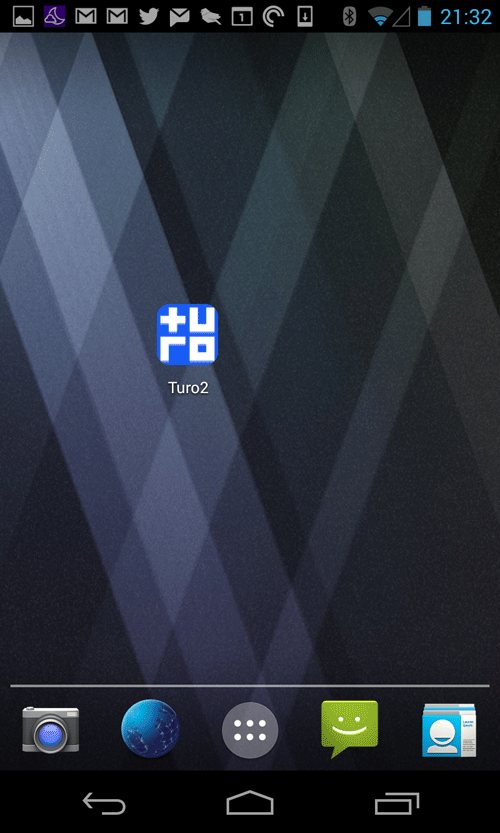 The web app “exists” only on the homescreen, not in the app drawer. 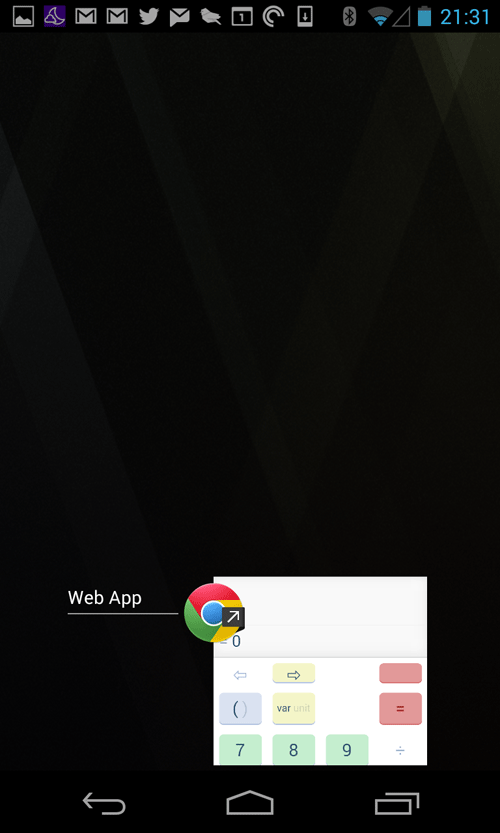 When it’s running, it is not clearly marked in the Recent Apps list.

Even once you get something like a smooth user-flow of installing your app onto the user’s phone’s homescreen, you often find that your app is running in a degraded or out-of-date web view, missing out on compatibility or speed optimizations of a desktop class browser.

What we as developers would like is a modern, fast web runtime, which is kept up-to-date on our devices.

Wouldn’t it also be nice for our users to launch and manage their web apps in the same way as native apps?

We have been working on making web apps be real on the desktop for some time. On the desktop, if you install a web app, Firefox will repackage the app as a desktop app so that it will integrate perfectly with the rest of your system – as outlined in more detail in Progress report on cross-platform Open Web Apps.

That means being in the Start menu on Windows, or in the Launch Control screen on Mac OS X.

From Firefox 29, that will apply to Android too.

This means that as a web developer, you can rely on a modern, up-to-date web runtime on Android to run your web apps. Even better, that web runtime is provided by an ordinary Android app, which means it will stay modern and up-to-date, and you can finally say goodbye to the Android Browser. 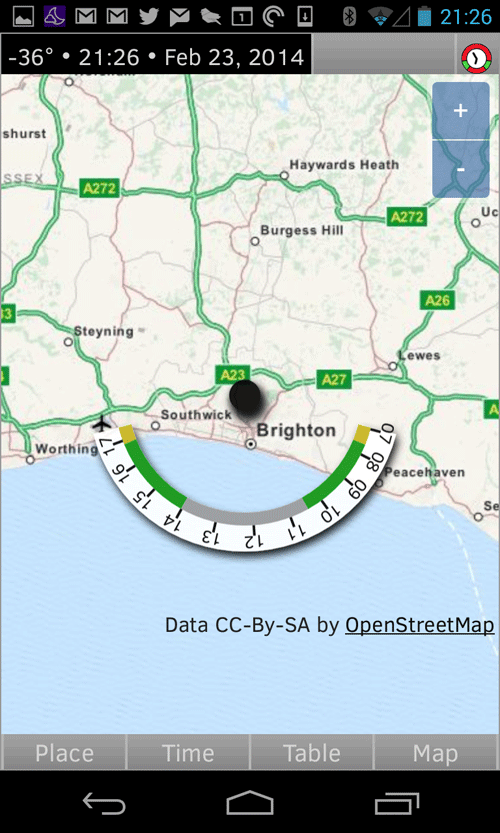 A web app, called ShotClock. Notice its icon in the top right of the screen.

The user will experience your web app as if it is a real native Android app: 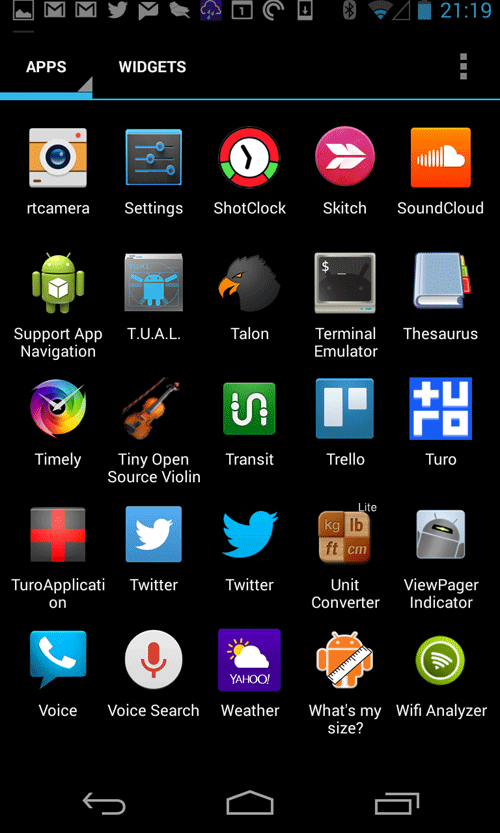 In the App Drawer 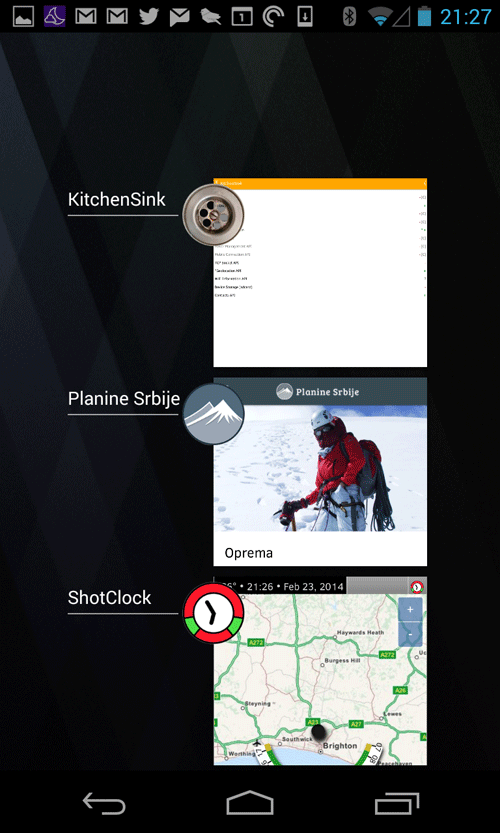 In the Recent Apps list: all these apps are web apps 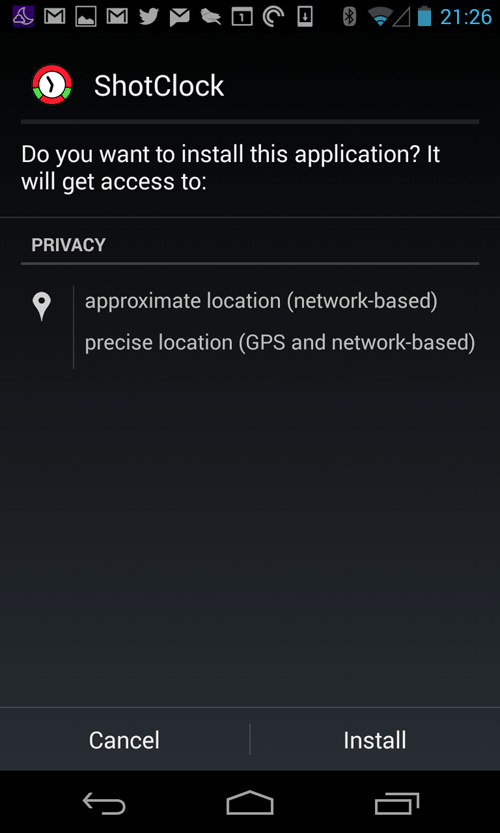 Best yet, is that we make these changes without the developer needing to do anything. As a developer, you get to write awesome web apps, and not worry about different packaging needed to deliver the web app to your users.

On Firefox, you can install an app using the window.navigator.mozApps.install(manifestUrl) method call. Any website can use this API, so any website can become an app store.

The manifestUrl is the URL of a manifest.json document which describes the app to your phone without actually loading the app:

On Firefox for Android, we implement this method by sending the URL to a Mozilla-managed service which builds an Android APK specifically for the app.

APKs created by the Factory use Android’s excellent Resource framework so that the correct icon and translation is displayed to the user, respecting the user’s locale or phone screen.

Web app permissions are rendered as Android permissions, so the user will have a completely native experience of installing your app.

For packaged apps, the APK also includes a copy of the packaged zip file, so that no extra networking is required once the app is downloaded.

For hosted apps, the first time the app is launched, the resources listed in its appcache are downloaded, so that subsequent launches can happen as quickly as possible, without requiring a network connection.

And if you want to detect if the app is running in a web app versus in a webpage, checking the getSelf() method call will help you:

For anything needing changes to the app’s manifest, your users will get an updated APK sent to them to update their existing installation.

For example, if you want to change the app’s icon, or even name, changing the app’s manifest will cause the APK Factory service to regenerate the app’s APK, and notify your users that there is a new version available for install.

For packaged apps, the same mechanism applies: change the app’s package zip file, then update the version number in the app’s manifest file, and the APK Factory will pick up those changes and notify your users that an updated app is available. Your users will get an notified that there’s a new APK to install. Simples.

This is an exciting project. It has very little web developer involvement, and no extra API for developers to use: however, it should represent a step forward in usability of web apps on Android.

Now that we have taken the step to generate APKs for web apps, this gives us a platform for further blurring the lines between web apps and apps. Check it out for yourself and help us improve the feature: get Firefox Beta from the Google Play Store, install apps from the Firefox Marketplace, and let us know what you think!

James is a software engineer who has been working with mobile operating systems since 2009, and with small underpowered computers all his life. At Mozilla he works in the Web Runtime team, spending most of his time persuading the two naughty children "Gecko" and "Android" to play nicely together.