Ember Inspector on a Firefox near you

… or Cross-Browser Add-ons for Fun or Profit

Browser add-ons are clearly an important web browser feature, at least on the desktop platform, and for a long time Firefox was the browser add-on authors’ preferred target. When Google launched Chrome, this trend on the desktop browsers domain was pretty clear, so their browser provides an add-on api as well.

Most of the Web DevTools we are used to are now directly integrated into our browser, but they were add-ons not so long time ago, and it’s not strange that new web developer tools are born as add-ons.

With this goal in mind, I chose Ember Inspector as the target for my cross-browser devtool add-ons experiment, based on the following reasons:

Looking into the ember-extension git repository, we see that the add-on is built from its sources using grunt:

The extension communicates between the developer tools panel, the page and the main extension code via message passing:

Using this knowledge, planning the port to Firefox was surprisingly easy:

In my opinion this port was particularly pleasant to plan thanks to two main design choices:

Most of the JavaScript modules which compose this extension were already browser independent, so the first step was to bootstrap a simple Firefox Add-on and register a new devtool panel.

Create a new panel into the DevTools is really simple, and there’s some useful docs about the topic in the Tools/DevToolsAPI page (work in progress).

Then, moving to the second step, adapt the code used to create the message channels between the devtool panel and injected code running in the target tab, using content scripts and the low level content worker from the Mozilla Add-on SDK, which are well documented on the official guide and API reference:

Evaluate its features and dive into the exchanged messages

At this point one could wonder: how much useful is a tool like this?, Do I really need it? etc.

I must admit that I’ve started and completed this port without being an experienced EmberJS developer, but to be able to check if all the original features were working correctly on Firefox and to really understand how this browser add-on helps EmberJS developers during app development/debugging phases (its most important use cases), I’ve started to experiment with EmberJS and I have to say that EmberJS is a very pleasant framework to work with and Ember Inspector is a really important tool to put into our tool belts.

I’m pretty sure that every medium or large sized JavaScript framework need this kind of DevTool; clearly it will never be an integrated one, because it’s framework-specific and we will get used to this new family of DevTool Add-ons from now on.

The first use case is being able to immediately visualize Routes, Views/Components, Models and Controllers our EmberJS app instantiate for us, without too much webconsole acrobatics.

So its immediately available (and evident) when we open its panel on an EmberJS Apps active in the current browser tab: 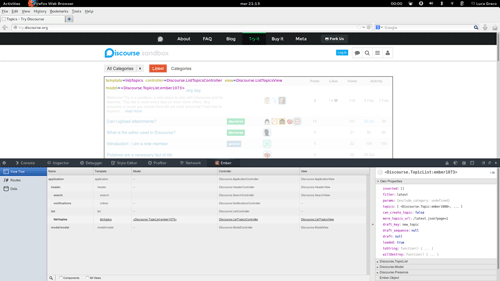 Using these tables we can then inspect all the properties (even computed ones) defined by us or inherited from the ember classes in the actual object hierarchy.

Using an approach very similar to the Mozilla Remote Debugging Protocol from the integrated DevTools infrastructure (e.g. even when we use devtools locally, they exchange JSON messages over a pipe), the ember_debug component injected into the target tab sends the info it needs about the instantiated EmberJS objects to the devtool panel component, each identified by internally generated reference IDs (similar to the grips concept from the Mozilla Remote Debugging Protocol.

Logging the exchanged messages, we can learn more about the protocol.

Reach every EmberJS object in the hierarchy from the webconsole

A less evident but really useful feature is “sendToConsole”, to be able to reach any object/property that we can inspect from the webconsole, from the tables described above.

When we click the >$E link, which is accessible in the right split panel: 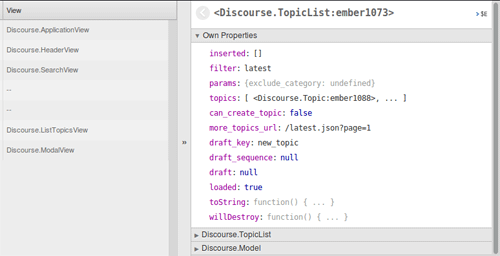 The ember devtool panel asks to ember_debug to put the defined object/property into a variable accessible globally in the target tab and named $E, then we can switch to the webconsole and interact with it freely: 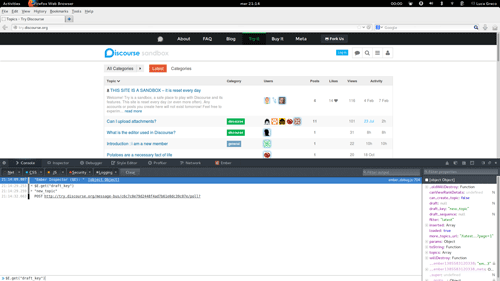 These are only some of the feature already present in the Ember Inspector and more features are coming in its upcoming versions (e.g. log and inspect Ember Promises).

If you already use EmberJS or if you are thinking about trying it, I suggest you to give Ember Inspector a try (on both Firefox or Chrome, if you prefer), it will turn inspecting your EmberJS webapp into a fast and easy task.

Chrome crx extensions are simply ZIP files, as are Firefox XPI add-ons, but Firefox add-ons based on the Mozilla Add-on SDK needs to be built using the cfx tool from the Add-on SDK package.

If we want more cross-browser add-ons, we have to help developers to build cross-browser extensions using the same approach used by ember-extension: a webapp built using grunt which will run into a browser add-on (which provides glue code specific to the various browsers supported).

So I decided to move the grunt plugin that I’ve put together to integrate Add-on SDK common and custom tasks (e.g. download a defined Add-on SDK release, build an XPI, run cfx with custom parameters) into a separate project (and npm package), because it could help to make this task simpler and less annoying.

Especially thanks to the help from the EmberJS/EmberInspector community and its maintainers, Ember Inspector Firefox add-on is officially merged and integrated in the automated build process, so now we can use it on Firefox and Chrome to inspect our EmberJS apps!

Thanks to the same web first approach Mozilla is pushing in the Apps domain creating cross-browser add-ons is definitely simpler than what we thought, and we all win :-)