If you’ve seen Epic Games’ HTML5 port of ‘Epic Citadel’, you have no doubt been impressed by the amazing performance and level of detail. A lot of the code that creates the cool visual effects you see on screen are written as shaders linked together in programs – these are specialized programs that are evaluated directly on the GPU to provide high performance real-time visual effects.

Writing Vertex and Fragment shaders are an essential part of developing 3D on the web even if you are using a library, in fact the Epic Citadel demo includes over 200 shader programs. This is because most rendering is customised and optimised to fit a game’s needs. Shader development is currently awkward for a few reasons:

Here is a screencast that shows a how to manipulate shader code using a relatively simple WebGL demo:

Starting in Firefox 27 we’ve introduced a new tool called the ‘Shader Editor’ that makes working with shader programs much simpler: the editor lists all shader programs running in the WebGL context, and you can live-edit shaders and see immediate results without interrupting any animations or state. Additionally editing shaders should not impact WebGL performance.

The Shader Editor is not shown by default, because not all the web pages out there contain WebGL, but you can easily enable it: 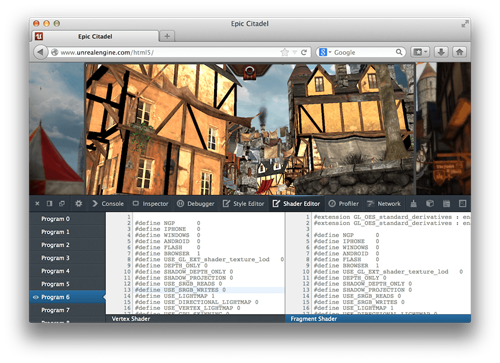 The first thing you’ll notice about Shader program code is that it is not JavaScript. For more information on how Shader programs work, I highly recommend you start with the WebGL demo on the Khronos wiki and/or Paul Lewis’ excellent HTML5 Rocks post. There also some great long standing tutorials on the Learning WebGL blog. The Shader Editor gives you direct access to the programs so you can play around with how they work:

Learn more about the Shader Editor on the Mozilla Developer Network.

Here is a second screencast showing how you could directly edit the shader programs in the Epic Citadel demo: