Building a Notes App with IndexedDB, Redis and Node.js

By Robert Nyman [Editor emeritus]
Posted on May 16, 2013 in IndexedDB and Node.js

In this post, I’ll be talking about how to create a basic note-taking app that syncs local and remote content if you are online and defaults to saving locally if offline. 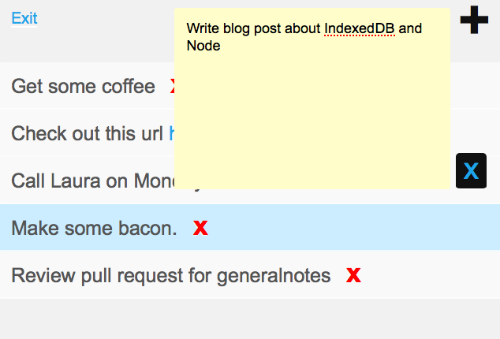 Using Redis on the server-side

When adding records in Redis, we aren’t working with a relational database like in MySQL or PostgreSQL. We are working with a structure like IndexedDB where there are keys and values. So what do we need when we only have keys and values to work with for a notes app? We need unique ids to reference each note and a hash of the note metadata. The metadata in this example, consists of the new unique id, a creation timestamp and the text.

Below is a way of creating an id with Redis in Node and then saving the note’s metadata.

This gives us the following key pattern for all notes on the server-side:

Adding IndexedDB on the client-side

Working with IndexedDB requires more code than localStorage. But because it is asynchronous, it makes it a better option for this app. The main reason for why it is a better option is two-fold:

Both do not equate to an ideal experience for the user – but what if we want to have the ease of localStorage’s API with the asynchronous features of IndexedDB? We can use Gaia’s async_storage.js file to help merge the two worlds.

If we’re offline, we need to do two things similar to the server-side:

The structure of the IndexedDB keys are very similar to the Redis ones. The pattern is as follows:

Once we’re online, we can upload the local notes, save the remote ones on the client-side and then delete the local ones.

Triggering note.js on the client-side

Whenever we refresh the page, we need to attempt a sync with the server. If we are offline, let’s flag that and only grab what we have locally.

The code above provides the basics for a CRD notes app with support for local and remote syncing. But we’re not done yet.

On Safari, IndexedDB is not supported as they still use WebSQL. This means none of our IndexedDB code will work. To make this cross-browser compatible, we need to include a polyfill for browsers that only support WebSQL. Include this before the rest of the code and IndexedDB support should work.

You can try out the app at http://notes.generalgoods.net

To view the code for this app feel free to browse the repository on Github.