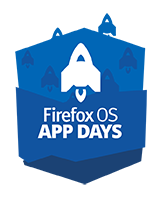 If you’re a developer interested in web technologies, I’d like to invite you to participate in Firefox OS App Days, a worldwide set of 20+ hack days organized by Mozilla to help you get started developing apps for Firefox OS.

At each App Day event, you’ll have the opportunity to learn, hack and celebrate Firefox OS, Mozilla’s open source operating system for the mobile web. Technologists and developers from Mozilla will present tools and technology built to extend and support the Web platform, including mobile Web APIs to access device hardware features such as the accelerometer. We’ll also show you how to use the browser-based Firefox OS Simulator to view and test mobile apps on the desktop.

Firefox OS App Days are a chance to kick start creation of apps for the Firefox Marketplace, and represent a great opportunity to build new apps or optimize existing HTML5 apps for Firefox OS, as well as demo your projects to an audience of peers, tech leaders and innovators.

We’re exciting to be working with our Mozilla Reps, who are helping organize these events, and with our partners Deutsche Telecom and Telefónica, who are supporting a number of them across the world.

We look forward to seeing you there!

The agenda for these all-day events will be customized for each locale and venue, but a typical schedule might include:

Firefox OS App Days launch on 19 January and continue through 2 February, with the majority of the events taking place on 26 January. This wiki page has a master list of all the events and their registration forms, from Sao Paulo to Warsaw to Nairobi to Wellington — and many more. Find the App Day nearest you and register. (N.B. Venue capacities vary, but most are limited to 100 attendees so don’t delay.)

If you want to get started before the event, review the material below and bring an HTML5 app that you’ve begun and want to continue, get feedback on or recruit co-developers for.

Mark is the former SVP of Engineering at Actuate, a public company in the Business Intelligence space. He is co-founder of the BIRT open source project at the Eclipse Foundation, and is the author of six crime novels set in the Silicon Valley.