By Luca Greco
Posted on November 14, 2012 in Featured Article, Firefox OS, and HTML

This blog post is written by Luca Greco, a Mozilla community member who loves to hack, especially on JavaScript and other web-related technologies.

A lot of developers are already creating mobile applications using Web technologies (powered by containers like Phonegap/Cordova as an example),
usually to develop cross platform applications or leverage their current code and/or expertise.

As a consequence Firefox OS is a very intriguing project for quite a few reasons:

Mobile platforms based on web technologies can be the future, and we can now touch it, and even more important, we can help to define it and push it further thanks to a platform (Firefox OS) developed completely in the open. I could not resist the temptation, so I started to dive into Firefox OS code, scrape it using MXR and study documentation on the wiki.

In a couple of weeks I was ready to put together an example app and an unofficial presentation on the topic (presented at the local LinuxDay 2012): 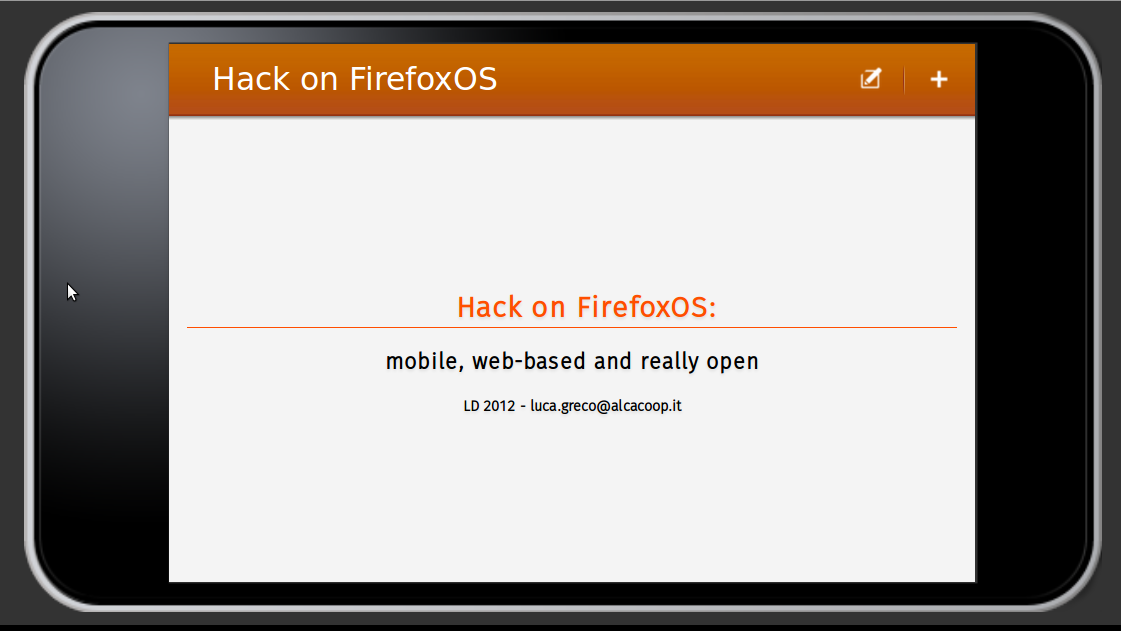 During this presentation I tried to highlight an important strength I believe Firefox OS and Firefox have in common:

“It’s not a static build, it’s alive! a truly interactive environment. Like the Web”

I can telnet inside a B2G instance and look around for interesting stuff or run JavaScript snippets to interactively experiment the new WebAPIs. There’s more than one option to get a remote JavaScript shell inside B2G:

Unfortunately these tools currently lack integrated inspection utils (e.g. console.log/console.dir or MozRepl repl.inspect and repl.search), so during the presentation I opted to install MozRepl as extension on the B2G simulator, but in the last weeks Remote WebConsole landed into Firefox Nightly.

Obviously RemoteWebConsole isn’t mature yet, so we need to be prepared for bugs and silent errors (e.g. we need to be sure B2G has “remote debugger” enabled or it will fail without errors), but it features objects inspection, network progress logging, JavaScript and CSS errors (like our local Firefox WebConsole). 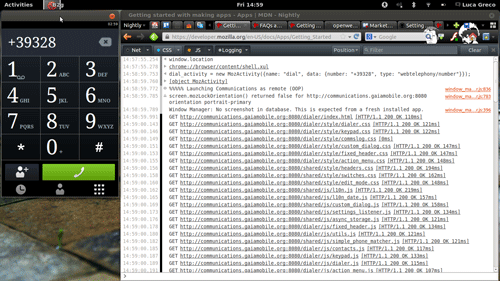 In my experience, developing an OpenWebApps for Firefox OS isn’t really different from hybrid applications based on Phonegap-like technologies:

We’ll try to code and test major parts of our application on desktop browsers and their development tools, using mockups/shims in place of native functionalities. But during my 2 weeks of studying, I’ve collected an interesting amount of working notes that can be useful to share, so in next sections I’m going to:

As an example app, I’ve chosen to create a simple chronometer: 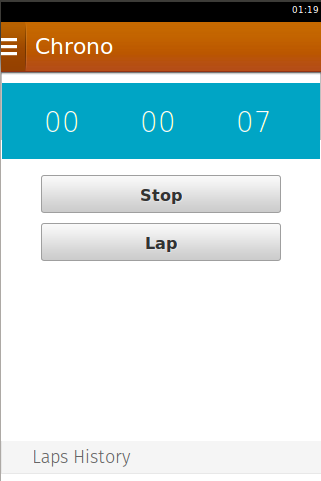 During this experience my toolset was composed by:

Using Volo, I can test my app from volo integrated http server, split JavaScript code into modules using Require.js, and finally generate a production version, minified and optionally equipped of an auto-generated manifest.appcache.

During my development cycle I iteratively:

Using my favorite desktop browser (Firefox, obviously :-P), I have the chance to use very powerful inspection/debugging tools, not usually available on mobile web-runtimes:

Thanks to new Mozilla projects like “Firefox OS” and “Firefox for Android”, more and more of these tools are now available as “Remote Web Tools” and can be connected to a remote instance.

Gaia isn’t only a B2G UI implementation, it’s a design style guide and a collection of pre-built CSS styles which implements these guidelines:

We can import components’ styles from the repo above and apply them to our app to achieve a really nice native Look & Feel on Firefox OS. Some components are not stable, which means they can interact badly with other components’ styles or doesn’t work perfectly on all platforms (e.g. Firefox Desktop or Firefox for Android), but usually it’s nothing we can’t fix by using some custom and more specific CSS rules.

It doesn’t feel like a mature and complete CSS framework (e.g. Bootstrap) but it’s promising and I’m sure it will get better.

Using Responsive Design View we can test different resolutions (and orientations), which helps to reach a good and consistent result even without test our app on Firefox OS or Firefox for Android devices, but we should keep an eye on dpi related tweaks, because we currently can’t fully recognize how it will looks using our Desktop browser.

A lot of apps needs more than one panel, so first I looked inside official Gaia applications to understand how native apps implements this almost mandatory feature. This is how Gaia Clock application appear from a “Tilt” eye: 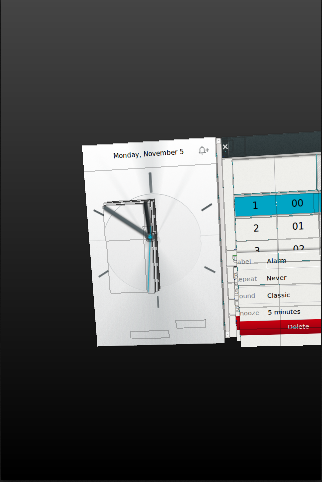 Panels are simple DOM elements (e.g. a section or a div tag) initially positioned offscreen and moved on screen using a CSS transition: 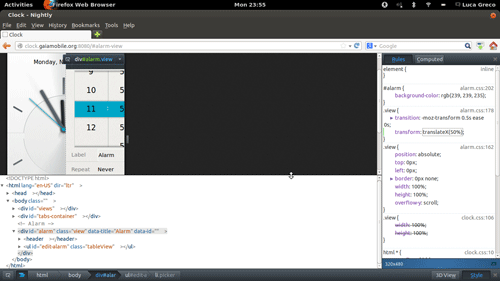 In the “Chrono” app, you will find this strategy in the Drawer (an unstable Gaia UI Building Block): 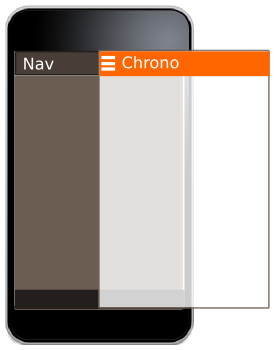 and in the Laps and About panels (combinated with :target pseudo class): 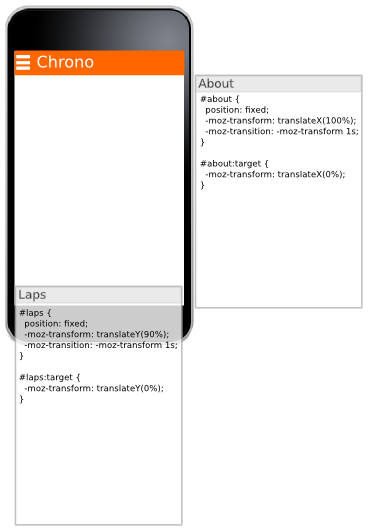 This is a very fascinating trick, used in the time selector component on Firefox OS: 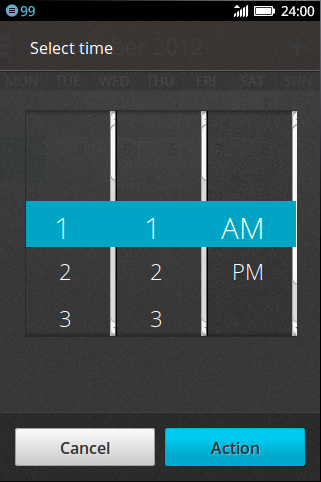 and in the Markup View on Firefox Nightly Desktop (currently disabled):

Thanks to this non-standard CSS feature we can use a DOM Element as background image on another one, e.g. integrating a complex offscreen visual component into the visible space as a single DOM element. 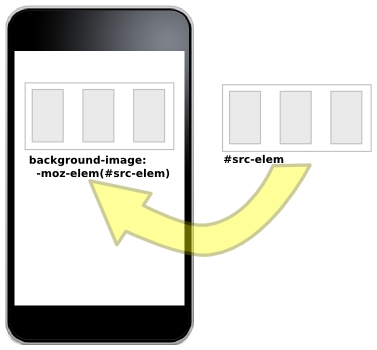 Using -moz-element and -moz-calc (compute components size into CSS rules and already included into CSS3 as calc) is really simple, but you can learn more on the subject on MDN:

Release to the public

During our development cycle we install our application into B2G simulator using an R2D2B2G menu option, so we don’t need a real manifest.webapp, but we have to create a real one when ready for a public release or to release it to test users.

Creating a manifest.webapp is not difficult, it’s only a simple and well documented json file format: App/Manifest on MDN.

Debugging problems related to this manifest file is still an unknown territory, and some tips can be useful: 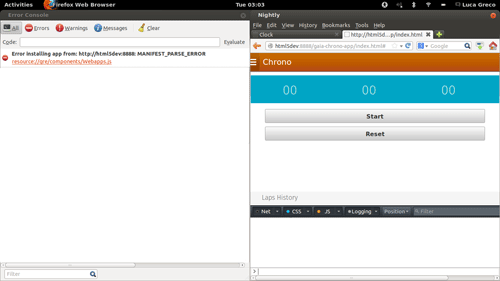 Using OpenWebApps APIs, I added to “Chrono” some code to give users the ability to install itself:

Install an app from your browser to your desktop system

Check if it’s already installed (as a webapp runtime app or a self-service installer in a browser tab):


On a Linux Desktop, when you install an OpenWebApp from Firefox, it will create a new launcher (an “.desktop” file) in your “.local/share/applications” hidden directory:

As you will notice, current conventions (and implementation) supports only one application per domain, if you give a look inside the hidden directory of our installed webapp you will find a single webapp.json config file:

Reasons for this limitations are documented on MDN: FAQs about app manifests

To help yourself debugging problems when you app is running inside the webapp runtime you can run it from command line and enable the old (but still useful) Error Console: 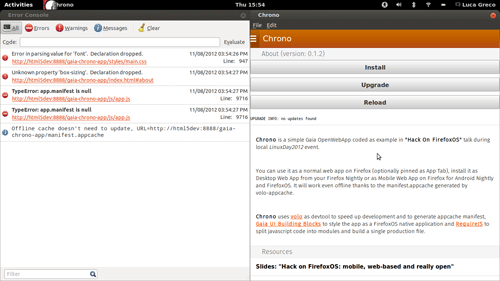 Uninstalling an OpenWebApp is really simple, you can manually removing it using the “wbapprt-stub” executable in the “OpenWebApp hidden directory” (platform dependent method):

Or from JavaScript code, as I’ve done in “Chrono” to give users the ability to uninstall the app from a Firefox Browser tab:

This is a feature integrated a lot of time ago into major browsers, but now, thanks to OpenWebApps, it’s becoming really mandatory: without a manifest.appcache, and proper JavaScript code to handle upgrades, our WebApp will not works offline correctly, and will not feel like a real installed application.

Currently Appcache it’s a kind of black magic and it deserves a “Facts Page” like Chuck Norris: AppCacheFacts.

Thanks to volo-appcache command, generate a manifest.appcache it’s simple as a single line command:

Unfortunately when you need to debug/test your manifest.appcache, you’re on your own, because currently there isn’t any friendly debugging tool integrated into Firefox:

Debug appcache problems can be very tricky, so here a couple of tricks I learned during this experiment: 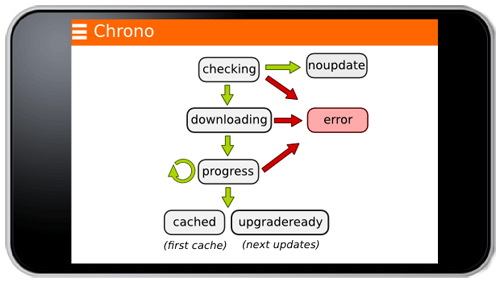 Adding applicationCache support to “Gaia Chrono App”, I used all this tricks to finally discover Firefox didn’t send me an “updateready” event, so I was not able to tell the user to reload the page to start using the new (and already cached) version. With a better understanding of the problem, and searching in the code on MXR and in tickets on Bugzilla, I finally found an existing ticket in the bugtracker: Bug 683794: onupdateready event not fired when an html5 app cache app is updated.

Workaround this bug its really simple (simpler than tracking it down): add a dummy “updateready” listener on applicationCache object in a script tag to be sure it will be fired:

If you are going to start to use this feature (and soon or later you will), be prepared to:

This is definitely a features that needs more supports into web developer tools, because a regular web developer doesn’t want to debug his webapp from “browser internals” point of view.

Port to Firefox for Android

An interesting feature of OpenWebApps is “they can be installed on any supported platform without (almost) any changes”. As an example we can install our “Chrono” App on our Desktop using Firefox Nightly and on Android using Firefox for Android Nightly.

In my own opinion, Firefox for Android can be a strategic platform for the future of OpenWebApps and even Firefox OS: Android is an already popular mobile platform and give developers the option to release their application on Firefox OS and Android from a single codebase is a big plus.

The only problem I faced porting “Chrono” App on Android was related to the different rendering behaviour of Firefox for Android (and as a consequence in the WebAppRT, which contains our application):

A GeckoScreenshot service will force a repaint only when and where it detects changes. This feature interacts badly with the -moz-element trick and it needs some help to understand what really needs to be repainted:

Release to the public

GitHub pages are a rapid and simple option to release our app to the public, even simpler thanks to the volo-ghdeploy command:

When you deploy your OpenWebApp in a subdirectory of a given domain (e.g. using Github Pages) you should take into account that paths from manifest.webapp needs to be relative to your origin (protocol+host+port) and not your current url:

When our app is finally online and public accessible we can submit it to the Mozilla Marketplace and gain more visibility.

During the app submission procedure, your manifest.webapp will be validated and you will be warned if and how you need to tweak it to be able complete your submission:

As in other mobile marketplaces you should collect and fill into your submission:

Mozilla Marketplace goal is to help OpenWebApps to gain more visibility, as other mobile store currently do for their ecosystem, but Mozilla named this project OpenWebApps for a reason:

Mozilla isn’t the only one that could create a Marketplace for OpenWebApps! Mozilla designed it to give us the same freedom we have on the Web, no more no less. 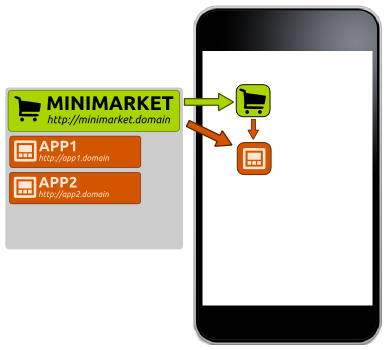 This is a very powerful feature because it open to developers a lot of interesting use cases:

You should seriously take a look at Firefox OS: