By Ondřej Žára, Robin Hawkes
Posted on March 9, 2012 in Games 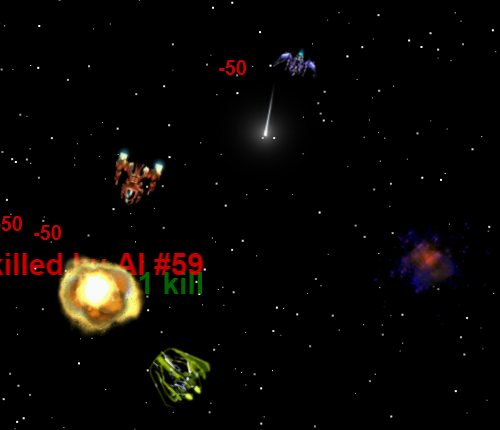 Experimenting with modern web technologies is always fun. For my latest project, I came up with the following requirements:

I worked on this project only in my spare time; after approx. two weeks, the work was done: Just Spaceships! This article describes some decisions and approaches I took during the development. If you are interested in the code, you can check the relevant Google Code project.

There are two basic ways to maintain an animation: requestAnimationFrame and setTimeout/setInterval. What are their strengths and weaknesses?

To solve animation-related stuff, I created a HTML5 Animation Framework (HAF), which combines both approaches together. Two independent loops are used: one for simulation, the second one for rendering. Our objects (actors in HAF terminology) must implement two basic methods:

Note that the tick method returns a boolean value: it corresponds to the fact that a (visual) position of an object might (or might not) change during the simulation. HAF takes care of this – when it comes to rendering, it redraws only those actors that returned true in their tick method.

Just Spaceships makes extensive use of sprites; pre-rendered images which are drawn to canvas using its drawImage method. I created a benchmarking page which you can try online; it turns out that using sprites is way faster than drawing stuff via beginPath or putImageData.

Most sprites are animated: their source images contain all animation frames (such as in CSS sprites) and only one frame (rectangular part of the full source image) is drawn at a time. Therefore, the core drawing part for an animated sprite looks like this:

By the way: the sprites for Just Spaceships! have been taken from Space Rangers 2, my favourite game.

The golden rule of rendering is intuitive: redraw only those parts of the screen which actually changed. While it sounds pretty simple, following it might turn out to be rather challenging. In Just Spaceships, I took two different approaches for re-drawing sprites:

Using HTML5 audio is a piece of cake – at least for desktop browsers. There were only two issues that needed to be taken care of:

At the end of the day, the audio code looks basically like this:

Choosing a proper networking model is crucial for user experience. For a realtime game, I decided to go with a client-server architecture. Every client maintains a WebSocket connection to central server, which controls the game flow.

In an ideal world, clients would send just keystrokes and the server would repeat them to other clients. Unfortunately, this is not possible (due to latency); to maintain consistency and synchronicity between players, it is necessary to run the full simulation at server and periodically notify clients about various physical attributes of ships and other entities. This approach is known as an authoritative server.

Finally, clients cannot just wait for server packets to update their state; players need the game to work even between periodical server messages. This means that browsers run their version of the simulation as well – and correct their internal state by data sent by server. This is known as a client-side prediction. A sample implementation of these principles looks like this:

You can find very useful reading about this at Glenn Fiedler’s site.

Choosing a server-side solution was very easy: I decided to go with v8cgi, a multi-purpose server-side javascripting environment, based on V8. Not only it is older than Node, but (most importantly) it was created and maintained by myself ;-).

The advantage of using server-side JavaScript is obvious: game’s server runs the identical code that is executed in browser. Even HAF works server-side; I just turned off its rendering loop and the simulation works as expected. This is a cool demonstration of client-server code sharing; something we will probably see more and more in the upcoming years.

In order to make the game more interesting and challenging, I decided that the whole playing area should wrap around – think of the game universe as of a large toroidal surface. When a spaceship flies far to the left, it will appear from the right; the same holds for other directions as well. How do we implement this? Let’s have a look at a typical simulation time step:

To create an illusion of a wrapped surface, we need the ship to remain in a fixed area of a given size. A modulus operator comes to help:

However, there is a glitch. To see it, we have to solve this (elementary school) formula:

JavaScript’s answer is -2; Python says 3. Who is the winner? The correctness of the result depends on the definition, but for my purpose, the positive value is certainly more useful. A simple trick was necessary to correct JavaScript’s behavior:

Here is a short summary of general tips & hints I gathered when developing JS games in general, but mostly during Just Spaceships development:

As stated before, Just Spaceships is not a complete project. There is definitely room for improvements, most notably:

Even with these unfinished issues, I think the game reached a playable state. We had quite a lot of fun testing its multiplayer component; I hope you will enjoy playing it!

Ondřej Žára likes to experiment with anything related to JavaScript, HTML5 and other web technologies. He showcases many of his projects at http://ondras.zarovi.cz/. He is currently employed at Seznam.cz, a.s., focusing mainly on popular mapping service Mapy.cz as well as HTML5 evangelism. From time to time, he tweets about JS stuff as @0ndras.