By Chris Mills
Posted on April 7, 2020 in Featured Article, Firefox, and Firefox Releases

Even in these times of isolation, our engineering teams have adapted, kept focused, and worked hard to bring you another exciting new edition of Firefox. On the developer tools side, you’ll find instant evaluation in the console, event breakpoints for WebSockets, and many other things besides. On the web platform side, new additions include HTML lazy loading for images, the CSS min(), max(), and clamp() functions, public static class fields, and additions to Web Animations API support.

As always, read on for the highlights, or find the full list of additions in the following articles:

Let’s start by reviewing the most interesting Developer Tools additions for 75.

Evaluating expressions in the Console is a rapid way to explore your application state, query the DOM, or just try out JavaScript APIs. It’s now easier to prototype longer code with Firefox’s multi-line Console mode, which becomes ever friendlier and more IDE-like to use.

The new Instant evaluation previews the results of the current expression as you type, similar to editors like Quokka.js. As long as expressions typed into the Web Console are side-effect free, their results will be previewed while you type.

A lot of polish went into making the preview as seamless as possible. Elements for DOM nodes in results are highlighted. The in-code autocomplete recommends methods and properties based on the result type. Also, you can preview errors to help you fix expressions faster. 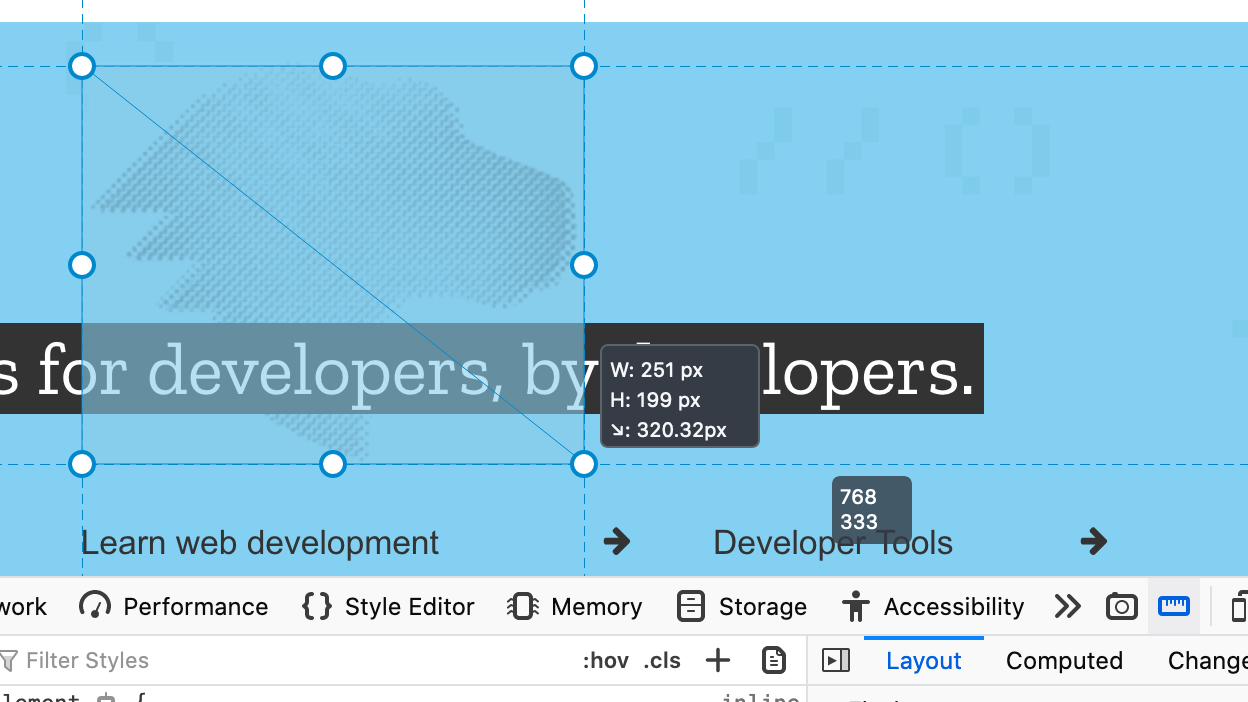 Using the optional area measurement tool in DevTools you can quickly draw rectangles over your page to measure the height, width, and diagonal length of specific areas. You can enable the tool in the settings, under “Available Toolbox Buttons”. Thanks to Sebastian Zartner [:sebo], these rectangles now have resize-handles, so you can adjust them precisely.

Use XPath to find DOM elements

XPath queries are commonly used in automation tools to tell software which elements to look for and interact with. Thanks again to sebo, you can now use XPath in the Inspector’s HTML search for DOM elements. This makes it easier to test expressions and fine-tune queries on real sites.

WebSocket inspection features have improved in every recent DevTools release. This time there’s a nice addition to debugging, thanks to a contribution from the talented Chujun Lu.

You now have the option to either pause or log when WebSocket event handlers are executed. Use the newly-added Event Listener Breakpoints in the Debugger. When you select the Log option, event data and the handler that’s been executed will be logged, but execution will not pause.

A lot of quality and performance work went into the Network panel for Firefox 75. This release marks major improvements for how fast simultaneous quick-firing requests are rendered without taxing your CPU.

On the interface side, contributor Florens Verschelde drove the proposal and design for adding borders between columns to aid readability. Note how the design is more consistent with the overall look of the DevTools. Filter buttons are also more legible, with improved contrast between states, thanks to contributor Vitalii.

The Request Blocking panel helps you test how resilient your site is when matched requests fail. It now allows wildcard patterns with “*”. Thanks to Duncan Dean for that contribution.

Developer Edition is Firefox’s pre-release channel. It provides early access to tooling and platform features. Its settings also enable more functionality for developers by default. We like to bring new features quickly to Developer Edition to gather your feedback, including the following highlights.

Modern JavaScript code depends heavily upon stacking async/await on top of other async operations like events, promises, and timeouts. Thanks to better integration with the JavaScript engine, async execution is now captured to provide a more complete picture.

Async call stacks in the Debugger let you step through events, timeouts, and promise-based function calls that are executed over time. In the Console, async stacks make it easier to find the root causes of errors.

Lazy loading is a common strategy to improve performance by identifying resources as non-blocking (non-critical) and loading them only when needed, rather than loading them all immediately. Images are one of the most common assets to be lazy-loaded in web apps.

To make lazy loading images easier, we have introduced support for the load attribute on the HTML <img> element. Setting the value to lazy will instruct the browser to defer loading of images that are off-screen until the user scrolls near them. The only other possible value is eager, which is the default value as you’d expect.

You can determine if a given image has finished loading by examining the value of its boolean complete property.

Note: The load event fires when the eagerly-loaded content has all been loaded. At that time, it’s possible (or even likely) that there may be lazily-loaded images within the visual viewport that have yet to load.

Note: Chrome has also implemented experimental support for lazy loading of <iframe> content, but this is not in a standard yet; we are waiting until it has been standardized.

Some exciting new CSS additions this month! We have added support for three very useful CSS functions that are closely-related to each other but have different purposes:

These functions are very useful for responsive design, and can save a lot of time and code doing things that you might previously have done using a combination of min-width, width, and max-width, multiple media queries, or even JavaScript.

The top level heading’s font-size is set to clamp(1.8rem, 2.5vw, 2.8rem). Thus, it will be a minimum of 1.8rem, and a maximum of 2.8rem. In between those values, the ideal value of 2.5vw will kick in, so you will see the header text grow and shrink at viewport widths where 2.5vw is computed as larger than 1.8rem, but smaller than 2.8rem.

The paragraph font-size is set to max(1.2rem, 1.2vw), meaning that it will be a minimum of 1.2rem. But it will start to grow at the point that 1.2vw’s computed value is larger than 1.2rems’ computed value.

You can see this in action in our min(), max(), clamp() simple example.

There have been a few interesting JavaScript additions in 75.

First of all, we’ve now got public static class fields. These are useful when you want a field to exist only once per class, not on every class instance you create. This is particularly relevant for cache, fixed-configuration, or any other data you don’t need to replicate across instances. The basic syntax looks like so:

Next up, we’ve got another boost to internationalization (i18n) functionality with the addition of Intl.Locale, a standard built-in constructor that represents a Unicode locale identifier. For example, you could create a Korean locale object like so:

And then return properties of the object as you’d expect:

We’ve got a couple of useful form-specific API additions in Firefox 75:

In 75, we’ve added a number of new Web Animations API features, making this spec even more interesting and useful.

From now on, you are able to set a beginning or end state for an animation only (i.e., a single keyframe). The browser will then infer the other end of the animation if it is able to. For example, consider this simple animation — the keyframe object looks like so:

We have only specified the end state of the animation, and the beginning state is implied.

It is possible to trigger a large number of animations on the same element. If they are indefinite (i.e., forwards-filling), this can result in a huge animations list, which could create a memory leak. For this reason, we’ve implemented the part of the Web Animations spec that automatically removes overriding forward filling animations, unless the developer explicitly specifies to keep them.

You can see this in action in our simple replace indefinite animations demo. The related JavaScript features are as follows:

The Animation.timeline getter, Document.timeline, DocumentTimeline, and AnimationTimeline features are now enabled by default, meaning that you can now access your animation’s timeline information. This feature is invaluable for returning time values for synchronization purposes.

In Firefox 75 (on Linux and Windows), you’ll see the addition of support for a set of new accessibility features collectively known as ARIA annotations, which are set to be published in the upcoming WAI-ARIA version 1.3 specification. These features make it possible to create accessible annotations within web documents. Typical use cases include edit suggestions (i.e., an addition and/or deletion in an editable document), and comments (e.g. an editorial comment related to a part of a document under review).

There is no screenreader support available for ARIA Annotations yet, but soon we’ll be able to make use of these new roles and other attributes. For examples and more support details, read ARIA Annotations on MDN.

Two new browserSettings have been added to the WebExtensions API: zoomFullPage to zoom the text on a page and zoomSiteSpecific, which determines if zoom applies to only the active tab or all tabs of the same site.

So there you have it. We’ve packed Firefox 75 with interesting new features; check them out, and have fun playing! As always, feel free to give feedback and ask questions in the comments.

Chris Mills is a senior tech writer at Mozilla, where he writes docs and demos about open web apps, HTML/CSS/JavaScript, A11y, WebAssembly, and more. He loves tinkering around with web technologies, and gives occasional tech talks at conferences and universities. He used to work for Opera and W3C, and enjoys playing heavy metal drums and drinking good beer. He lives near Manchester, UK, with his good lady and three beautiful children.