By Reuben Morais
Posted on December 5, 2019 in Audio, Featured Article, and Speech

Our latest release, version v0.6, offers the highest quality, most feature-packed model so far. In this overview, we’ll show how DeepSpeech can transform your applications by enabling client-side, low-latency, and privacy-preserving speech recognition capabilities.

DeepSpeech v0.6 includes a host of performance optimizations, designed to make it easier for application developers to use the engine without having to fine tune their systems. Our new streaming decoder offers the largest improvement, which means DeepSpeech now offers consistent low latency and memory utilization, regardless of the length of the audio being transcribed. Application developers can obtain partial transcripts without worrying about big latency spikes.

In a previous blog post, I discussed how we made the acoustic model streamable. With both systems now capable of streaming, there’s no longer any need for carefully tuned silence detection algorithms in applications. dabinat, a long-term volunteer contributor to the DeepSpeech code base, contributed this feature. Thanks!

In the following diagram, you can see the same audio file being processed in real time by DeepSpeech, before and after the decoder optimizations. The program requests an intermediate transcription roughly every second while the audio is being transcribed. The dotted black line marks when the program has received the final transcription. Then, the distance from the end of the audio signal to the dotted line represents how long a user must wait after they’ve stopped speaking until the final transcript is computed and the application is able to respond. 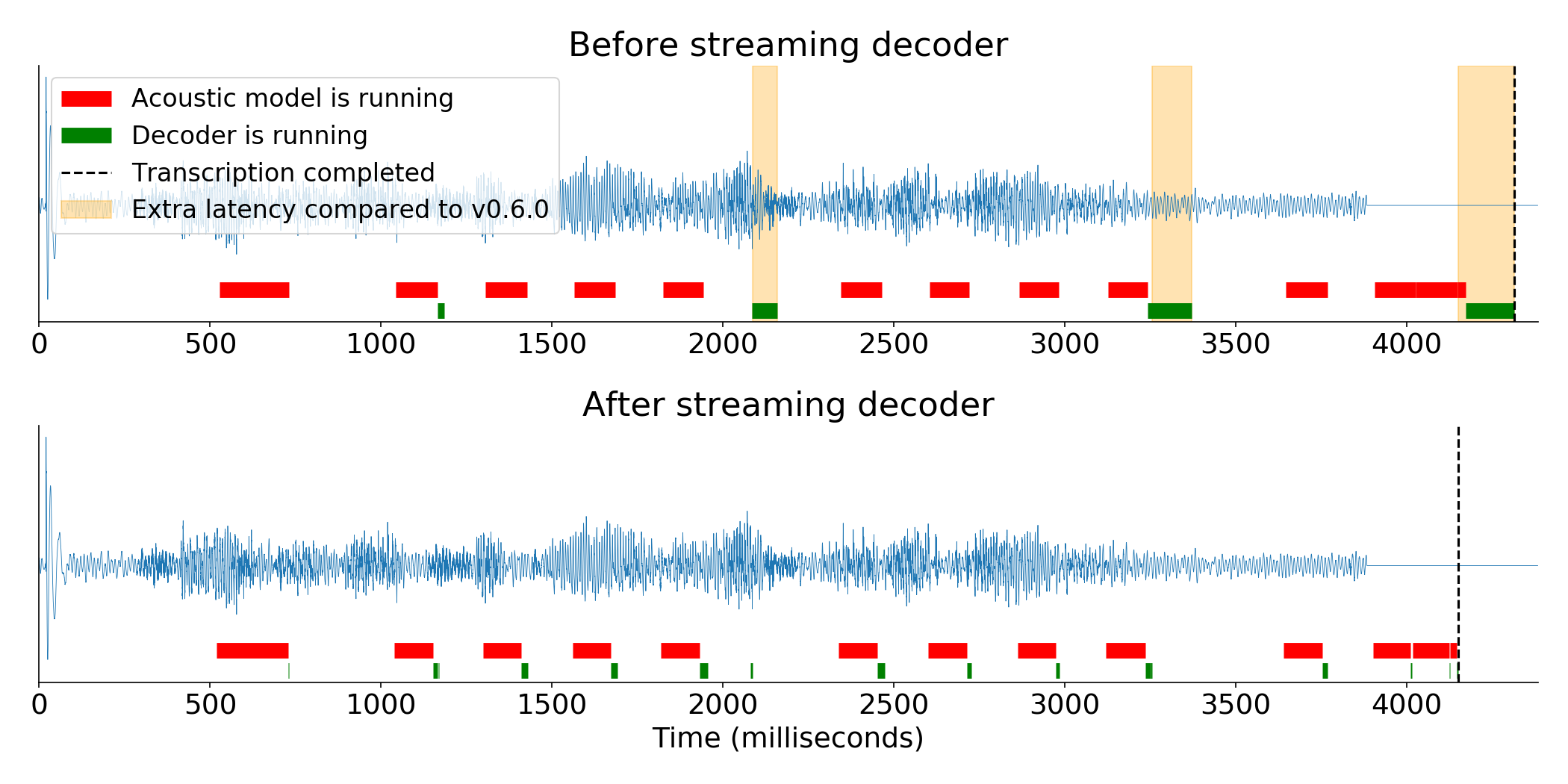 In this case, the latest version of DeepSpeech provides the transcription 260ms after the end of the audio, which is 73% faster than before the streaming decoder was implemented. This difference would be even larger for a longer recording. The intermediate transcript requests at seconds 2 and 3 of the audio file are also returned in a fraction of the time.

Maintaining low latency is crucial for keeping users engaged and satisfied with your application. DeepSpeech enables low-latency speech recognition services regardless of network conditions, as it can run offline, on users’ devices.

We have added support for TensorFlow Lite, a version of TensorFlow that’s optimized for mobile and embedded devices. This has reduced the DeepSpeech package size from 98 MB to 3.7 MB. It has reduced our English model size from 188 MB to 47 MB. We did this via post-training quantization, a technique to compress model weights after training is done. TensorFlow Lite is designed for mobile and embedded devices, but we found that for DeepSpeech it is even faster on desktop platforms. And so, we’ve made it available on Windows, macOS, and Linux as well as Raspberry Pi and Android. DeepSpeech v0.6 with TensorFlow Lite runs faster than real time on a single core of a Raspberry Pi 4.

We now use 22 times less memory and start up over 500 times faster. Together with the optimizations we’ve applied to our language model, a complete DeepSpeech package including the inference code and a trained English model is now more than 50% smaller.

Confidence value and timing metadata in the API

In addition, the new decoder exposes timing and confidence metadata, providing new possibilities for applications. We now offer an extended set of functions in the API, not just the textual transcript. You also get metadata timing information for each character in the transcript, and a per-sentence confidence value.

The example below shows the timing metadata extracted from DeepSpeech from a sample audio file. The per-character timing returned by the API is grouped into word timings. You can see the waveform below. Click the “Play” button to listen to the sample.

Te Hiku Media are using DeepSpeech to develop and deploy the first Te reo Māori automatic speech recognizer. They have been exploring the use of the confidence metadata in our new decoder to build a digital pronunciation helper for Te reo Māori. Recently, they received a $13 million NZD investment from New Zealand’s Strategic Science Investment Fund to build Papa Reo, a multilingual language platform. They are starting with New Zealand English and Te reo Māori.

DeepSpeech v0.6 now offers packages for Windows, with .NET, Python, JavaScript, and C bindings. Windows support was a much-requested feature that was contributed by Carlos Fonseca, who also wrote the .NET bindings and examples. Thanks Carlos!

You can find more details about our Windows support by looking at the WPF example (pictured below). It uses the .NET bindings to create a small UI around DeepSpeech. Our .NET package is available in the NuGet Gallery. You can install it directly from Visual Studio. 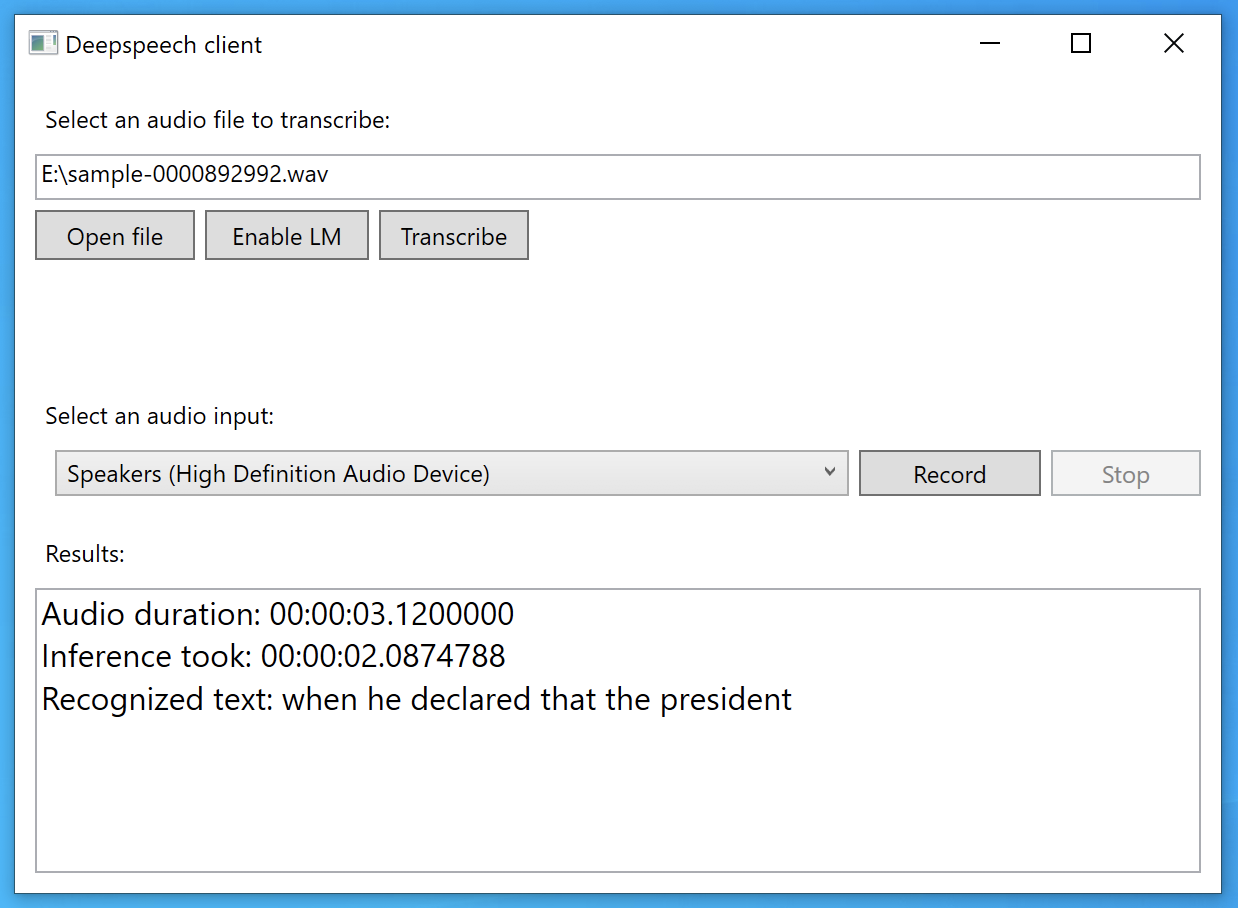 You can see the WPF example that’s available in our repository. It contains code demonstrating transcription from an audio file, and also from a microphone or other audio input device.

With the upgrade to TensorFlow 1.14, we now leverage the CuDNN RNN APIs for our training code. This change gives us around 2x faster training times, which means faster experimentation and better models.

The video above shows a customer using the Iara Health system. By using voice commands and dictation, the user instructs the program to load a template. Then, while looking at results of an MRI scan, they dictate their findings. The user can complete the report without typing. Iara Health has trained their own Brazilian Portuguese models for this specialized use case.

Finally, we have also removed all remaining points where we assumed a known sample rate of 16kHz. DeepSpeech is now fully capable of training and deploying models at different sample rates. For example, you can now more easily train and use DeepSpeech models with telephony data, which is typically recorded at 8kHz.

The DeepSpeech v0.6 release includes our speech recognition engine as well as a trained English model. We provide binaries for six platforms and, as mentioned above, have bindings to various programming languages, including Python, JavaScript, Go, Java, and .NET.

The included English model was trained on 3816 hours of transcribed audio coming from Common Voice English, LibriSpeech, Fisher, Switchboard. The model also includes around 1700 hours of transcribed WAMU (NPR) radio shows. It achieves a 7.5% word error rate on the LibriSpeech test clean benchmark, and is faster than real time on a single core of a Raspberry Pi 4.

DeepSpeech v0.6 includes our best English model yet. However, most of the data used to train it is American English. For this reason, it doesn’t perform as well as it could on other English dialects and accents. A lack of publicly available voice data in other languages and dialects is part of why Common Voice was created. We want to build a future where a speaker of Welsh or Basque or Scottish English has access to speech technology with the same standard of quality as is currently available for speakers of languages with big markets like American English, German, or Mandarin.

Want to participate in Common Voice? You can donate your voice by reading small text fragments. Or validate existing recordings in 40 different languages, with more to come. Currently, Common Voice represents the world’s largest public domain transcribed voice dataset. The dataset consists of nearly 2,400 hours of voice data with 29 languages represented, including English, French, German, Spanish and Mandarin Chinese, but also for example Welsh and Kabyle.

The v0.6 release is now available on GitHub as well as on your favorite package manager. You can download our pre-trained model and start using DeepSpeech in minutes. If you’d like to know more, you can find detailed release notes in the GitHub release; installation and usage explanations in our README. If that doesn’t cover what you’re looking for, you can also use our discussion forum.

Reuben Morais is a Senior Research Engineer working on the Machine Learning team at Mozilla. He is currently focused on bridging the gap between machine learning research and real world applications, bringing privacy preserving speech technologies to users.