A New Way to Support MDN

Starting this week, some visitors may notice something new on the MDN Web Docs site, the comprehensive resource for information about developing on the open web.

We are launching an experiment on MDN Web Docs, seeking direct support from our users in order to accelerate growth of our content and platform. Not only has our user base grown exponentially in the last few years (with corresponding platform maintenance costs), we also have a large list of cool new content, features, and programs we’d like to create that our current funding doesn’t fully cover.

In 2015, on our tenth anniversary (read about MDN’s evolution in the 10-year anniversary post), MDN had four million active monthly users. Now, just three years later, we have 12 million. Our last big platform update was in 2013. By asking for, and hopefully receiving, financial assistance from our users – which will be reinvested directly into MDN – we aim to speed up the modernization of MDN’s platform and offer more of what you love: content, features, and integration with the tools you use every day (like VS Code, Dev Tools, and others), plus better support for the 1,000+ volunteers contributing content, edits, tooling, and coding to MDN each month.

Currently, MDN is wholly funded by Mozilla Corporation, and has been since its inception in 2005. The MDN Product Advisory Board, formed in 2017, provides guidance and advice but not funding. The MDN board will never be pay-to-play, and although member companies may choose to sponsor events or other activities, sponsorship will never be a requirement for participation. This payment experiment was discussed at the last MDN board meeting and received approval from members.

Starting this week, approximately 1% of MDN users, chosen at random, will see a promotional box in the footer of MDN asking them to support MDN through a one-time payment. 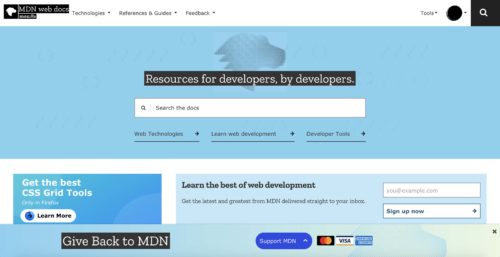 Clicking on the “Support MDN” button will open the banner and allow you to enter payment information.

If you don’t see the promotional banner on MDN, and want to express your support, or read the FAQ’s, you can go directly to the payment page.

Because we want to keep things fully transparent, we’ll report how we spend the money on a monthly basis on MDN, so you can see what your support is paying for. We hope that, through this program, we will create a tighter, healthier loop between our audience (you), our content (written for and by you), and our supporters (also, you, again).

Throughout the next couple months, and into 2019, we plan to roll out additional ways for you to engage with and support MDN. We will never put the existing MDN Web Docs site behind a paywall. We recognize the importance of this resource for the web and the people who work on it.

Kadir Topal is the Product Lead for MDN Web Docs where he works with his team to provide developers with the information they need to build delightful experiences on the open web. He also works with a group of browser vendors and the W3C on the annual Web Developer Needs Assessment. He’s been a long term contributor to Mozilla, having started the German Firefox community in 2002. Kadir lives in the Ruhr area in Germany.