Here’s what happened in July to the code, data, and tools that support MDN Web Docs:

Here’s the plan for August:

We moved MDN Web Docs to a CDN in April 2018, and saw a 16% improvement in page load times. We shipped with 5 minute expiration times for MDN pages, so that the CDN will request a fresh copy after a short time. MDN is a wiki, and we can’t predict when a page will change. 300 seconds was a compromise between some caching for our most popular pages, and how long an author would need to wait for a changed page to be published to all visitors. 80% of visitors are getting an uncached page.

Longer cache expirations would require cache invalidation, one of the two hard things in computer science. Before committing to the work, we wanted to estimate the expected performance benefits. From July 9 to 15, Ryan Johnson bumped the timeout from 5 minutes to 48 hours (PR 4876), and we gathered the performance data.

This is a successful experiment. We got an unexpected result, with minimal work to get those results. At the same time, we’re curious why the longer CDN expiration had little effect for most users, and a negative effect for China. We have some theories.

CloudFront is Amazon’s CDN, and uses the same data centers and networks as MDN’s servers. MDN is optimized for quickly serving wiki pages, so a cache miss adds only 50-100 milliseconds to a request. The primary benefit of the CDN is reducing server load, and we did see a 25% – 50% reduction in requests made to the servers, especially during peak hours.

We’re currently directing CloudFront to cache pages, but telling downstream proxies and browsers not to cache the pages. A wiki page can change after someone edits it, and we wanted to avoid several layers of caches holding on to stale copies. Downstream caches may have a bigger impact than we expect on page load, and we can try allowing caching in the next experiment.

China has country-wide policies to monitor and control internet traffic. We don’t know the details, but longer caching times result in slower processing. We saw an improvement in China moving developer.mozilla.org to CloudFront, lowering the average page load time by 30%. It is possible that most of the benefit was due to removing a second domain lookup for assets. A future experiment may skip CloudFront for traffic from China.

There’s a significant difference between weekday and weekend traffic in some countries, like China and Japan. Our guess is that weekday traffic is dominated by developers using MDN for work, weekend traffic by developers using MDN for hobbies and learning. We also suspect there are differences between the capabilities of work week devices and home devices.

Finally, the results may be a limitation of CloudFront, and we would see different results with a different CDN provider.

We’ll look elsewhere for ways to speed up our page load times. For example, Schalk Neethling is working to replace icons via webfonts with SVG icons (PR 4860), and inlining short JavaScript files rather than making a request (PR 4881). We have further plans for reducing page load time, to meet our new performance goals.

Ryan Johnson removed zones on July 24, merging PR 4853. From a user’s perspective, there are a few changes.

Custom zone styling is removed, and zone pages now look like other wiki pages. This is subtle on most pages, such as removing an icon next to the title. Other pages required a re-write, such as The History of MDN. 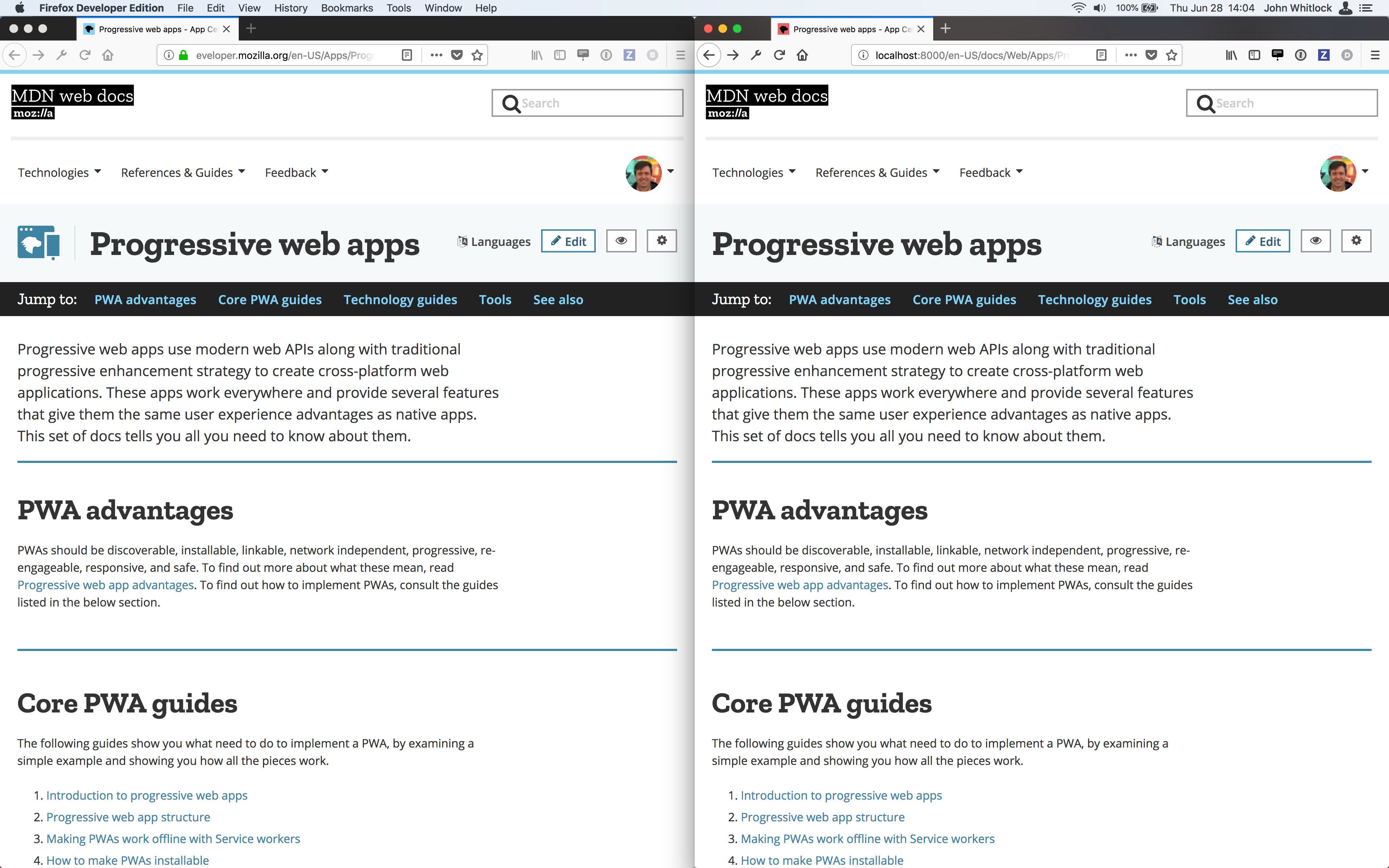 Zone sidebars were converted to KumaScript sidebars, and added to each page in the zone, through the heroic efforts of wbamberg (PR 711 and a few others).

About 2600 lines of code were removed, about 10% of the codebase. The wiki code is now simpler, less error prone, and safer to update.

In July of last year, the Browser Compatibility Data (BCD) project hit the milestone of over 1000 MDN pages using the new compatibility data, with about 4900 to convert. This month, there are less than 850 pages left to convert, and over 5000 MDN pages are using the new data. The steady work of the BCD team has made a huge impact on MDN and the community.

Visual Studio Code improved the accuracy of their data by adopting the BCD project in the June 2018 release. This was proposed by Pine in vscode-css-languageservice issue #102 and implemented in PR #105, with feedback from BCD and mdn/data contributor Connor Shea. 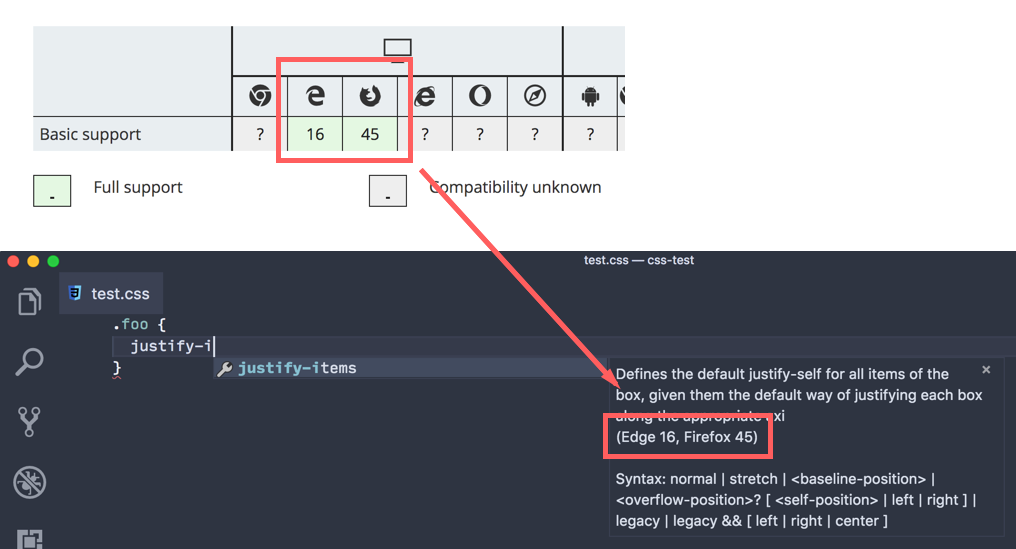 Data from BCD in VS Code as seen in Visual Studio Code.

Florian Scholz went on vacation, and Daniel D. Beck took the lead on project maintenance, including shipping the npm package, now documented via PR 2480. Most of the PRs from the Paris Hack on MDN event are now merged or closed, and the project is down to 120 open PRs, representing about half of the remaining conversion work.

There were 307 PRs merged in July:

58 of these were from first-time contributors:

Elasticsearch powers our little-loved site search, and we’re using version 2.4 in production. This version went out of support in February 2018, but our provider gave us until August to update. We used that grace period to update from Django 1.8 to 1.11. In August, we’ll update our client libraries and code so we can update to Elasticsearch 5.6, the next major release. We don’t expect many user-visible changes with the new server, but we also don’t plan to lose site search due to missing the deadline.