Editor’s note: A changelog is “a log or record of all notable changes made to a project. [It] usually includes records of changes such as bug fixes, new features, etc.”

Publishing a changelog is kind of a tradition in open source, and a long-time practice on the web. We thought readers of Hacks and folks who use and contribute to MDN Web Docs would be interested in learning more about the work of the MDN engineering team, and the impact they have in a given month. We’ll also introduce code contribution opportunities, interesting projects, and new ways to participate.

Here’s what happened in March to the code, data, and tools that support MDN Web Docs:

Here’s the plan for April:

Improved compatibility data at the Hack on MDN event

In March, the MDN team focused on the Browser Compatibility Data project, meeting in Paris with dozens of collaborators for the “Hack on MDN” event. The work resulted in 221 Pull Requests in the BCD repo, as well as additional work in other repos. See Jean-Yves Perrier’s Hack on MDN article for details about the tools created and data updated during the week.

We reviewed and merged over 250 PRs in March. The compatibility data conversion jumped from 57% to 63% complete. Jeremie Patonnier led the effort to convert SVG data (BCD PR 1371). API data was also a focus, both converting the existing MDN tables and using other data sources to fill out missing APIs.

There’s now 264 open PRs in the BCD repo, about a month’s worth, and the contributions keep coming in. BCD is one of the most active GitHub repositories at Mozilla this year by pull requests (880) and by authors (95), only second to rust (1268 PRs, 267 authors). The rate of contributions continue to increase, so BCD may be #1 for Q2 2018.

Brotli is a Google-developed compression algorithm designed for serving web assets, which can outperform the widely used gzip algorithm. By the end of 2017, all major browsers support the br content-encoding method, and Florian requested a test of brotli on MDN in bug 1412891. Maton Anthony wrote a Python-2 compatible brotli middleware in PR 4686, with the default compression level of 11. This went live on March 7th.

However, brotli was a net-negative for MDN performance. Average response time measured at the server was slower, going from 75 ms to 120 ms, due to the increased load of the middleware. Google Analytics showed a 6% improvement in page download time (1 ms better), but a 23% decline in average server response time (100 ms worse). We saw no benefit in static assets, because CloudFront handles gzip compression and ignores brotli.

Antony adjusted to compression level 5 (Kuma PR 4712), which a State of Brotli article tested to be comparable to gzip 9 in compression time but still results in smaller assets. When this went live on March 26th, we saw similar results, with our response time returning to pre-brotli levels, but with a slight improvement in HTML size when br was used.

When we ship CloudFront in April, the CDN will take care of compression, and brotli will go away again. It looks like a promising technology, but requires a CDN that supports it, and works best with a “pre-compress” workflow rather than a “when requested” middleware workflow, which means it won’t be a good fit for MDN for a while.

There were 370 PRs merged in March:

137 of these were from first-time contributors:

We’ll be busy in April with the output of the Hack on MDN event, reviewing PRs and turning prototypes into production code. We’ll continue working on our other projects as well.

The interactive examples team will firm up the code and processes, to build a better foundation for contributors and for future support. At the same time, they will firm up the design for HTML examples, which often require a mix of CSS and HTML to illustrate usage.

Ryan Johnson finished up caching headers for the 60 or so MDN endpoints, and he and Dave Parfitt added CloudFront in front of the staging site. We’ll spend some time with automated and manual testing, and then reconfigure production to also be behind a CDN.

We’ve missed the April 1 deadline for the Django 1.11 update. We plan to focus on the minimum tasks needed to update in April, and will defer other tasks, like updating out-of-date but compatible 3rd-party libraries, until later.

Schalk Neethling has had some time to get familiar with the front-end code of MDN, using tools like Sonarwhal and Chrome devtools’ performance and network panels to find performance issues faced by Chrome visitors to MDN. He’s put together a list of changes that he think will improve development and performance. 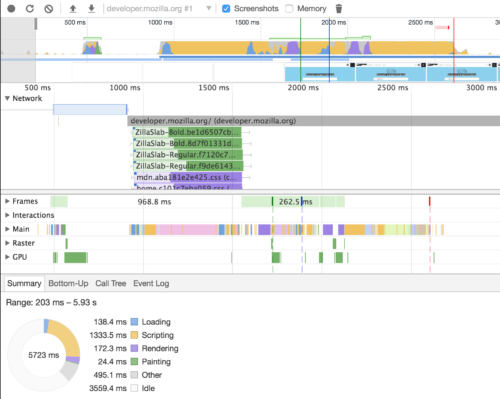 One quick win is to replace FontAwesome’s custom font face with SVG icons. Instead of loading all the icons in a single file, only the icons used by a page will be loaded. The SVG will be included in the HTML, avoiding additional HTTP requests. SVG icons are automatically scaled, so they will look good on all devices. This should also improve the development experience. It’s easy to make mistakes when using character encodings like "\f108\0020\eae6", and much clearer to use names like "icon-ie icon-mobile".

Schalk is thinking about other challenges to front-end development, and how to bring in current tools and techniques. He’s cleaning up code to make it more consistent, and formalizing the rules in MDN Fiori, a front-end style guide and pattern library. This may be the first step to switching to a UI component structure, such as React.

A bigger improvement would be updating the front-end build pipeline. MDN’s build system was developed years ago (by Python developers) when JavaScript was less mature, and the system hasn’t kept up. Webpack is widely used to bundle code and assets for deployment, and a new pipeline could allow developers to use a broader ecosystem of tools like Babel to write modern JavaScript.

Finally, we continue to look for the right way to test JavaScript. We’re currently using Selenium to automate testing in a browser environment. We’ve had issues getting a stable set of tools for consistent Selenium testing, and it has proven to be too heavy for unit testing of JavaScript. Schalk has had good experiences with Jest, and wants to start testing MDN Javascript with Jest in April.