Editor’s Note: This post is also featured on the 2017 Performance Calendar.

This is a story about an engineering team at Mozilla, based in Taipei, that was tasked with measuring performance and solving some specific performance bottlenecks in Firefox. It is also a story about user-reported performance issues that were turned into actionable insights. It is the story of how we developed Hasal, a framework for testing web performance between different browsers. Hasal takes a new approach to testing that considers user perception in the process.

Back in 2016, Firefox performance was problematic. We had many issues to address. One of the critical issues had to do with user reports about performance problems of Firefox on office web applications — regarding slow page-loads as well as sluggish response times.

Taking these seriously, but also experiencing many of these issues during our daily work, identifying the root cause for these performance issues was a top priority for us. Unfortunately, user sentiments is very often unspecific which makes identifying specific problems and evaluating their impact hard. So, we decided to take a new approach.

We were trying to implement a framework without using WebDriver, which relies on specialized browser APIs and JavaScript injection to manipulate the browser. Instead we used Sikuli, which submits native-like I/O signals to the computer to simulate user action. We built a framework that lets you define precise user interactions on a web application and measure input latency time using image recognition and real-time measurement instead of DOM events.

After working hard for about a year, we successfully implemented Hasal to compare the Actual Input Latency between different browsers on various web applications.

What is Actual Input Latency?

Based on Google’s “Measurement Performance with the RAIL Mode”, actual input latency is one of the key metrics that extends measurements of web performance beyond page load and focuses on responsiveness and in-app navigation.

In typical web applications, browsers spend most of their time on waiting for network resources to be downloaded and running JavaScript. The goal of the Hasal implementation was to focus on the latter, meaning that we measure the time elapsed between an I/O event and the web application’s first response as perceived by a user. Therefore, we measure only the time from user input to the screen’s initial change. We define this measure of time as the actual input latency.

Our goal was to implement a tool built from the perspective of user perception. We designed our workflow so that each and every simulated user step would be based on image recognition, and every numeric measurement would be based on visual analysis.

Our framework is based on the PyUnit framework in combination with Sikuli. You can see our workflow in the figure above. First, we have some prerequisite tasks in the setup() function. Next, it executes the simulated user steps in the run() function of a designated test. Last, we get the final output from teardown() function.

Each simulated user interaction is screen-captured for analysis. Hasal relies on video recording and image extraction to get the desired results. The details of how we do this will be explained in the next few paragraphs.

When entering the run() function, we send a simulated I/O event to specific icons, images, or areas of the screen through the JVM (Java Virtual Machine). This way, we simulate how people interact with the web application. Also, we send the event log to the terminal at the same time via JVM. This is considered a marker to identify when the I/O event triggered. 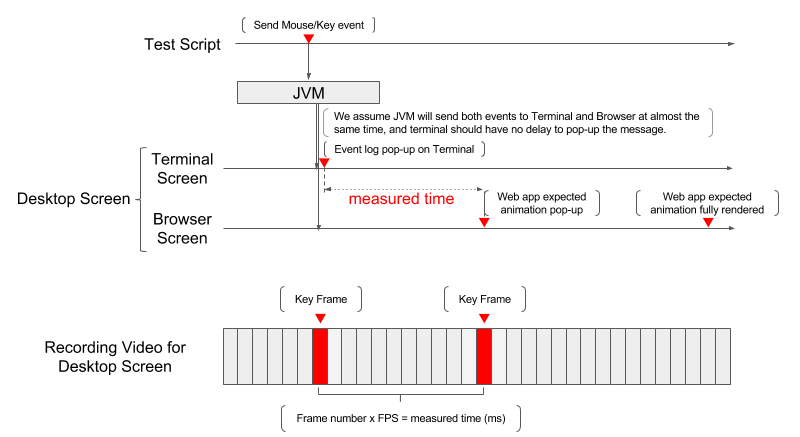 In the teardown() function, Hasal finishes desktop video recording and starts to analyze the video. The basic idea of getting the measured time is to calculate the actual frames played during two key frames. The first key frame is marked when the indication shows up in terminal, and we assume that there is a very little time delay between indication shown in terminal and submission of I/O event. The second key frame is the first screen change in a certain area of the browser. In other words, the second key frame is the indicator of web application’s response in the first place.

By calculating the actual frame number between the first key frame and second key frame, we can get the real response time of web application’s response to user action. For example, if we were recording in 90fps (frames per second), and we have 10 frames between 2 key frames as shown above, we will get an Actual Input Latency of 111.11 ms.

An Example of Actual Input Latency

To better illustrate the idea of how to get from a defined user interaction on a web application to Actual Input Latency measurements with Hasal, here is a small example from one of our test cases from our “social” category (as described in a previous post about performance testing).

In one testing scenario that looks at latency for opening an online chat, we measure the Actual Input Latency from the initial click to when the chat screen shows up. Here are the testing steps. These steps are the ones that are translated into the linked script:

The user wants to open a chat window on Facebook. Therefore, they select a friend from their list and click on the respective friend to launch the window and wait for it to load.

The result of input latency will based on the Snapshot 1, 2 and the frames converted from video to come out the actual frames played.

More details on how each web application was tested can be found in the repository.

We have dedicated the Hasal framework to measure and improve Firefox Quantum performance. Over time, we have seen great improvements on Actual Input Latency for different web applications. In the above figures, we can see that Firefox Quantum’s response time has improved by up to 6x. Based on Hasal results, we have filed more than 200 bugs of which more than 80% were fixed for our Firefox Quantum release.

Limitations of the Hasal framework

The work on Hasal has been a constant iterative approach of implementation and testing. During the whole time of its development, we worked closely with other engineering teams at Mozilla to make Hasal as useful as possible. However, some limitations still exist which are important to keep in mind:

Measured time is limited by FPS

Since our measurement is based on captured frames, any action within one frame can’t be measured by this framework. In our laboratory environment where we record with 90fps, this threshold is at 11.11ms and any response faster than 11.11ms cannot be detected.

Overhead can vary in different browsers

Since the framework heavily relies on capturing desktop video, there is potential overhead introduced. We have tried to choose a recorder with little overhead that records from hardware directly. However, this approach could introduce different overhead in the different browsers due to different implementations for leveraging graphics card computation power.

As the Hasal approach also relies heavily on the assumption that sending an indicator to the terminal should only have a very short delay compared to sending I/O events to the browser, we have done a lot of profiling to ensure that this assumption is correct. According to our profiling results, we are almost certain. However, we still found that different JVM version could break our assumption in certain environments. Sometimes, a newer JVM version can increase the time delay between sending the indicator to the terminal and sending the I/O events. We actually found that upgrading Java introduced a delay of 20ms.

While the current Hasal implementation has proven useful to guide engineering work on fixing critical performance issues, there are some open issues that we will need to target next to make Hasal useful as a general framework for testing performance.

This framework is a combination of many tools. So, it requires a time-consuming installation script to deploy the framework. That also raises the barrier to use, due to the difficulty of installing and reproducing our test results in other environments. Therefore, trying to make it simple and easier to install in others’ environment will be our next step in the future.

The overall concept of our framework should apply in mobile devices as well. However, we might need to change few things before we can proceed. First of all, the video recorder might need to be replaced by snapshot or screen capture software to minimize the CPU power consumption and improve the efficiency. Also, the host connected to the mobile device should be responsible for calculating the results.

We already talked about the issue of potentially introducing non-negligibleoverhead in some scenarios by relying on a software desktop video recorder. So, we’ve also considered having an alternative solution to record the whole desktop screen. For example, an external HDMI recorder or external high-speed camera would be a potential choice for us to further investigate.

When you find a scenario with a significant performance issue, typically you file a bug for it. However, a bug does not provide the detailed information during testing such as detailed profiler data needed to take the next action. That’s missing in our current framework. It’s not easy to figure out a way to combine the actual visual representation with the code stack. But we are trying to integrate them via indicators and markers in profiles. This could help us understand two different things in the same timeline and let engineers understand more about the situation.

Let us know what you think. Thanks!

I have been working in software development for 13 years, with the last 9 years focusing on performance measurement, test automation, test consultant, and Scrum Process. Recently, I am specifically interested in the Performance Measurement and has solid experience in developing a performance measurement framework from scratch. I'm always focused on making the testing for entire product efficient and quality driven, regardless of the role I have managed.

I am currently working for Mozilla in Taiwan. I am a software engineer. I like to travel to different places.