By Dietrich Ayala
Posted on September 21, 2017 in Featured Article and Web APIs

I’ve been building extensions for Firefox since 2005. I’ve integrated bookmark services (which got me a job at Mozilla!), fixed the default theme, enhanced the developer tools, tweaked Github, optimized performance, eased tagging, bookmarked all Etherpads, fixed Pocket and many other terrible wonderful things.

I’ve written XUL extensions, Jetpacks, Jetpacks (second kind), SDK add-ons and worked on the core of most of those as well. And now I’ve seen it all: Firefox has the WebExtensions API, a new extension format designed with a goal of browser extensibility without sacrificing performance and security.

In Firefox 57, the WebExtensions API will be the only supported extension format. So it’s time to move on. I can no longer frolic in the luxury of the insecure performance footgun APIs that the legacy extension formats allowed. It’s time to migrate the extensions I really just can’t live without.

I started with Always Right, one of the most important extensions for my daily browser use. I recorded this migration, complete with hiccups, missteps and compromises. Hopefully this will help you in your extension migration odyssey!

Always Right is a simple Firefox extension which opens all new tabs immediately to the right of the current tab, regardless of how the tab is opened.

This is great for a couple of reasons:

Conceptually, Always Right is a simple extension but ultimately required a complete rewrite in order to migrate to the new WebExtensions API format. The majority of the rewrite was painless and fast, but as is our bane as developers, the last few bits took the most time and were terribly frustrating.

The overall concept hasn’t changed: An extension built with the new APIs is still a zip file containing a manifest and all your code and asset files, just like every other extension format before it.

The major pieces of migration are:

The first step is to migrate your manifest file, beginning by renaming package.json to manifest.json.

Here’s an image that shows the differences between the old file and the new file: 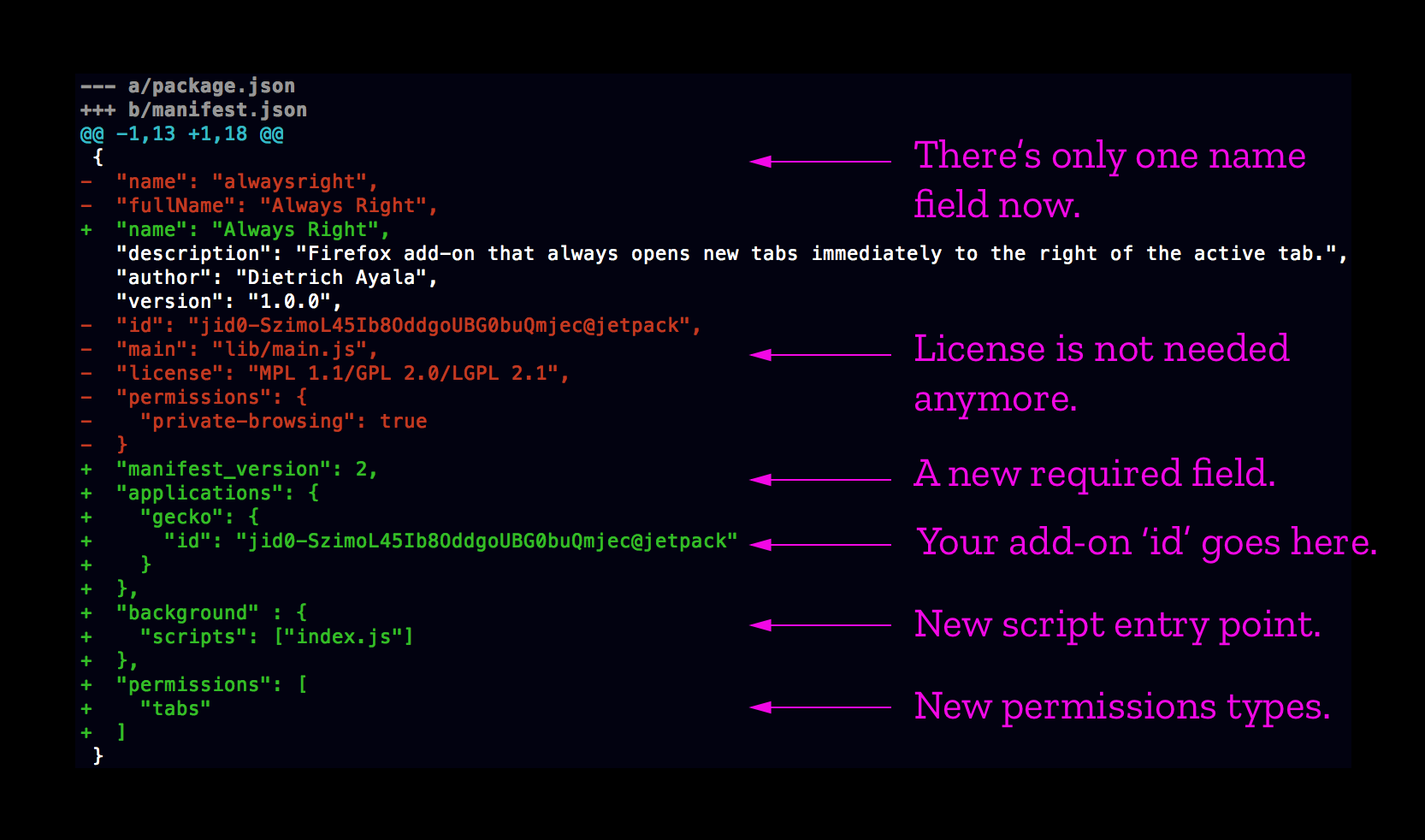 The most important change is to add the property manifest_version and give it a value of 2. With the manifest_version, name and version fields in place, you now have all the required properties for a valid extension. Everything else is optional.

However, since you’re updating an extension that already exists, you need to do a couple of other things.

There are more optional fields not covered here. Read about the other fields in the new manifest.json docs, and for reference here are the old package.json docs.

The flow of Always Right is that it listens to an event that specifies that a new tab has been opened, and then modifies the index of that tab such that it is immediately to the right of the currently active tab.

I first moved my /lib/main.js file to /index.js and specified it as a background script in the manifest.json file as noted above.

A more interesting conversion was how to get access to the currently active tab.

In the SDK, you could simply access window.tabs.activeTab, but in the new world of extensions you’ll need to do this:

Those were the main changes. Application logic and code flow stayed pretty much the same as before. However, since it’s a new API with different behaviors, a few things came up. I had to make the following adjustments:

I also had to ship with some behavior that’s less than ideal and not fixable yet:

The new, improved developer workflow for testing in an existing profile is entirely different from the Firefox SDK.

To install your add-on for testing, open a new tab navigate to about:debugging (see screenshot below). Click the Load Temporary Add-on button and select any file from your extension’s source directory. Your extension will be installed! 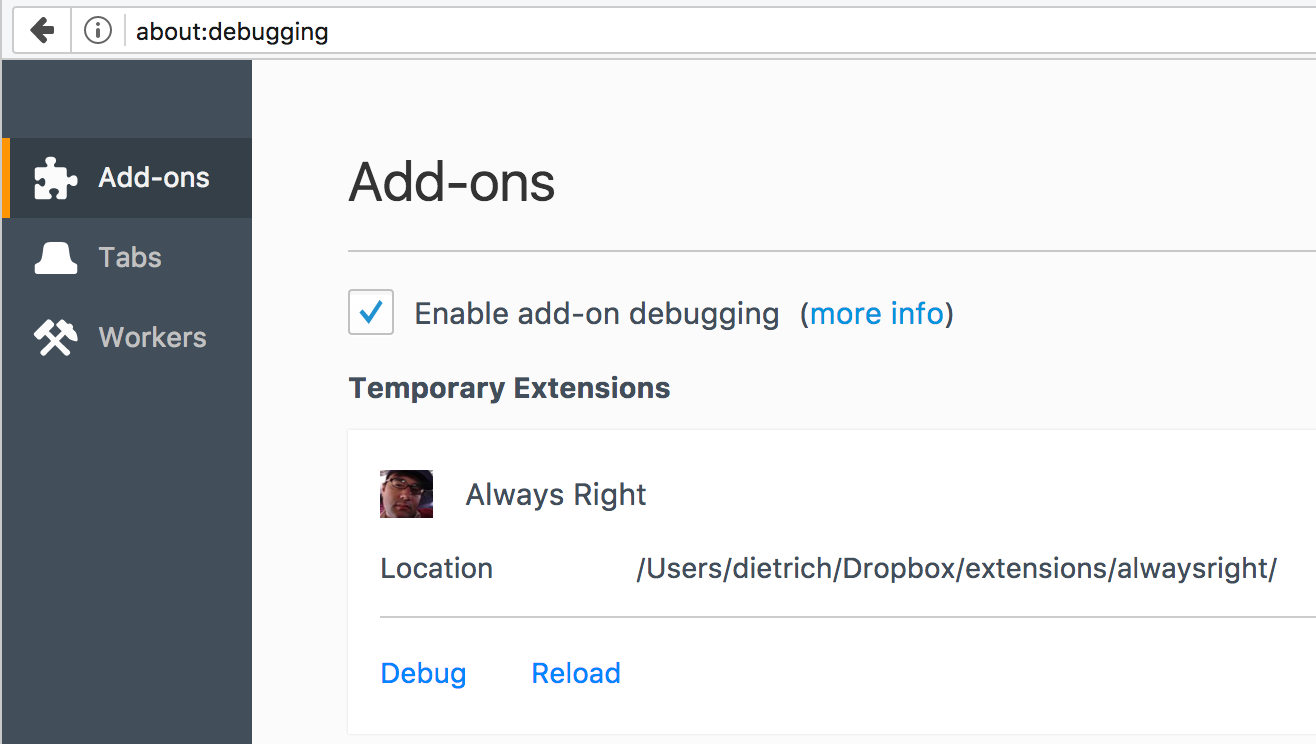 But what if you see an error there? What if the functionality is not working as expected? You can debug your extension using the Browser Toolbox. Read here how to configure and open the toolbox.

Later in the development process I found the web-ext CLI which is great. Use web-ext run like you would cfx/jpm. It opens in a temporary profile.

Once my changes were finished and tested, I relied on my new-found friend web-ext and bundled a zip file with web-ext build. The zip file is found in the web-ext-artifacts subdirectory, named with the new version number. I uploaded the file the same as always on addons.mozilla.org, and the extension passed validation. I waited less than a day and my extension was reviewed and live!

VICTORY! Well, not total victory: Immediately the bugs came in. In a spectacular display of generous hearts, my users reported the bugs by giving the add-on 5 star reviews and commenting about the new version being broken. 😅

I’ve fixed most of the reported issues, so my users and I can now ride happily off into the sunset together.

Looking for help? There’s detailed documentation on migrating your add-ons on MDN, check out the legacy extension porting page.

You can see the source code to this add-on in the Always Right repo on Github. If you see any more bugs, let me know!

And if you’d like to try the extension out, you can install Always Right from addons.mozilla.org.

The bugs I filed while migrating this extension: