With CSS Grid shipping across browsers this spring (already in Firefox 52, Chrome 57, and Safari 10.1. UPDATED: Safari 10.1 shipped in March with the release of iOS 10.3 and macOS Sierra 10.12.4) the team here at Mozilla wanted to show off some of the key features and also let our in-house designers and developers experiment with the technology on mozilla.org. The result is a live demo site that shows CSS Grid features and provides links to our favorite resources. The bonus is the mozilla.org web developers got hands-on, real world experience by working up a site from scratch with Grid. 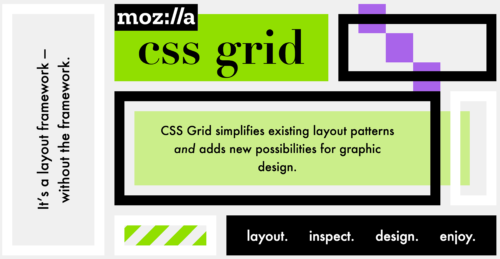 It turned out that the resources available on the web, including tons of examples and instruction, do such a great job of clearly explaining the basics that they were able to dive in and build the site without any handholding. Jen Simmons and  Rachel Andrew both provide excellent examples and tutorials on how to start working with grids. In addition, MDN contains several detailed guides on using CSS Grids.

When designing this project we had the following goals in mind:

Grid provides powerful layout capabilities, and on the demo site we wanted to illustrate some of the key features. This list is not exhaustive, but does show some really interesting capabilities that are now available.

Additionally, we wanted to show off Firefox’s Grid Inspector Tool, which lets you see the grid lines in the browser while you’re creating a layout or studying other examples of CSS Grid in action.

Please check out the demo site and let us know what you think. We hope it will help you to learn and inspire you to start using CSS Grid. And stay tuned for more coverage of CSS Grid and how to use it, here and on MDN.