By Dan Callahan
Posted on October 12, 2015 in Add-ons, Featured Article, and Web APIs

After reading last month’s “Let’s Write a Web Extension,” I was inspired to try and port a real-world add-on to a WebExtension. Specifically, I tried to port the Chrome version of the popular, open-source “Reddit Enhancement Suite” (RES) to Firefox. Here’s what I learned, and what you can do today to prepare your own add-ons for the transition.

Note: The authors of RES are excited about WebExtensions and plan to officially port their add-on, but this is not that. If you want to use RES, you should install the supported version from AMO.

First, I want to stress that WebExtensions are a long-term, multi-year project. Our first releases will be focused on building a foundation of basic, well-supported, cross-browser APIs. This means that it may take a while before we’re ready to support complex add-ons that rely on unique browser features, but we’ll get there eventually.

Because everything here is still very early and experimental, you’ll need to use a Nightly build of Firefox if you want to follow along. This is a sneak peek, not something you should plan on deploying.

That said, if you have a Chrome extension or a cross-browser add-on, now is a great time to experiment with WebExtensions and provide feedback. Your input will be crucial in helping Mozilla figure out which APIs to prioritize and initially support.

You must explicitly mark your add-on as compatible with Firefox by adding an applications key to your manifest.json. It looks like this:

Set "YOUR_ADDON_ID" to a made-up string formatted like "ext@example.org". If you plan on directly upgrading your users from an existing Firefox add-on to a WebExtension version of the same, you should re-use the value found in the "id" field of your package.json.

The next step is to compare the keys in your manifest.json to the ones that Firefox supports. Unsupported keys are ignored, so you can leave them in your manifest until we get around to implementing them, at which point they should Just Work.

Looking at Reddit Enhancement Suite’s manifest, we’re in pretty good shape. The metadata attributes are all implemented, and there’s sufficient support for background, content_scripts, and web_accessible_resources to work with RES.

Let’s look at what’s missing, and what impact it has:

At this point, I’m feeling pretty good about our prospects. Most of the APIs we need are supported, and we should be able to deliver most of RES’s functionality despite the handful of missing APIs.

Since we’ve identified some gaps in Firefox’s API coverage relative to our needs, it’s time to head to Bugzilla. Filing and voting for bugs are two of the most important contributions you can make as an add-on developer. In addition to keeping you informed of progress, it helps us judge which APIs are the most important to implement.

Note: Bugzilla has a somewhat esoteric search syntax. To look for all open and closed WebExtension bugs that mentioned the history API, try searching for ALL Component:WebExtensions #history, which should turn up Bug 1208334: “Implement history API for open extension API.”

Since I’m writing this article, I’ve gone ahead and made sure bugs were filed for the above APIs. Feel free to CC yourself on these bugs if you want to be notified of their progress, or click the little “vote” link next to the “Importance” field if the bug is particularly important to you.

In addition to manifest properties, we also need to ensure that Firefox actually supports the APIs we need. We’ve set up a visual dashboard of API progress at AreWeWebExtensionsYet.com, but for specifics you have to go to MDN. Since Chrome’s extension APIs are exposed as properties on a global chrome object, we can run grep to find out what we use:

Of the APIs that RES depends on, only a few are unimplemented:

Before diving into the code, let’s head back to Bugzilla and make sure bugs have been filed for these. The bugs mentioned above cover History, Page Actions, and Permissions, but they don’t cover tabs.getCurrent. I’ve filed Bug 1212890 for that.

Now that we’ve identified our limitations, we need to work around them. In the short term, we can just insert guards that check for the existence of an API before calling methods on it. For example, let’s look at how history.addUrl is used in background.js:

As long as chrome.history.addUrl is undefined, this will throw an error. Instead, let’s check for its existence before we use it:

This keeps the script from blowing up, but it means that addURLToHistory will silently fail until Bug 1208334 gets resolved. Under certain circumstances, like with RES, this might be acceptable. If it’s not, you’ll need to find a creative workaround or wait for the relevant bug to get resolved. Remember: file and vote on bugs! It’s how we know what we need to work on.

Page actions are another great example: while it’s handy to have a button in the browser’s UI, you may also be able to provide the same functionality by using content scripts to inject custom UI into target pages until Bug 1197422 is fixed.

Lastly, we could get around the lack of permissions.request() by moving all of the optional_permissions from our manifest.json up into the normal permissions block. That would work, but it’s best not to require more permission than you need, and changing the permissions stanza generally results in your users being prompted to re-authorize your add-on. If possible, just wait for Bug 1197420.

If anything goes wrong, check out the packaging and installation docs on MDN for troubleshooting tips.

Despite WebExtensions being a brand new initiative at Mozilla, we’ve already implemented most of the building blocks needed to support the Reddit Enhancement Suite. Things should work, as long as we’ve properly routed around unsupported API calls. 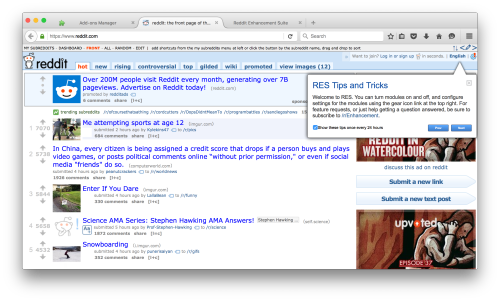 Hey! That looks good! Maybe it’s working? Let’s try the feature that loads more content when you scroll to the bottom of a page…

To find out what failed, we need to open up the Browser Console. It’s a global log of everything that happens in the browser, and it’s where uncaught exceptions from WebExtensions show up. It’s in the Developer menu.

Note: Though they are related, the Browser Console is not the same thing as the Web Console in that menu.

Looking at the Browser Console, there’s an uncaught exception: “TypeError: window.Favico is not a constructor.” 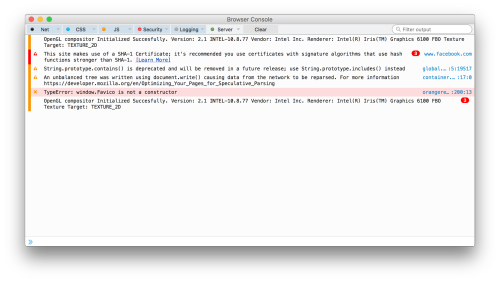 This happens when orangered.js calls:

The root cause of the bug is that the Favico library exports itself as this.Favico in its content script, and RES assumes that it will then be available as window.Favico in other scripts. It turns out that Firefox doesn’t work the same way. Off to Bugzilla to file Bug 1208775!

This gets us past that error and results in working infinite scrolling. Hooray! Also, kudos to RES for fixing this in pull request #2465!

Of course, we’re not done yet. There are many other fascinating and hilarious bugs to be found, like Bug 1208874, which prevents RES from saving any of your settings because WebExtension localStorage is getting nuked every time the browser restarts. Boo!

Remember: Keep your Browser Console open and file bugs when you find them!

As I mentioned at the beginning of the article, WebExtensions are still very early in their development, and things are rapidly changing. For example, PageAction support should land any day now. That said, WebExtensions are already astonishingly capable. For add-ons like RES that isolate and minimize browser-specific code, a port to WebExtensions is surprisingly close to being viable on Nightly builds of Firefox.

We’re still several months out from any of this landing in mainline Firefox, but it’s encouraging to see rapid progress. Each day we’re closer to a future in which a single add-on codebase can be fully re-used across many browsers, and where add-ons are written using the same technology as the Web itself.

If you want to follow along with the bugs that are blocking a port of RES to WebExtensions, CC yourself on the RES metabug at Bug 1208765 and check out my own attempt at porting RES on GitHub.

Lastly, consider contributing to Firefox! Everything we do is open source, and most WebExtension APIs are implemented in JavaScript. If you can hack JS, you can make a difference. Check out the open WebExtension bugs and drop by the #webextensions channel on irc.mozilla.org to get started.

Finally, a quick word of thanks to Steve Sobel, creator of the Reddit Enhancement Suite, who would like me to remind you that any port of RES to WebExtensions is unfinished, unofficial, and unsupported until he personally tells you otherwise. Don’t bug him about our bugs. ;-)