The Visibility Monitor supported by Gaia

With the booming ultra-low-price device demands, we have to more carefully calculate about each resource of the device, such as CPU, RAM, and Flash. Here I want to introduce the Visibility Monitor which has existed for a long time in Gaia.

For your information, the Visibility Monitor was done by JavaScript master David Flanagan. He is also the author of JavaScript: The Definitive Guide and works at Mozilla.

Basically, the Visibility Monitor removes the images that are outside of the visible screen from the DOM tree, so Gecko has the chance to release the image memory which is temporarily used by the image loader/decoder.

You may ask: “The operation can be done on Gecko. Why do this on Gaia?” In fact, Gecko enables the Visibility Monitor by default; however, the Visibility Monitor only removes the images which are image buffers (the uncompressed ones by the image decoder). However, the original images are still temporarily stored in the memory. These images were captured by the image loader from the Internet or the local file system. However, the Visibility Monitor supported by Gaia will completely remove images from the DOM tree, even the original ones which are temporarily stored in the image loader as well. This feature is extremely important for the Tarako, the codename of the Firefox OS low-end device project, which only equips 128MB memory. 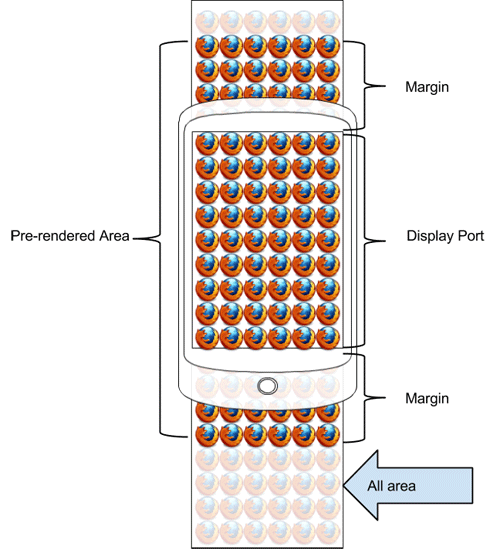 To take the graphic above as the example, we can separate the whole image as:

Because of this working principle, we can adjust the parameters and image quality to match our demands.

The monitored HTML DOM Elements are arranged from top to bottom

The Visibility Monitor calculates the height of each HTML DOM Elements to decide whether to display the element or not. So, when the element is fixed at a certain location, the calculation becomes more complex, which is unacceptable. When someone uses this kind of arrangement, the Visibility Monitor shows nothing at the area where it should display images and sends error message.

Similar to absolute location, dynamically changing HTML DOM Elements’ locations make calculations more complex, both of them are unacceptable. When someone uses this kind of arrangement, the Visibility Monitor shows nothing at the area.

The monitored HTML DOM Elements cannot be resized or be hidden, but they can have different sizes

The container which runs monitoring cannot use position: static

Because the Visibility Monitor uses offsetTop to calculate the location of display port, it cannot use position: static. We recommend to use position: relative instead.

The Visibility Monitor uses the window.onresize event to decide whether to re-calculate the pre-rendered area or not. So each change of the size should send a resize event.

The Visibility Monitor API is very simple and has only one function:

The parameters it accepts are defined as follows:

One of my tasks is to the add the Visibility Monitor into the 1.3T Music app. Because lack of understanding for the structure of the Music app, I asked help from another colleague to find where I should add it in, which were in three locations:

Here we only take TilesView as the example and demonstrate the way of adding it. First, we use the App Manager to find out the real HTML DOM Element in TilesView for scrolling:

With the App Manager, we find that TilesView has views-tile, views-tiles-search, views-tiles-anchor, and li.tile (which is under all three of them). After the test, we can see that the scroll bar shows at views-tile; views-tiles-search will then automatically be scrolled to the invisible location. Then each tile exists in the way of li.tile. Therefore, we should set the container as views-tiles and set tag as li. The following code was used to call the Visibility Monitor:

In the code above, visibilityMargin is set as 360, which means 3/4 of the screen. minimumScrollDelta is set as 1, which means each pixel will be recalculated once. thumbnailOnScreen and thumbnailOffscreen can be used to set the background image of the thumbnail or clean it up.

We performed practical tests on the Tarako device. We launched the Music app and made it load nearly 200 MP3 files with cover images, which were totally about 900MB. Without the Visibility Monitor, the memory usage of the Music app for images were as follows:

With the Visibility Monitor, we re-gained the memory usage as follows:

To compare both of them:

To make sure the Visibility Monitor works properly, we added more MP3 files which reached about 400 files in total. At the same time, the usage of memory maintained around 7MB. It’s really a great progress for the 128MB device.

The margin and delta parameters of the Visibility Monitor will affect the FPS and memory usage, which can be concluded as follows:

John Hu is a front-end engineer from Mozilla Taipei office and based in Taiwan. Hu is a peer of video app and mainly focuses on the Gaia of Firefox OS. Currently, he joined the emerging device team who tries to bring the Firefox OS into unknown world. John Hu has about 10 years experiences on software development, including web services, window applications, and embedded softwares. One of his app published globally is miidio recorder which is a well designed Android MP3 recorder. He is interested in learning new things, like Raspberry Pi, 3D printer and welcome to contact him.