When you start developing for Firefox OS you might be underwhelmed by the tools that are provided. There is no standard UI toolkit, or a JavaScript framework that all apps build on. This is not a situation that’s inherently bad because in essence Firefox OS is the web; and thus gives you complete freedom in the toolchain you use. This gives us the advantage to use any new technology that pops up also on Firefox OS. The downside is that you’ll miss out on things you might be used to on Android or iOS, like built-in templates; view transitions and UI components.

In Telenor Digital we decided to build a ready-to-go application framework that deals with these shortcomings, built on top of AngularJS, the MVW framework by Google. The template is the result of iterating over our internal applications that we built for Firefox OS, and addresses the following things:

Let’s look at how the demo application looks like. It’s a standard CRUD app that shows a list-detail pattern: http://janjongboom.com/ffos-list-detail/. You can click on items to go to the detail view, you can edit items, or add new items. The ‘+’ button is an install button (only visible in Firefox) and allows you to add the app to your phone (Android / FxOS). 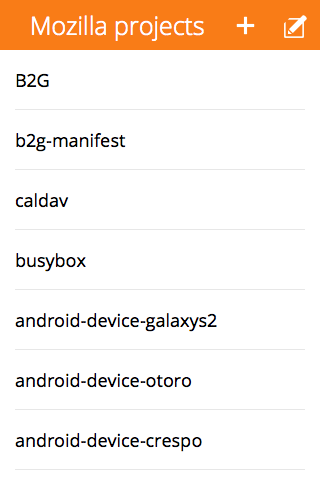 To start building, do this:

The application lives in the www/ folder, and is made up of the following subfolders:

You don’t need any build chain set up during development, you can just edit files in www, and refresh index.html at will. That’s the power of the web :-) Of course if you’re developing in the app manager, press UPDATE to refresh the app.

Now let’s add some new functionality to this application, so we can see how developing new features works in practice.

Let’s say that we want to add a credits screen that shows who built the application. First thing we need to do is add a button somewhere. In our case let’s put it on the home screen of the app. The code of the view is in www/views/list.html

The components that you see come from the Firefox OS Building Blocks, which are the same blocks that are used to build Firefox OS itself. Let’s add a new button at the bottom of the screen (below the </ul> and the </section>:

Important here is the ng-tap attribute. When we tap this item we go to /credits URL, with animation popup. There are four built in animations: forward, backward, popup and popdown; but you can create your own using simple CSS.

Now when we look at this it doesn’t look like a button yet, because we didn’t tell that we needed the button building block. Go to css/main.css and add the following line to make it look nice:

All this is always documented on the page on the Building Blocks website.

When we click on the button nothing happens though (well, we get redirected back to the list view), and that’s because we don’t listen on the /credits URL yet. To fix that we need to create a route handler (like in any MV* server side framework as well). Open the list of routes in js/app.js, and add a handler for the credits URL (before the otherwise handler):

Here we tell which controller we want to consult (with JS code), and which view (with HTML) belongs to that. Let’s create the view first. Add a new file called credits.html in the views folder.

To style this view we can add some content in css/app.css, f.e. add some padding and make the text bigger:

Last thing is to tell RequireJS that we have a new JS file that needs to be included in our builds, by editing js/main.js and adding a line above 'js/controllers/edit.js':

When we now click the button in the app, everything works as expected. The view pops in, we have data, and we can dismiss by clicking the back button. What’s also great is that when you send the URL to someone else (f.e. http://your/url/index.html#/credits) they will go to the same view by default. That’s because we do proper state management through URLs by default.

The app currently only talks static data, so we want to hook it up to a real data source. In our case the project list should come from GitHub’s page with projects by mozilla-b2g. They have an API at: https://api.github.com/users/mozilla-b2g/repos.

AngularJS has an idea of services, that abstract data away from your controller. For this app we have a database service that currently returns in-mem data. We can modify the service to talk to a web service instead. Clear out www/js/services/database.js and replace the content with:

This API is now asynchronous though, but that doesn't matter for Angular. If you data-bind to a promise, Angular will wait until the promise resolves until data binding happens.

The beauty here is now that even when there is no Internet connection, the data will still load (as long as it was loaded at least once), and the data is auto-cached. No need for the controller to worry about that.

These were two ways we quickly added some functionality to this application. First, adding a new button and a new view; and second, showing data binding and offline caching of server data. Please note that this application template can be used for much more than just list->detail applications, you've got the whole power of AngularJS at your hands!

Now when we want to share this application with the rest of the world, we can go two ways:

Jan Jongboom is a Strategic Engineer for Telenor Digital, working on IoT.