Editor’s note: if you want to help test it on a recent nightly you can toggle the devtools.webide.enabled preference in about:config. The WebIDE is available today under Tools>Web Developer>App Manager and will be renamed in tomorrow’s Nightly into WebIDE.

If you’ve been following our Developer Tools series on the Mozilla Hacks blog, you’ve seen the developer tools evolve from pure inspection to a debugging environment both for web sites and apps on desktop and mobile. Today we want to introduce you to the next step of evolution: adding in-browser editing features across devices.

Developers tell us that they are not sure how to start app development on the Web, with so many different tools and templates that they need to download from a variety of different sources. We’re solving that problem with WebIDE, built directly into Firefox. Instead of starting from zero we provide you with a functioning blueprint app with the click of a button. You then have all the tools you need to start creating your own app based on a solid foundation. WebIDE helps you create, edit, and test a new Web application right from your browser. It lets you install and test apps on Firefox OS devices and simulators and integrates the Firefox Developer Tools for seamless debugging and inspection across those devices. This is a first step towards debugging across various platforms and devices over WiFi using open remote debugging APIs. 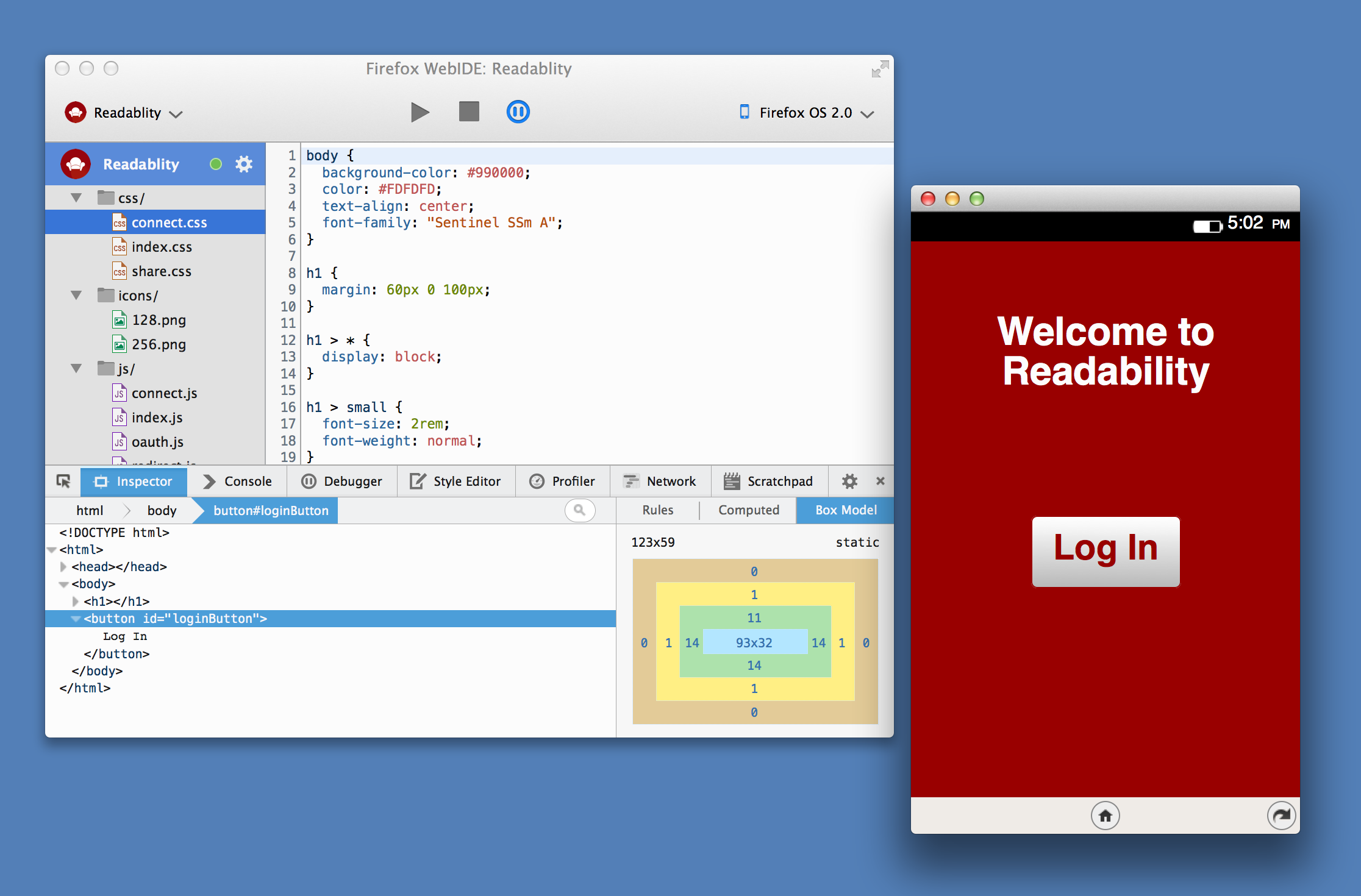 After opening WebIDE you start creating your new application with a few clicks. You choose from a set of example starter templates – and we’re working with the community to build a wide variety of additional examples. You can help creating templates by visiting https://github.com/mozilla/mortar.

Once you’ve started your project, you can edit the source files in WebIDE. Its integrated editor – based on the open source CodeMirror editor with the tern.js code analysis framework – gives you a simple but powerful editor for HTML, JavaScript, and CSS files. 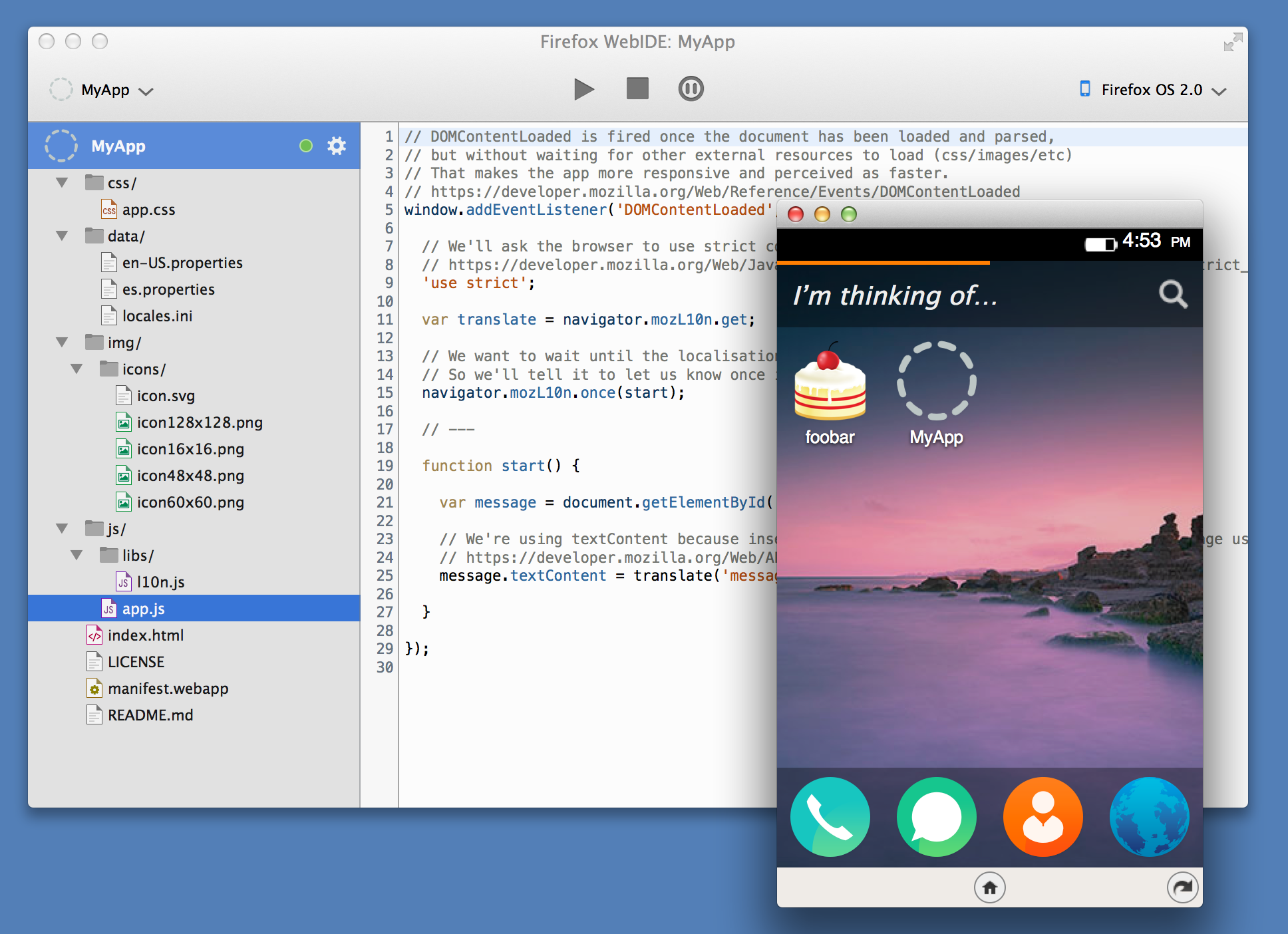 While working with your web application manifest, the application validator will help you find common problems before submitting to the marketplace.

While this is enough for your basic editing needs, you might want to use your own preferred editor instead. To do this you can use a simple API which allows external editors to access all the advanced functionality of the tool – its runtime management, pushing applications to different devices and connecting Firefox Developer Tools. You can turn off our internal editor and leave WebIDE with a simple, clean interface for managing runtimes and validating applications. We want to make it easy for users of any code editor to sling their code around to various devices. 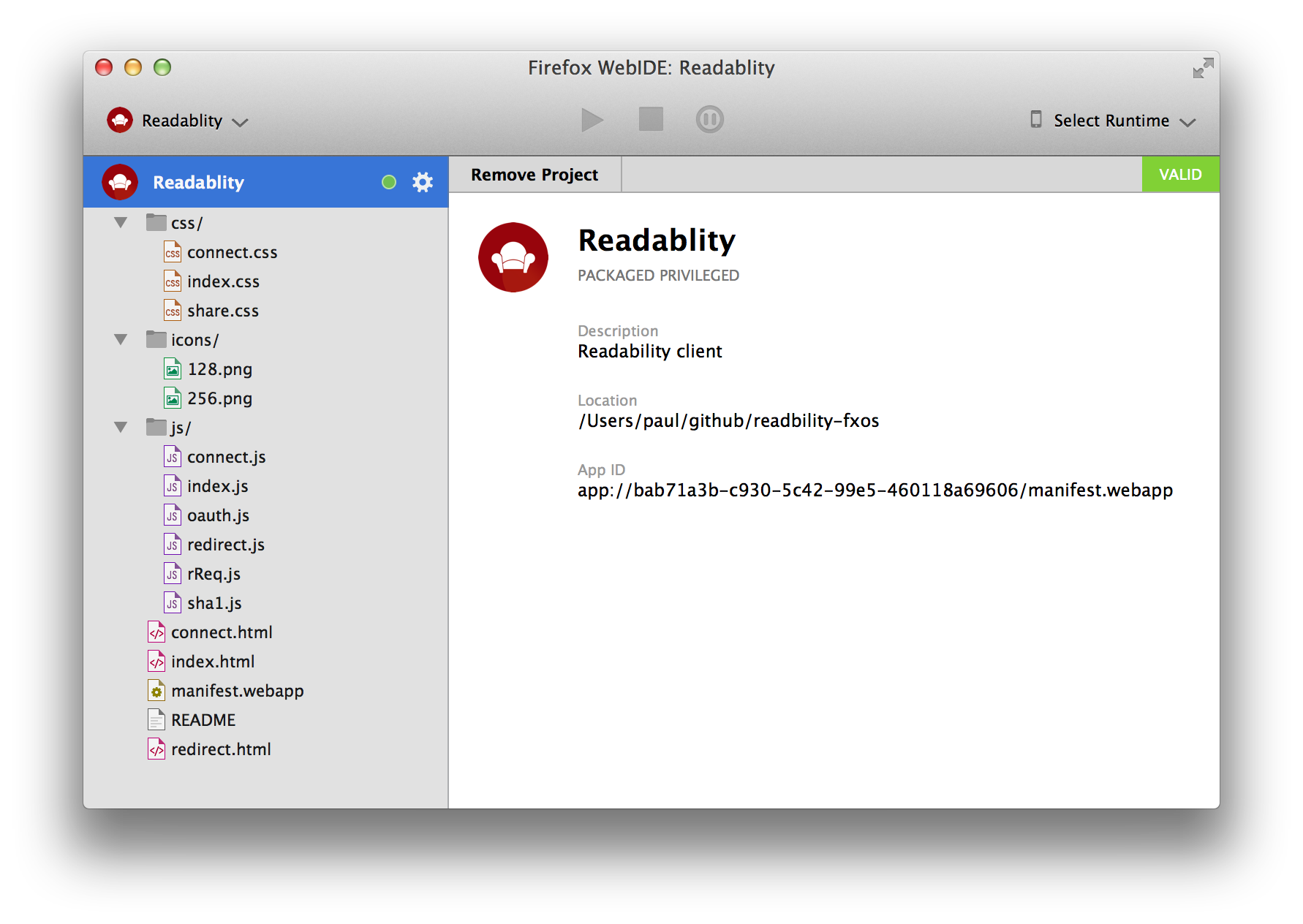 When you’re ready to test your application, choose a runtime – we’ll install Firefox OS simulators for you or help you connect to your Firefox OS device. Once connected to a runtime, you can use the tools that you’re used to in desktop Firefox to try your application. You have the same sort of rapid iteration that makes developing for the desktop web simple – just hit Ctrl/Command+R to reload the application on your device or simulator. You can get information about the device and runtime and take screenshots.

You can see the WebIDE in action in this screencast

While we put on some finishing touches, WebIDE is checked into Firefox Nightly but is hiding behind a pref – if you want to help test it on a recent nightly you can toggle the devtools.webide.enabled preference in about:config:

The Future: Developing for the Whole Web

Right now this protocol is useful for Firefox Desktop, Firefox Android, and Firefox OS. But we aren’t stopping there. We’re working on a protocol adapter that will allow clients using the Firefox Remote Debugging Protocol – including the Developer Tools and WebIDE – talk to all mobile browsers, regardless of rendering engine or runtime. Our first targets are Chrome for Android and Safari on iOS.

This web-everywhere project isn’t yet ready for testing, but if you’re excited to get involved or see how it is being implemented, it currently lives at https://github.com/campd/fxdt-adapters.

If you’re building a tool and want to start playing with the protocol you can start now, developing against Firefox Desktop, Firefox Android, and Firefox OS. For information about the Remote Debugging Protocol, take a look at the documentation.

Thanks for reading. We look forward to hearing your feedback in the comments, on our UserVoice feedback channel and on Twitter @firefoxdevtools.