Firefox 30 was just uplifted to the Aurora release channel, so let’s take a look at the most important DevTools changes in this release.

One of our most requested features has been to highlight box model regions of elements on the page. We are happy to report that this feature has landed in Firefox 30. One of the great things is that the colors of the box model highlighter match the box model diagram found in the right pane of the inspector more clearly than before.

Check out the inspector documentation to read more about the new functionality, or just see the screenshot and short video below: 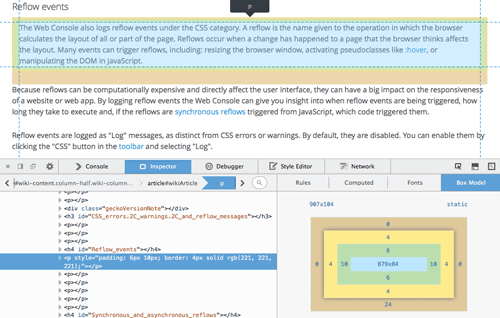 There is a new font family tooltip to the CSS rule view. Hover over a font-family value to see an inline preview of the font. (development notes)

There are some big improvements in the web console to help view and navigate output. 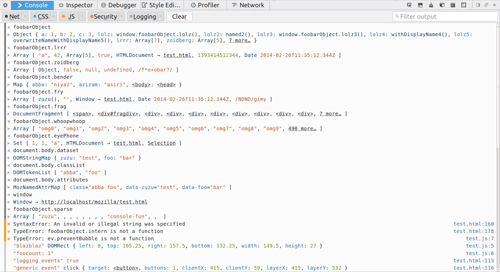 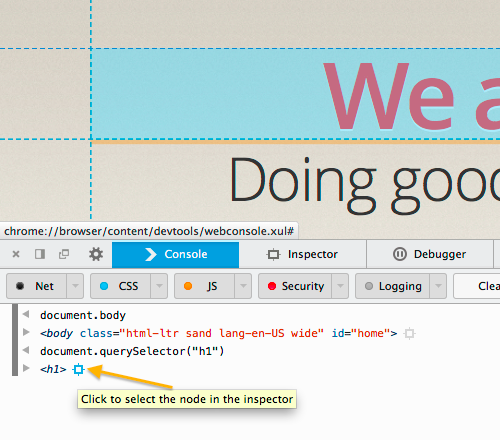 Running the cd() command in the console switches the scope between iframes. Read more in the cd command documentation. (development notes)

The Network Monitor has a new look to go along with some new features:

Network requests with a JSON-like response will show an object preview, even if the response type is plain text. (development notes)

There is new behavior for console shortcut key (cmd+alt+k or ctrl+shift+k). It now focuses the input line in web console at all times, opening the toolbox if necessary but never closing it. There are more details about this change on robcee’s blog. (development notes)

To save some space on the top toolbar, there are now options to hide command buttons, like Scratchpad. The only buttons enabled by default now are Inspect Element, Split Console, and Responsive Mode. More information about this change on the devtools mailing list. (development notes). To enable Scratchpad, Paint Flashing, or Tilt, just click on the checkbox in the options panel.

We would like to give a special thanks to all 46 people who contributed patches to DevTools this release! Here is a list of all DevTools bugs resolved for Firefox 30.

Do you have feedback, bug reports, feature requests, or questions? As always, you can comment here or get in touch with the team at @FirefoxDevTools.