WebGL brings hardware-accelerated 3D graphics to the web. Many features of WebGL 2 are available today as WebGL extensions. In this article, we describe how to use the WEBGL_draw_buffers extension to create a scene with a large number of dynamic lights using a technique called deferred shading, which is popular among top-tier games. 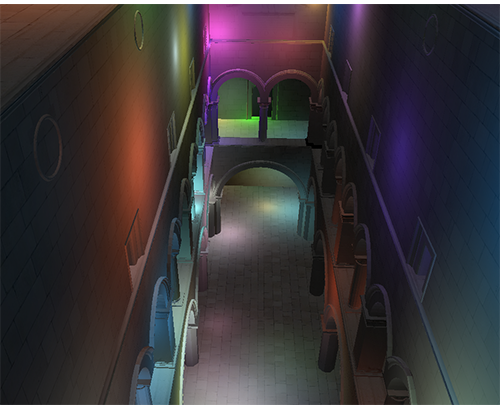 Today, most WebGL engines use forward shading, where lighting is computed in the same pass that geometry is transformed. This makes it difficult to support a large number of dynamic lights and different light types.

Forward shading can use a pass per light. Rendering a scene looks like:

This requires a different shader for each material/light-type combination, which adds up. From a performance perspective, each mesh needs to be rendered (vertex transform, rasterization, material part of the fragment shader, etc.) once per light instead of just once. In addition, fragments that ultimately fail the depth test are still shaded, but with early-z and z-cull hardware optimizations and a front-to-back sorting or a z-prepass, this not as bad as the cost for adding lights.

To optimize performance, light sources that have a limited effect are often used. Unlike real-world lights, we allow the light from a point source to travel only a limited distance. However, even if a light’s volume of effect intersects a mesh, it may only affect a small part of the mesh, but the entire mesh is still rendered.

In practice, forward shaders usually try to do as much work as they can in a single pass leading to the need for a complex system of chaining lights together in a single shader. For example:

The biggest drawback is the number of shaders required since a different shader is required for each material/light (not light type) combination. This makes shaders harder to author, increases compile times, usually requires runtime compiling, and increases the number of shaders to sort by. Although meshes are only rendered once, this also has the same performance drawbacks for fragments that fail the depth test as the multi-pass approach.

Deferred shading takes a different approach than forward shading by dividing rendering into two passes: the g-buffer pass, which transforms geometry and writes positions, normals, and material properties to textures called the g-buffer, and the light accumulation pass, which performs lighting as a series of screen-space post-processing effects.

This decouples lighting from scene complexity (number of triangles) and only requires one shader per material and per light type. Since lighting takes place in screen-space, fragments failing the z-test are not shaded, essentially bringing the depth complexity down to one. There are also downsides such as its high memory bandwidth usage and making translucency and anti-aliasing difficult.

Until recently, WebGL had a roadblock for implementing deferred shading. In WebGL, a fragment shader could only write to a single texture/renderbuffer. With deferred shading, the g-buffer is usually composed of several textures, which meant that the scene needed to be rendered multiple times during the g-buffer pass.

Now with the WEBGL_draw_buffers extension, a fragment shader can write to several textures. To use this extension in Firefox, browse to about:config and turn on webgl.enable-draft-extensions. Then, to make sure your system supports WEBGL_draw_buffers, browse to webglreport.com and verify it is in the list of extensions at the bottom of the page. 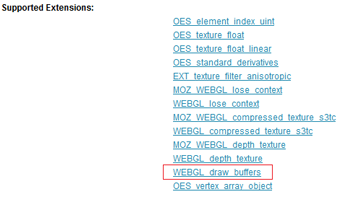 To use the extension, first initialize it:

We can now bind multiple textures, tx[] in the example below, to different framebuffer color attachments.

For debugging, we can check to see if the attachments are compatible by calling gl.checkFramebufferStatus. This function is slow and should not be called often in release code.

Next, we map the color attachments to draw buffer slots that the fragment shader will write to using gl_FragData.

The maximum size of the array passed to drawBuffersWEBGL depends on the system and can be queried by calling gl.getParameter(gl.MAX_DRAW_BUFFERS_WEBGL). In GLSL, this is also available as gl_MaxDrawBuffers.

Even though we initialized the extension in JavaScript with gl.getExtension, the GLSL code still needs to include #extension GL_EXT_draw_buffers : require to use the extension. With the extension, the output is now the gl_FragData array that maps to framebuffer color attachments, not gl_FragColor, which is traditionally the output.

In our deferred shading implementation the g-buffer is composed of four textures: eye-space position, eye-space normal, color, and depth. Position, normal, and color use the floating-point RGBA format via the OES_texture_float extension, and depth uses the unsigned-short DEPTH_COMPONENT format. 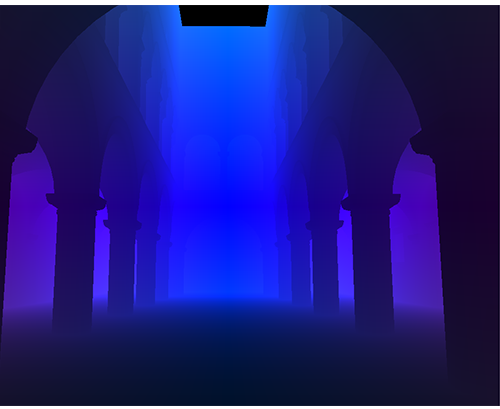 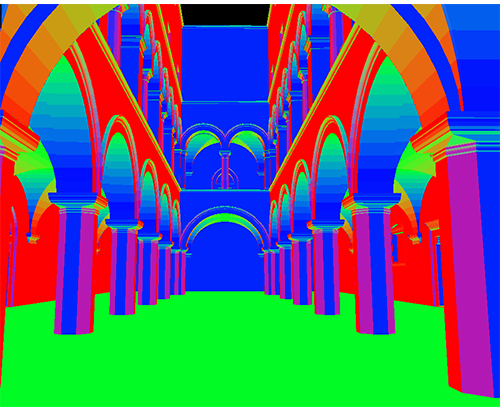 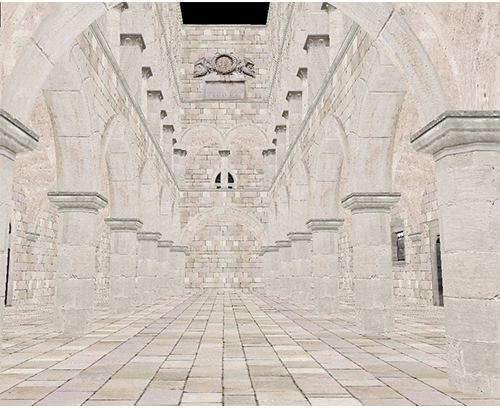 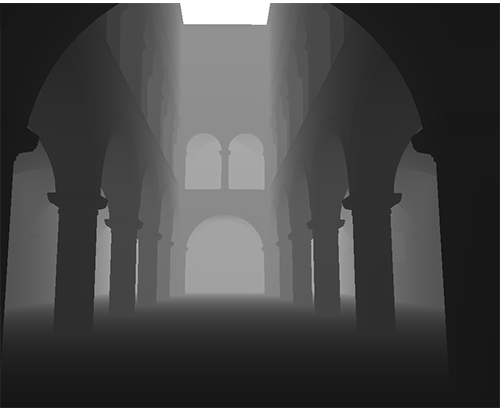 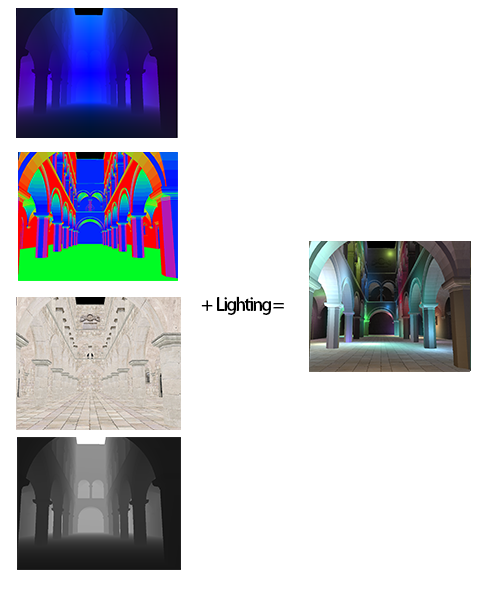 This g-buffer layout is simple for our testing. Although four textures is common for a full deferred shading engine, an optimized implementation would try to use the least amount of memory by lowering precision, reconstructing position from depth, packing values together, using different distributions, and so on. 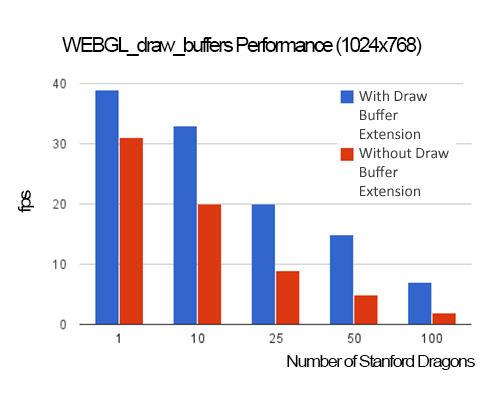 All performance numbers were measured using an NVIDIA GT 620M, which is a low-end GPU with 96 cores, in FireFox 26.0 on Window 8. In the above graph, 20 point lights were used. The light intensity decreases proportionally to the square of the distance between the current position and the light position. Each Stanford Dragon is 100,000 triangles and requires five draw calls so, for example, when 25 dragons are rendered, 125 draw calls (and related state changes) are issued, and a total of 2,500,000 triangles are transformed. 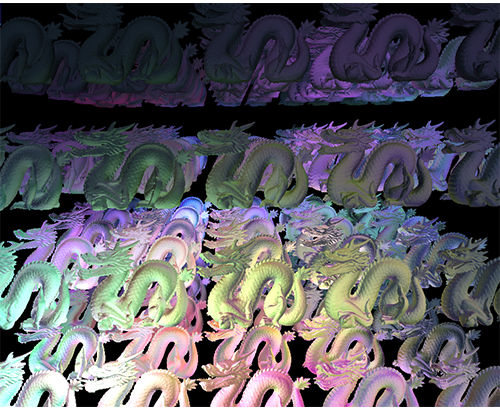 Of course, when scene complexity is very low, like the case of one dragon, the cost of the g-buffer pass is low so the savings from WEBGL_draw_buffers are minimal, especially if there are many lights in the scene, which drives up the cost of the light accumulation pass as shown in the graph below. 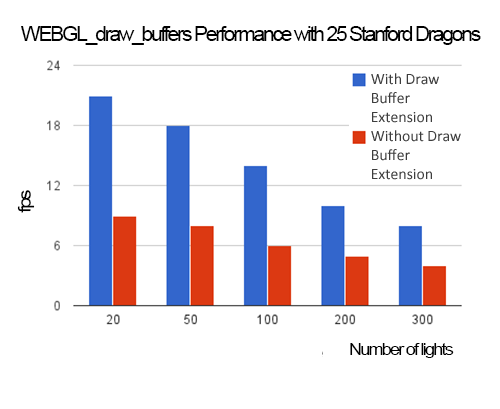 Deferred shading requires a lot of GPU memory bandwidth, which can hurt performance and increase power usage. After the g-buffer pass, a naive implementation of the light accumulation pass would render each light as a full-screen quad and read the entirety of each g-buffer. Since most light types, like point and spot lights, attenuate and have a limited volume of effect, the full-screen quad can be replaced with a world-space bounding volume or tight screen-space bounding rectangle. Our implementation renders a full-screen quad per light and uses the scissor test to limit the fragment shader to the light’s volume of effect.

Tile-based deferred shading takes this a step farther and splits the screen into tiles, for example 16×16 pixels, and then determines which lights influence each tile. Light-tile information is then passed to the shader and the g-buffer is only read once for all lights. Since this drastically reduces memory bandwidth, it improves performance. The following graph shows performance for the sponza scene (66,450 triangles and 38 draw calls) at 1024×768 with 32×32 tiles. 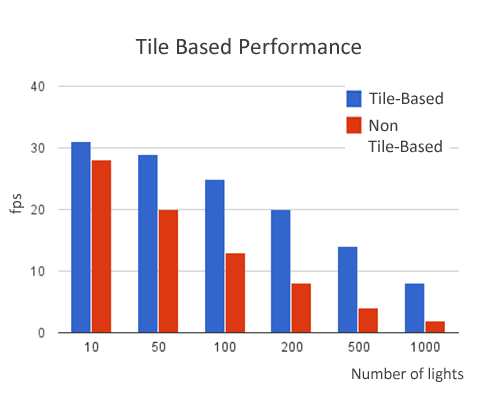 Tile size affects performance. Smaller tiles require more JavaScript overhead to create light-tile information, but less computation in the lighting shader. Larger tiles have the opposite tradeoff. Therefore, choosing a suitable tile is important for the performance. The figure below is shown the relationship between tile size and performance with 100 lights. 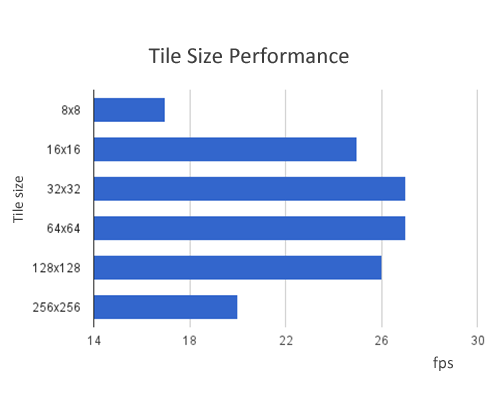 A visualization of the number of lights in each tile is shown below. Black tiles have no lights intersecting them and white tiles have the most lights. 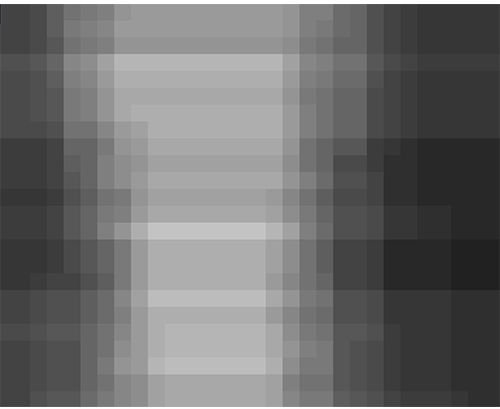 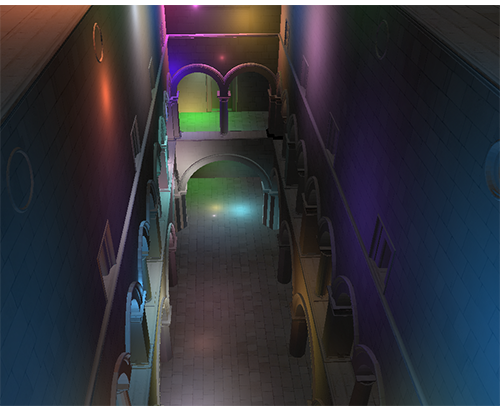 WEBGL_draw_buffers is a useful extension for improving the performance of deferred shading in WebGL. Checkout the live demo and our code on github.

We implemented this project for the course CIS 565: GPU Programming and Architecture, which is part of the computer graphics program at the University of Pennsylvania. We thank Liam Boone for his support and Eric Haines and Morgan McGuire for reviewing this article.

A graduate student at University of Pennsylvania. I am studying Computer Graphics and Game Technology. Enthusiastic in coding and gaming. Looking forward to getting into the game industry.

Patrick is the Principal Graphics Architect at Analytical Graphics, Inc. and a Lecturer at the University of Pennsylvania.