I recently created a Firefox OS app for my favourite radio station — radio paradise. It was a lot of fun making this app, so I thought it would be good to share some notes about how I built it.

It started by implementing the main functionality of the app, playing an ogg stream I got from the Internet radio station, using the HTML5 audio element

That was easy! At this point our app is completely functional. If you don’t believe me, checkout this jsfiddle. But please continue reading, since there will be a few more sweet features added. In fact, checkout the short video below to see how it will turn out.

Because this content belongs to radio paradise, before implementing the app, I contacted them to ask for their permission to make a Firefox OS app for their radio station; they responded:

Thanks. We’d be happy to have you do that. Our existing web player is html5-based. That might be a place to start. Firefox should have native support for our Ogg Vorbis streams.

I couldn’t have asked for a more encouraging response, and that was enough to set things in motion.

Features of the app

I wanted the app to be very minimal and simple — both in terms of user experience and the code backing it. Here is a list of the features I decided to include:

Instead of using the HTML tag, I decided to create the audio element and configure it in JavaScript. Then I hooked up an event listener for a button to play or stop music.

The first challenge I faced was accessing the current song information. Normally we should not need any special privilege to access third party API’s as long as they provide correct header information. However, the link radio paradise provided me for getting the current song information did not allow for cross origin access. Luckily FirefoxOS has a special power reserved for this kind of situation — systemXHR comes to the rescue.

This meant that the app would have to be privileged and thus packaged. I normally would try to keep my apps hosted, because that is very natural for a web app and has several benefits including the added bonus of being accessible to search engines. However, in cases such as this we have no other option but to package the app and give it the special privileges it needs.

That XHR call to radio paradise proides me with three important pieces of information:

Time left to the end of current song is very nice to have. It means that I can execute the XHR call and update the song information only once for every song. I first tried using the setTimeout function like this:

To my surprise, that did not work, and I got a nice error in logcat about a CSP restriction. It turns out that any attempt at dynamically executing code is banned for security reasons. All we have to do in this scenario to avoid the CSP issue is to pass a callable object, instead of a string.

Update: Mindaugas pointed out in the comments below that using innerHTML to parse unknown content in this way, introduces some security risks. Because of these security implications, we should retrieve the remote content as text instead of HTML. One way to do this is to use song_info.textContent which does not interpret the passed content as HTML. Another option, as Frederik Braun pointed out is to use a text node which can not render HTML. 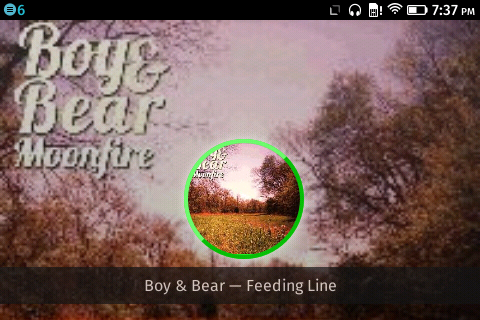 With a bit of CSS magic, things started to fall into place pretty quickly

One of the great advantages of developing mobile applications for the web is that you are completely free to design your app in any way you want. There is no enforcement of style or restriction on interaction design innovation. Knowing that, it was hard to hold myself back from trying to explore new ideas and have some fun with the app. I decided to hide the settings behind the main content and then add a feature so user can literally cut open the app in the middle to get to setting. That way they are tucked away, but still can be discovered in an intuitive way. For UI elements in the setting page to toggle options I decided to give Brick a try., with a bit of custom styling added. 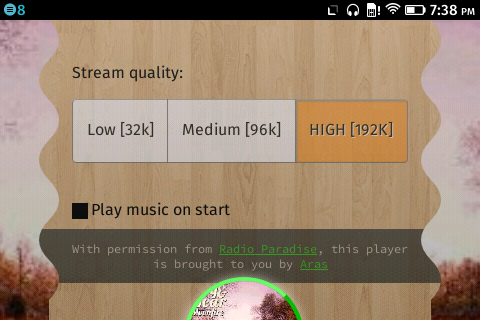 As you saw in the video above, to open and close the cover image I use pan and swipe gestures. To implement that, I took gesture detector from Gaia. It was very easy to integrated the gesture code as a module into my app and hook it up to the cover image.

For an app this small, we do not have to use modular code. However, since I have recently started to learn about AMD practices, I decided to use a module system. I asked James Burke about implications of using requirejs in an app like this. He suggested I use Alameda instead, since it is geared toward modern browsers.

I wanted to let users choose stream quality as well as whether they want the app to start playing music as soon as it opens. Both of these options need to be persisted somewhere and retrieved when the app starts. I just needed to save a couple of key/value pairs. I went to #openwebapps irc channel and asked for advice. Fabrice pointed me to a nice piece of code in Gaia (again!) that is used for asynchronous storing of key/value pairs and even whole objects. That was perfect for my use case, so I took it as well. Gaia appears to be a goldmine. Here is the module I created for settings.

Now we get to the really fun part that is splitting the cover image in half. To achieve this effect, I made two identical overlapping canvas element both of which are sized to fit the device width. One canvas clips the image and keeps the left portion of it while the other keeps the right side.

Each canvas clips and renders half of the image

Here is the code for draw function where most of the action is happening. Note that this function runs only once for each song, or when user changes the orientation of the device from portrait to landscape and vice versa.

Keeping the screen on

The last feature I needed to add was keeping the screen on when the app is running in foreground and that turned out to be very easy to implement as well. We need to request a screen wake lock

The screen wake lock is actually pretty smart. It will be automatically released when app is sent to the background, and then will given back to your app when it comes to the foreground. Currently in this app I have not provided an option to release the lock. If in future I get requests to add that option, all I have to do is release the lock that has been obtained before setting the option to false

If you have a FirefoxOS device and like great music, you can now install this app on your device. Search for "radio paradise" in the marketplace, or install it directly from this link. You can also checkout the full source code from github. Feel free to fork and modify the app as you wish, to create your own Internet Radio apps! I would love it if you report issues, ask for features or send pull requests.

I am more and more impressed by how quickly we can create very functional and unique mobile apps using web technologies. If you have not build a mobile web app for Firefox OS yet, you should definitely give it a try. The future of open web apps is very exciting, and Firefox OS provides a great platform to get a taste of that excitement.

Now it is your turn to leave a comment. What is your favourite feature of this app? What things would you have done differently if you developed this app? How could we make this app better (both code and UX)?

Aras is an interaction designer and a frontend engineer living in beautiful British Columbia, Canada. He is passionate about the open web and likes to build awesome mobile web apps. You can learn more about him on his blog.