Firefox 26 was just uplifted to the Aurora release channel which means we are back to report on new features in Firefox Developer Tools. Here’s a summary of some of the most exciting new features.

To get more flexibility in the design of an element without using additional nodes, it’s very common to use CSS pseudo elements, eg (`:before/:after{content:””}`). In the Inspector it’s now possible to see the rules applied to pseudo elements. 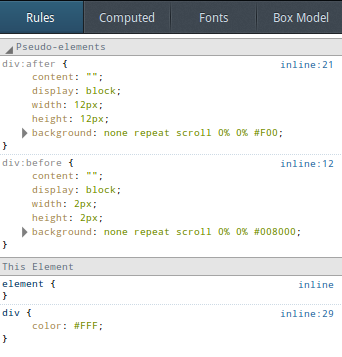 It’s now possible to pause the debugger on uncaught exceptions. It makes debugging unexpected errors easier and prevents the developer from having to step over a barrage of exceptions which were handled by Try/Catch blocks. 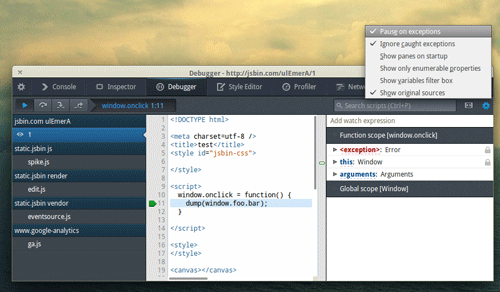 It used to be hard to select text from the web console. Fixing this bug needed a whole rewrite of the console output area. This will make copying/pasting logs much simpler and provides the ground-work for improved console output features landing soon.

It is now possible to zoom in and zoom out for the UI of all the developer tools. Do you prefer bigger fonts? Hit Ctrl +. Smaller? Ctrl -. (Cmd in Mac OS X).

The DOM view in the Inspector has also been improved. The selection is more obvious and it’s easier to expand nodes and very long attributes are now cropped.

As an added bonus, we also moved the URL preview (the bar that pops out when hovering a link with the mouse) above the toolbox. It doesn’t cover the Web Console input or any other tool anymore.

When can I use these features?

All of these features and more are available in the Firefox Aurora release channel. In another 12 weeks, these features will roll over into Firefox stable.

Have some feedback about devtools? Ping @FirefoxDevTools on Twitter, or swing by #devtools on irc.mozilla.org.