WebRTC is awesome, but it’s a bit unapproachable. Last week, my colleagues and I at &yet released a couple of tools we hope will help make it more tinkerable and pose a real risk of actually being useful.

As a demo of these tools, we very quickly built a simple product called conversat.io that lets you create free, multi-user video calls with no account and no plugins, just by going to a url in a modern browser. Anyone who visits that same URL joins the call. 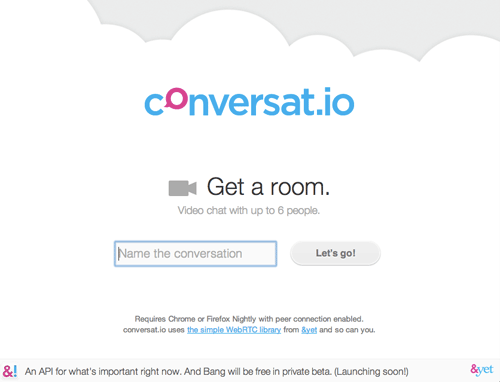 The purpose of conversat.io is two fold. First, it’s a useful communication tool. Our team uses And Bang for tasks and group chat, so being able to drop a link to a video conversation “room” into our team chat that people can join is super useful. Second, it’s a demo of the SimpleWebRTC.js library and the little signaling server that runs it, signalmaster.

(Both SimpleWebRTC and signalmaster are open sourced on Github and MIT licensed. Help us make them better!)

WebRTC currently only works in Chrome stable and FireFox Nightlies (with the media.peerconnection.enabled preference enabled in about:config).

I firmly believe that widespread adoption of new web technologies is directly corellated to how easy they are to play with. When I was a new JS developer, it was jQuery’s approachability that made me feel empowered to build cool stuff.

My falling in love with javascript all started with doing this with jQuery:

And then seeing the element move on my screen. I knew nothing. But as cheesy as it sounds, this simple thing left me feeling empowered to build more interesting things.

Socket.io did the same thing for people wanting to build apps that pushed data from the server to the client:

Rather than having to figure out how to set up long-polling, BOSH, and XMPP in order to get data pushed out to the browser, I could now just send messages to the browser. In fact, if I didn’t want to, I didn’t even have to think about serializing and de-serializing. I could now just pass simple javascript objects seamlessly back and forth between the client and server.

I’ve heard some “hardcore” devs complain that tools like this lead to too many poorly made tools and too many “wannabe” developers who don’t know what they’re doing. That’s garbage.

Approachable tools that make developers feel empowered to build cool stuff is the reason the web is as successful and vibrant as it is.

Tools like this are the gateway drug for getting us hooked on building things on these types of technologies. They introduce the concept and help us think about what could be built. Whether or not we ultimately end up building the final app with the tool whose simplicity introduced it to us is irrelevant.

The potential of WebRTC

I’m convinced WebRTC has the potential to have a huge impact on how we communicate. It already has for our team at &yet. Sure, we already used stuff like Skype, Facetime, and Google Hangouts. But the simplicity and convenience of just opening a URL in a browser and instantly being in a conversation is powerful.

Once this technology is broadly available and on mobile devices, it’s nothing short of a game changer for communications.

There are definitely quite a few hurdles that get in the way of just playing with WebRTC: complexity and browser differences in instantiating peer connections, generating and processing signaling messages, and attaching media streams to video elements.

Even at the point you have those things, you still need a way to let two users find each other and have a mechanism for each user to send the proper signaling messages directly to the other user or users that they want to connect to.

SimpleWebRTC.js is our answer to the clientside complexities. It abstracts away API differences between Firefox and Chrome.

Then in you just init a webrtc object and tell it which containers to use:

At this point, if you run the code above, you’ll see your video turn on and render in the container you gave it.

The next step is to actually specify who you want to connect to.

For simplicity and maximum “tinkerability” we do this by asking that both users who want to connect to each other join the same “room”, which basically means: call “join” with the same string.

So, for demonstration purposes we’ll just tell our webrtc to join a certain room once it’s ready (meaning it’s connected to the signaling server). We do this like so:

Once a user has done this, he/she is ready and waiting for someone to join.

If you want to test this locally, you can either open it in Firefox and Chrome or in two tabs within Chrome. (Firefox doesn’t yet let two tabs both access local media).

At this point, you should automatically be connected and be having a lively (probably very echo-y!) conversation with yourself.

If you happen to be me, it’d look like this: 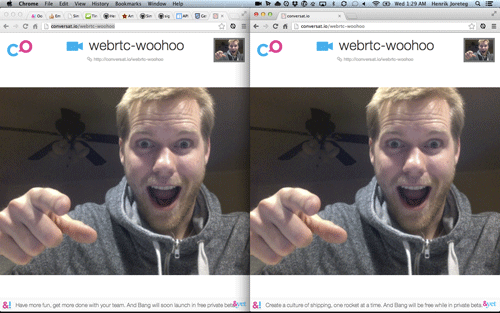 The example above will connect to a sandbox signaling server we keep running to make it easy to mess around with this stuff.

We aim to keep it available for people to use to play with SimpleWebRTC, but it’s definitely not meant for production use and we may kill it or restart it at any time.

If you want to actually build an app that depends on it, you can either run one yourself, or if you’d rather not mess with it, we can host, and keep up to date, and help scale one for you. The code for that server is on github.

You can just pass a URL to a different signaling server as part of your config by passing a “url” option when initiating your webrtc object.

So, what’s it actually doing under the hood?

The process of starting a video call in conversat.io looks something like this:

If you wish to dig into it further, send pull requests and file issues on the SimpleWebRTC project on github.

This is just a start. Help us make this stuff better!

There’s a lot more we’d like to see with this:

Hit me up on twitter (@henrikjoreteg) if you do something cool with this stuff or run into issues or just want to talk about it. I’d love to hear from you.

Henrik Joreteg is a Partner at &yet, where he’s written dozens of realtime apps two dozen ways. At &yet, he works on And Bang and provides consulting and training on JavaScript and HTML5 applications. Henrik also curates RealtimeConf and the Keeping it Realtime Newsletter. He believes WebRTC is the most interesting technology to hit the web in many years.