On January 18th, France Telecom filed an IPR disclosure against Opus citing a single patent under non-royalty free terms. This raises a key question – what impact does this have on Opus? A close evaluation indicates that it has no impact on the Opus specification in any way.

A careful reading of the FT patent reveals that:

Let’s expand on those points a bit. If you don’t want to hear about patent claims, you should stop reading this article now.

IETF IPR disclosures are a safe course of action for patent holders: they prevent unclean hands arguments or implied license grants. However, because the IETF requires specific patent numbers in these disclosures, we can analyze the claims. The patent in question is EP0743634B1, and the corresponding U.S. and other related foreign patents: “Method of adapting the noise masking level in an analysis-by-synthesis speech coder employing a short-term perceptual weighting filter”. It has a single independent claim, Claim 1. All of the other claims are “dependent claims” built on top of Claim 1. If Opus does not infringe Claim 1, it cannot infringe any other claim.

Thus Opus doesn’t perform the steps of the claim and cannot infringe the FT patent by definition. Of course this is not a legal opinion, but it doesn’t take a lawyer to figure this out. While we don’t know why FT disclosed this patent, we welcome the opportunity to evaluate such disclosures and remove any real or perceived encumbrances. This is one of the benefits of the IETF process.

The FT patent covers perceptual noise weighting, which is specific to an encoder. The claim is about the “difference between the speech signal and the synthetic signal”, when a decoder — by definition — doesn’t have access to the input speech signal.

The Opus specification only demands specific behavior from decoders, leaving the encoder largely unspecified. Even if France Telecom were to continue to assert its patent against Opus, there’s no limit to what we could change in the encoder to avoid whatever theory they have. No deployed systems break. There’s no threat to the Opus standard. We can safely say that the FT patent doesn’t encumber Opus for this reason alone.

We can always make things even safer if needed

While we don’t believe that the Opus encoder ever infringed on this patent, we quickly realized there is a simple way to make non-infringement obvious even without analyzing complex DSP filters.

This can be done with a simple change (patch file) to the code in silk/float/noise_shape_analysis_FLP.c (an equivalent change can be made to the fixed-point version).

Yup, that’s all of two lines changed. This makes the filter parameters depend only on the encoder’s bit-rate, which is clearly not, “spectral parameters obtained in the linear prediction analysis step,” as required by Claim 1. Below is the quality comparison between the original encoder and the modified encoder (using PESQ). As you can see, the difference is so small that it’s not worth worrying about. 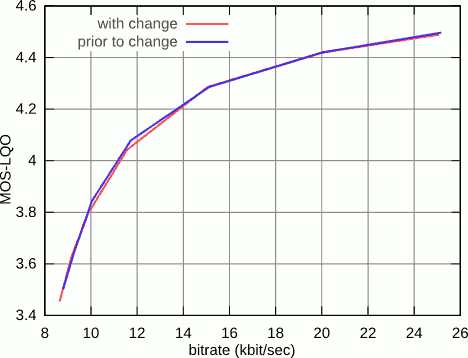 Jean-Marc Valin has a B.S., M.S., and PhD in Electrical Engineering from the University of Sherbrooke. He is the primary author of the Speex codec and one of the main authors of the Opus codec. His expertise includes speech and audio coding, speech recognition, echo cancellation, and other audio-related topics. He is currently employed by Mozilla to work on next-generation multimedia codecs.

About Timothy B. Terriberry

Timothy B. Terriberry is a long-time volunteer for the Xiph.Org foundation, working on codecs such as Theora, Vorbis, CELT, and Opus. He has been contributing to Mozilla's media support since 2008 and hacking on WebRTC since 2010.

More articles by Timothy B. Terriberry…

Greg has worked on unencumbered multimedia codecs with the Xiph.Org Foundation since 1999 and is currently working for Mozilla on next-generation royalty-free video coding standards.