Location: Porto Alegre, Rio Grande do Sul, Brazil. A long way from where I live and work in Mountain View, California. BrazilJS—two intense, action-packed days of technology showmanship, conversation, and immersion in the exuberant developer culture of Brazil. And plenty of JavaScript, which sounds something like “Jhavascreep-chi” when pronounced in Brazilian Portuguese. The days begin early and end late, with plenty of speakers and schwag, followed by craft beers and caipirinhas, great quantities of meats, pastas, and savory things, consumed at long tables in large, group dinners at various churrascarias and restaurantes.

The venue for BrazilJS is the state of the art Teatro do Bourbon Country, a 21st century take on the old red movie palaces of the past, located in the heart of a thriving shopping mall in Brazil’s southernmost big city. Brendan Eich speaks about what’s ahead in JavasScript; Mozilla Research’s Dave Herman announces his upcoming new book, Effective JavaScript; and Michal Budzynski, of onGameStart and a developer on the Firefox OS team, shares some Polish hacky goodness and awesome t-shirt style along with the unexpected pleasures of HTML5 game development.

On Saturday, September 1, about 100 web developers and translators join Mozilla and our generous hosts at ThoughtWorks Porto Alegre for the Firefox OS Apps Hack Day and Localization Sprint.

Our goal: introduce Firefox OS, Mozilla’s open source mobile operating system, and show developers how easy it is to start building mobile HTML5 apps for the Open Web. The Firefox OS phone hasn’t been released yet and won’t be available till 2013, which means there’s a huge opportunity for developers in Brazil and beyond to be part of the first wave of apps in Mozilla’s marketplace.

ThoughtWorks’ Porto Alegre offices are on the 14th floor of TechnoPUC, a technology research facility on the campus of the Pontifical Catholic University of Rio Grande do Sul (PUCRS). ThoughtWorks is a software development company with a mission and culture that resonated with us Mozillians. Here’s how they put it: “Amazing work for our clients is the front line, revolutionizing the way the industry works is a gradual effect, improving society through software is our long term goal.”

In Porto Alegre, ThoughtWorks is a magnet for talented and friendly developers and staff. They made us feel right at home early in the week, feeding us lunch and Internet signal in their open-floorplan office space. Huge thanks to Paulo Caroli, who invited us; Aurita Mugnaini, who took care of us; Glauber, Rafael, Luis, who helped us solve technical challenges; and everyone who said hello, served us coffee, and made us feel welcome.

Although it’s been about a year since the first Boot-to-Gecko repos began to appear on Github, it’s still early in the evolution of the Firefox OS. Development environments are challenging and desktop builds are tricky to install and require Linux-hacking skills that go beyond the basic web dev toolkit. But you can download Firefox Nightly, go to Tools->Web Developer-> Responsive Design, resize your browser window for the mobile phone, load the URL and get an idea of what your app will look like. Because HTML5 is here, and the Web is open.

Developers come to learn and to hack, and localizers, like the brothers Mauricio and Marcelo Araldi of Passo Fundo, come to help translate Mozilla Developer Network Apps documentation into Brazilian Portuguese. The morning kicks off with a welcome from Brendan Eich, followed by Fabio Magnoni, Brazilian evangelism rep and one-man roadshow in Portuguese. In the last few months Fabio has introduced the Firefox OS stack and Apps platform at a variety of conferences, workshops, meetups and trainings, from Campinas to Florianopolis, and from Sao Paulo to Porto Alegre.

Next up: Matthew “Tofumatt” MacPherson, whose talk, “Apps are Boring, Games are Fun” really connects with the audience. Tofumatt shows some of the recent Mortar and WebGameStub tools and templates that make it easy to code simple time-wasting HTML5 web games to impress your friends and colleagues.

The rapid fire set of talks closes with an introduction to MDN localization by Janet Swisher, and a presentation by Yaso Córdova and Reinaldo Ferraz, who talked about the mission of the W3C and the Decoders challenge, a project for developers to build public benefit apps with open data.

By the time lunch sandwiches roll in, programmers are clustered into groups, sprawled across the well-lit open floor plan, spilling into conference rooms and quiet spaces for whiteboards and beanbags. They were writing code and sucking up bandwidth.

By late afternoon, snacks begin to appear, along with an awesome Firefox cake from the mom of Jaydson Gomes. But first the demos. Scores of developers fill our makeshift auditorium, the ThoughtWorks lunchroom.

We have some topnotch demos: Brenno Leal, a student from Campinas who’s trekked down to Porto Alegre to learn a little more about Firefox OS, opens with a simple tic tac toe game. Next up, a goofy Wikipedia app that has something to do with Brazillian slang and the coxinha, a savory chicken thigh snack – one of those apps where you have to be a local to get the joke.

A pair of ThoughtWorks programmers take Tofumatt’s simple shooter game to the next level – with flying pigs that turn into bacon when hit. Look out angry birds! Next up, a Pacman clone. Gabriel Moulter, another talented coder from ThoughtWorks submits his newly minted HTML5 game app, and another called Run Little Boy Run directly to the MDN Demo Derby. Full of win! A couple of coders from Porto Alegre’s Federal University demo a handy metrics conversion app – the kind of basic app every mobile market needs.

Husband and wife team Elias and Denise come to our Hack Day and code together – after taking the night bus from Florianopolis to find out what the Firefox OS is all about. Although they both work as programmers, this is their first venture in collaborative coding! 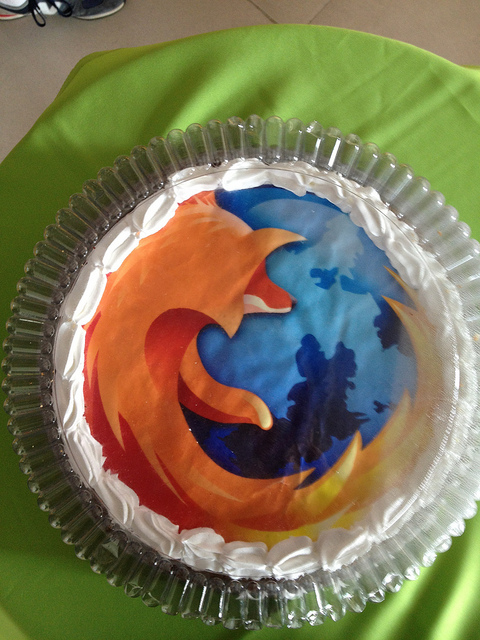 We manage to cut enough Firefox cake to feed everyone and then it’s time to head home. Kudos to Porto Alegre for the good times and the mad skills. If you took photos we’d love to see them. (I had an SD card disaster and sadly my photos were lost – I’d love to see yours.)

The Marketplace & the Opportunity

If you started coding an app, don’t stop now. If you built one of the demos, please comment below and share your names. We’d like to follow up with all of you and get all those apps ready for the Marketplace. The open web needs you!

Send us your questions or ask them on the #OpenWebApps channel on irc.mozilla.org, join the Mozilla Brazil community mailing, and as you hit certain milestones in development (code complete, ready for review) let us know. We can help with design and code review and we want to work with you to help make your mobile app succeed.