By Chris Heilmann
Posted on August 13, 2012 in Featured Article, Research, and Survey

At Mozilla, we are dedicated to keep the web open and independent of a single company or technology. This means that users should have a choice of browsers and technology to use to go online and should not be blocked out because they can’t afford a certain device or are forbidden to change their browser.

In the world of mobile web development there is currently a massive debate going on about the need for support of various browsers seeing that the most successful phone systems both use the same browser engine. This is good, and we need this debate. It is not good though when developers block out users because they concentrate on targetting a browser. Sometimes this is not by choice of the developer – they are simply using tools that do that blocking for them and the usefulness of the tool outweighs the qualms developers have about that.

We are currently talking to library and tool developers and help them support more than one browser engine to prevent this. As a start of that process we wanted to get a glimpse of what people are using right now so we make sure we have the most impact when we help. This is why we conducted an online survey asking developers about their tools for mobile development.

590 developers took the survey and we are thankful for them spending their time giving us a lot to ponder and think about.

We are very aware that this is *not* a scientifically clean research and should be taken with a grain of salt (we haven’t asked how many times people used the tools or how much of their work is building mobile apps) but it gives us a good idea of what is going on.

So without further ado, here are the numbers as charts with a quick commentary:

A lot of developers showed their love for the web in this survey, but then again it was a survey initiated by Mozilla. Most likely an Apple-lead survey would have different results. iOS and Android are the follow-up and Windows Phone and Blackberry are less of a concern for the developers who filled the survey. This, of course, could differ greatly were we do to this survey targetted to different markets. Interesting that in the case of Android the amount of “must have” is higher than “focus” – the only platform showing this.

You can compare the results dynamically here.

In the world of libraries jQuery and jQuery mobile very much took the lead with more than 200 more uses than the next follower Zepto.js. A lot of feedback was that developers don’t like libraries and use their own hand-rolled solutions on mobile instead. While it is good to see that libraries that work cross-browser are the most used ones (jQuery just announced that they happily support Firefox mobile), the high number of Sencha users is worrying and we’ll see how we can help make their cross-browser support better. Sencha was also mentioned a lot in the “why webkit only” question which shows that it is an important tool for developers.

There is no doubt that Phonegap / Cordova rules this segment of the market followed by Appcelerator. Quite a lot of feedback was also people claiming that native apps should be coded natively. Being a web evangelist, I disagree as you can not convert from native to web but the other way around, but it is interesting to see that developers felt the need to have their say here.

Not many developers seem to use visual editors, which is probably because most of them are still in a “beta” or “alpha” stage. It would be interesting to do the same survey with Flash developers who are moving towards HTML5 and see if the numbers are higher. As it stands, Adobe Edge and Sencha Animator are the clear winners, and some of the entries were interesting including one “you got to be kidding me” :).

71% of developers filling out the survey said they test for more than Webkit browsers and in the general feedback section of the survey we had a lot of information as to how people are testing and what would make things much easier for them. This makes us happy of course.

Reasons to test for webkit only

The main reason here is a lack of time to test on other platforms which is understandable – we can assume that a lot of projects from a planning perspective have 99% iOS/Android written all over them. The “lack of incentive” number is high, too, which is understandable – if you can’t show the numbers, you don’t get the time to support. The high number of “not supported on hardware” is of course another very understandable reason and we wished there would be a way to change this. 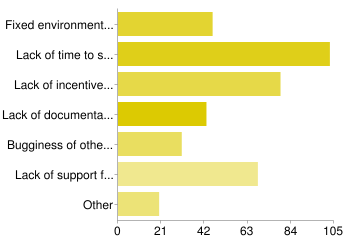 The question “What technologies/features do you use on Webkit browsers that are crucial for you and not available on others?” was answered by 135 developers and only partly answered what we needed to know. A lot of it wasn’t features of Webkit but general speed and availability reasons that are reliant on the operating system and the hardware. A lot of the answers also simply stated that these browsers come with the hardware which means end users have them and developers don’t have an overhead of installing other browsers or tools. However, quite a few developers praised the predictability of a “one browser platform web” and not having to worry about vendor prefixes and differences in html5 support.

What can mobile Firefox do better?

The question “If yes, what could Firefox mobile provide to make your life easier?” got around 230 answers and is a great resource for us to improve the browser. The message that came across loud and clear was the need for remote debugging for Firefox Android which was just announced here on the hacks blog. It is obvious that developers do not want to have a long gap between writing code and seeing the results on their phones – very understandable indeed. Quite in demand was also a native simulator for the Desktop to avoid the need of having a phone at all. Another thing that stood out was support for older and more hardware.

The “Anything else you want to get heard?” question got 73 answers with a lot of great feedback, especially praise for what is happening right now in the world of Mozilla and some very detailed concerns of developers. We now have a great time going through these answers and will see how we can accelerate a few of the demands in our next browser builds.

We’ve uploaded the anonymised answers as a spreadsheet to Google Docs, so feel free to read and dig at your own leisure: Mozilla libraries survey.

A huge Thank You

Last but not least, we want to say Thank you! to everyone who participated. We now have a lot of insightful information and can focus our outreach to frameworks, tools and libraries that will have the most impact when it comes to supporting a cross-browser web. We were also very positively surprised that the trolling and fanboi-ing was kept to a bare minimum – this showed us that the topic really is important for all developers out there.