By Havi Hoffman
Posted on May 7, 2012 in Event and hackdays

Many Thanks Yous, One Mozilla

It was a whirlwind week and a half for the crew of the Mozilla MDN Hack Day Tour in Latin America. Over the course of 10 days we visited four cities in four countries in the Conosur, the southern part of South America. We met hundreds of developers in Buenos Aires, Argentina; Montevideo, Uruguay; Sao Paulo, Brazil; and Santiago, Chile. Thanks to everyone who took the time to listen, to talk with us, and make us feel welcome.

Our message was well-received: The Web is the platform and it’s built from open technologies. On this trip, we were eager to introduce some of the new projects Mozilla is working on now to keep the Web open as more of the world goes mobile. As a non-profit committed to promoting openness, innovation and opportunity on the Web, Mozilla works best with inputs and participation from communities everywhere.

In South America, we were a small team, carrying passports from Argentina, Canada, Sweden, Venezuela and the U.S. We spoke in a mix of Spanish and English. Personally I wish more of us had spoken Spanish, but because of my own language limitations, I was extra happy to listen to Spanish-speaking presenters at each of our events.

There were dozens and dozens of individuals who helped make our tour a success, including Mozillians I work with every day and people I’d never met till we arrived in their country. The big risk in writing long thank-yous is that I will unintentionally to forget to mention someone essential, so please accept my apology in advance and don’t hesitate to use the comments.

On the Friday before MozCamp we organized a day-long Hack Day for developers from Buenos Aires. Over 150 developers attended a morning of talks and demos, followed by an afternoon of project hacking. After lunch, a lively group gathered around Add-ons developer Jorge Villalobos, while other attendees were riveted by Philikon’s demo of the Boot-2-Gecko phone.

MDN Hack Day would not have succeeded without the outreach, organizational support and hospitality of Felipe Lerena, Guillermo Movia, and Santiago Hollman of the Moz Hispano community. And I’ll add a special shout-out to the Mozcamp LATAM planning committee: Mary Colvig, Chris Hofmann, Santiago Hollmann, Gloria Meneses, Ruben Martin, Reuben Morais, Guillermo Movia, and the unflappable Katherine Naszradi. This couldn’t have happened without your support! 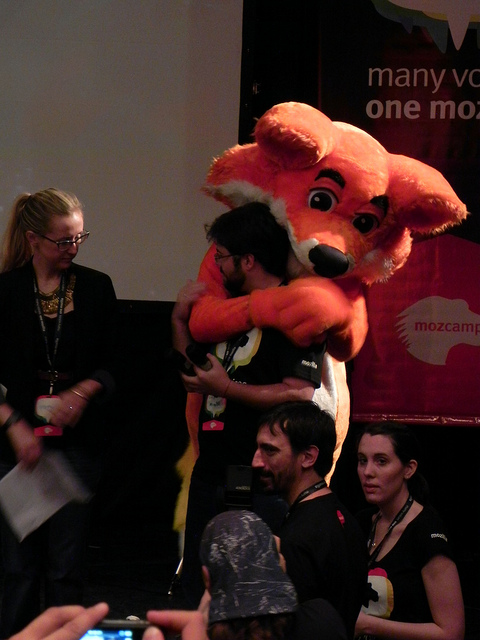 The crew left Buenos Aires on a sunny Monday afternoon, and crossed the Rio de la Plata by Buquebus ferry, arriving in Montevideo at nightfall, after a choppy 3-hour crossing.

The next morning I met up with old friend and colleague Evan Henshaw Plath, and new friends Diego Algorta, Elena Vilar and the Cubox Labs team who’d been helping us organize, promote and host MDN Hack Day in Montevideo. They work together in a classic 1920s home converted to a co-working space in a leafy residential neighborhood. I met our evening’s speakers, along with Frenchman Jean-Paul Massonnier, an awesome designer, who’d created a poster that was pure Mozilla. I drank delicious coffee and chatted with developers in the kitchen overlooking a garden where coders kicked a football around in the sunshine. 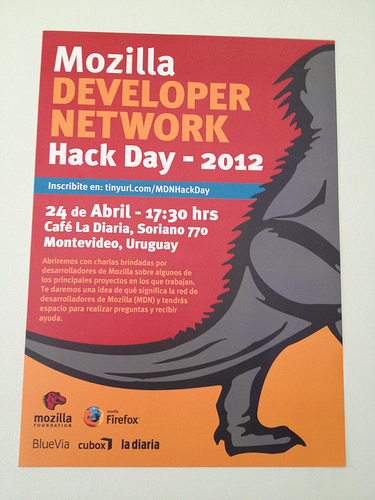 We headed over to Cafe La Diaria. La Diaria is a subscription-based independent newspaper that is now the 2nd most widely read paper in Uruguay. It is run cooperatively and distributed by employees, with a commitment to the highest journalistic standards. Cafe La Diaria is a venue and community space in the old downtown of the city. Here we met our hosts Damian and Antonieta, who cooked up delicious pizza at the break. Cubox’s Nicolas Barrera gave an entertaining and enlightening talk about responsive design, and Fernando Briano, Cuboxer and noted tech blogger served up a presentation on the web as a tool for Social Change. 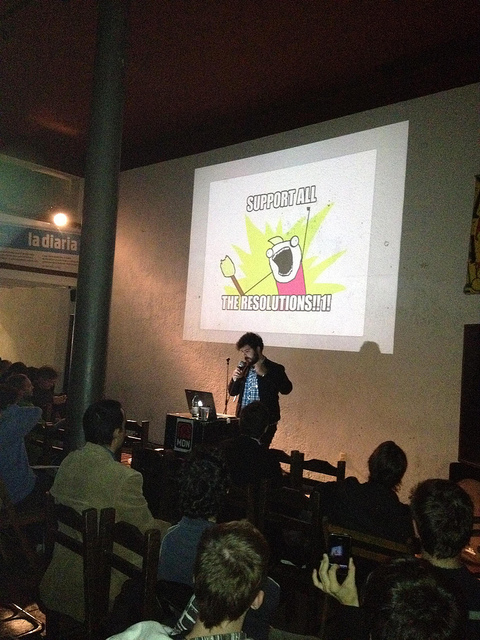 In addition, there were two lightning talks: On his last night in Montevideo before moving to Berlin, MDN demo contributor and Developer Derby winner Alvaro Mourino (aka Tuxie) stopped by to talk about our Dev Derby and encourage people to participate. Dario Clavijo, a tech blogger and IT professional in Montevideo, spoke passionately about the importance of free and open software. It was his first ever lightning talk and we were honored to hear from him!

Robert Nyman, El Sueco, made the trip to Brazil by himself, since the rest of us yanquis were lacking visas. Here’s his report:

“The next leg of the tour, helpfully organized by local company Caelum, [was] a Mozilla one-man show from me giving two talks in Sao Paulo:

In addition to that, local developer Gabriel Oliveira spoke about CSS3, and from what I could understand, he showed some really interesting things!

There were about 40+ attendees this very rainy night in Sao Paulo, and while there weren’t many people, I was really happy to see the nods of approval in the audience during my talk, when I expressed Mozilla’s values and approach to the web and moving forward. After my presentations, we stood around for a long time discussing the web, -webkit prefixes, H.264 support and more. People seemed to be understanding and pragmatic, and I believe there were some really talented people there.

Additionally, I got to spend some time being guided around by local community members Fábio Magnoni and Clauber Stipkovic, who I got to know in person at MozCamp in Buenos Aires, and had interesting discussions!”

Our final Hack Day of the LATAM tour took place in Santiago, Chile on an overcast Saturday evening. We met in a comfortable classroom at the University of Chile’s Escuela de Economía y Negocios. Jano Gonzalez, a Ruby blogger and all around nice guy made the arrangements. His friends Paulina and Rodrigo took some of the team on a tour of the city.

More than 50 attendees came out to hear from us. Pizza Hut (!) delivered pizza during the break. Hernan Colmeiro came out from Buenos Aires to introduce Add-ons and to demo Boot-to-Gecko. And Jonathan Gonzalez, no relation to Jano, introduced the Monkey Project, a fast and scalable web server for Linux.

We had a strong showing of lightning talks: including presentations delivered in English, with slides in Spanish; presentations in Spanish, with slides in English; a compelling pitch by Ricardo about why you should overcome your shyness and get up at events to give talks about the stuff you know; a hilarious parody of a framework that was probably NSFW, but I didn’t understand enough of the Chilean slang so I can’t be sure; and an introduction to Poderopedia, a database that aims to map the relationships between political and financial power in Chile. We also met some entrepreneurs from the Startup Chile accelerator, and on Monday a couple of us had a chance to visit their lively space.

Huge thanks to the rest of the team – everyone was upbeat, professional, collaborative, and more fun than a barrel of monkeys: Shane Caraveo, Hernan Colmeiro, Dan Mills, Robert Nyman, and a special shout-out to Shezmeen Prasad, event organizer extraordinaire, who invited me along. Props also to Jeff Griffiths, who put it all together behind the scenes, from somewhere in Canuckistan. Gracias!