WebAPI tech lead: 'We want Web pages to be able to access hardware on your computer, like camera, sensors and haptic feedback'

By Tristan Nitot
Posted on March 12, 2012 in Mission:Mozilla 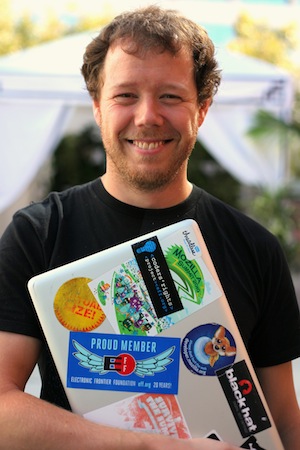 This time, Tristan Nitot interviews Jonas Sicking, WebAPI tech lead, and discusses how the Web can become a mobile platform, and what this means for Web developers around the word.

Tristan – Jonas, Mozilla has shown a very cool new project at the Mobile World Congress, Boot To Gecko, and said “the Web is the Platform”. How does that relate to your work? What do you do to improve the Web?

Jonas – I’m the tech lead of the newly started WebAPI team. We started the WebAPI team at the same time as we started Boot to Gecko because we knew that in order to make the web platform fully competitive with other mobile platforms we needed to make sure that it had the same capabilities. Web pages haven’t traditionally been able to access hardware on your computer, like camera, sensors and haptic feedback. But with B2G we needed to make that happen. The WebAPI team was started for this purpose.

Tristan – So you’re basically bringing access to new capabilities to the Web? I’m sure Web developers are going to be very excited by this!

Tristan – But what about security? I’m not sure that I want every Web app to be able to say where I’m located. Or have the ability to send text messages on my behalf without me knowing it!

Jonas – Security has always been a top priority at Mozilla, and WebAPIs are no exceptions. When we offered the geolocation feature from Firefox on the desktop, a lot of thinking was done so that we give control to the user, while keeping the best user experience possible. This is our line of thinking when it comes to newer WebAPIs. For example, we never want to ask the user a security related question that they might not fully understand and make the wrong choice.

Tristan – Many people probably wonder why Mozilla is doing this… Can you explain?

Jonas – The web is amazing in many wonderful ways. It has enabled millions of people to do new things on-line. Both as far as producing content and as far as consuming content goes. In large part because it’s built as an open platform with no restrictions on how its used. For example you can “view source” any web page that you like, you don’t need to get expensive development environments from anyone and you don’t need anyones permission to publish what you built. We want to bring these benefits to application developers too. Imagine if you can look at how someone else’s web app works and learn from it, and all you need to do to write the new killer app is to fire up a text editor, write it, and publish it on a web server. Additionally, if all that it takes is that, that means that we’ll enable all the amazing web developers out there to also become application developers.

Tristan – What does that mean for Web developers?

Jonas – It means several things. First of all, the websites that you are writing today will have new capabilities, such as access to device hardware. It also means that you can turn your website into an app which starts as fast as a native app on the user’s computer or device and that runs even if the user has no Internet connection. It also means that your app will run on desktop, tablet and mobile, with no need to write separate versions of your code for separate platforms.

Tristan – In short, with little training, Web developers can write apps that will run everywhere, from desktop to tablet to smartphones… But what’s actually the difference between a Website and a Web app?

Jonas – The idea is that you’ll just write a website like you’ve always done. Then add a little bit of meta information which describes what icon and name you want to use, what permissions you need, and which URLs need to be cached on the device. Now your website can run as an app as well.

Tristan – A totally different topic now: how did you get involved with Mozilla?

Jonas – I first got involved in the Mozilla project in 2000. At the time I was in school and working part time as a web developer. I started helping out for two reasons, first of all, as a software developer Mozilla was a very cool project to get to be part of. I got to work with a lot of smart people on a piece of software that a lot of people were using (back in those days that was Netscape). It was really cool how I could, as a student in Sweden, work together with people in silicon valley on building great software.

The other reason was Mozilla’s focus on web standards. As a developer it was very annoying how inconsistently IE5.5 was implementing web standards and I saw a chance to make things work better in Mozilla. That way I would get to use those features as a Web developer. As any web developer knows, working around limitations in web browsers is one of the more painful things about the job and so it felt great to be able to remove those limitations.

Ultimately what has made me stick around is this second aspect. Mozilla’s commitment to building a great platform for users and developers is something that has always spoken very strongly to me. It feels great knowing how much we help bring the web forward.

Tristan – So much that you’re now a Mozilla employee since 2005! I guess that you see your work now as something in line with what you started doing back in 2000?

Jonas – Exactly. The world is going mobile. More and more people are getting smartphones and very soon the number of smartphones in the world is going to vastly outnumber the number of desktop and laptop computers. We need to ensure that when this happens the web remains open and that you’re not forced to interact with it through apps running on proprietary stacks. I have a lot of faith that the web will be able to stand strong and remain open. Just how open depends on how successful we will be competing with these proprietary stacks. There’s a lot of similarities with the push we did for web standards back when Microsoft weren’t that interested in following them. The goal is to have an open standardized platform that works great for users and developers. The mobile platform should be no less open.

Tristan – Any call to action for our readers who develop Websites?

Jonas – Keep developing great web applications. Please experiment with any of the new APIs, and other web technologies, that we create. Reading hacks.mozilla.org is a great way to hear about new improvements to the web platform that are coming from Mozilla (including a category dedicated to WebAPIs). Develop mobile websites that run great on small screens. We’ll soon be releasing versions of Firefox which support installable web apps; once that happens, please experiment with them and let us know what you think!

Tristan – Thank you Jonas for your time, thank you for what you’re doing in making the Web the platform of choice for apps and mobile, and everything you’ve done in keeping the Web open since you’ve got involved with Mozilla!