By Janet Swisher
Posted on October 3, 2011 in Conferences, MDN, and Sprints

At the just-finished JSConf.eu (European JavaScript Conference), Mozilla sponsored the Hacker Lounge, and held a doc sprint during the conference.

The conference kicked off with Bella Morningstar, president of the Brendan Eich Fan Club (a.k.a. Mandy Lauderdale), serenading Brendan:

Later, at Brendan’s request, he received a hand-crafted “Mandy Fan Club” t-shirt. That t-shirt, in turn, was auctioned at the end of the conference to support the wonderful work of Coder Dojo, led by James Whelton, which teaches programming skills to kids in Ireland. Holger Blank won the auction on behalf of JSConf.eu, donating 1500 euros to Coder Dojo.

For the doc sprint, the Hacker Lounge turned out to be less than ideal for concentrated work, thanks to the digital foosball table, but the sprinters found plenty of places to sit and work in Alte Münze, which was an amazing conference venue. 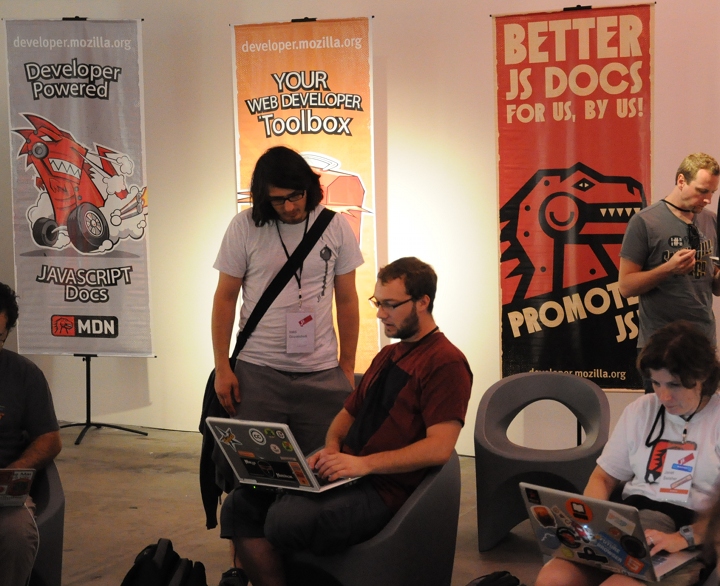 Here’s what the sprinters at JSConf.eu accomplished:

We also had remote contributions:

Big thanks to Jared Wyles for mentioning the doc sprint during his talk. I’ll hold him to his request for peer pressure to work on open source!

Thanks also to Holger Blank and the rest of the JSConf organizers for putting on an excellent conference, and accommodating Mozilla’s ticket purchase requests.

And thanks finally to Chris Williams for suggesting that we hold the sprint during the conference, and for mentioning it in his inspiring closing keynote. One of the points he made during that keynote is that releasing software as open source is like baring a little piece of your soul. This conference reminded me yet again what an honor it is for me to work together with the thousands of people who pour little bits of their souls into the Mozilla project to create open source software and documentation to keep the Web open for everyone.