By Chris Heilmann
Posted on June 19, 2011 in Audio and Firefox

It always amazes me just how fast modern browsers and their JavaScript engines are. And how creative people get when trying to make things work inside a browser instead of relying on a plugin that our end users would have to install (and more importantly constantly keep up to date). 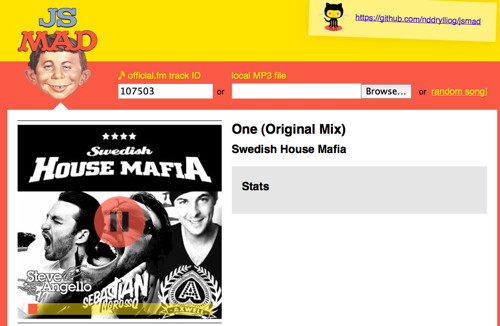 The latest thing that make me go “wow” is jsmad (source on GitHub) by Amos Wenger, Jens Nockert and Matthias Georgi. JSMad is an MP3 decoder in JavaScript!

“So what”, you say? Well, having JSMad means that now Firefox can play MP3 files without any Flash. It also means that you can listen to MP3 in the browser without the 64bit issues on Linux. With JSMad we can dive deep into the MP3 format and not only play the song but also get information about it. It allows us to build a lot of native dj-mixers, samplers and sequencers in the nearer future.

Right now JSMad works in Firefox 4+ and on Chrome 13.0+, if you enable the Web Audio API in ‘about:flags’.

I remember when MP3 came out and my computer back then was too slow to encode it without locking up in WinAmp. Back then a scene player also helped me out. Now we do the same inside a browser rather than desktop applications.