By louisremi
Posted on April 29, 2011 in Firefox and Firefox Aurora

Firefox Aurora is a preview of the next version of Firefox, released every six weeks. It provides a safe way to play with the latest Web technologies the Mozilla team is working on.

Aurora is a new preview version that fits between the Nightly builds and Betas: 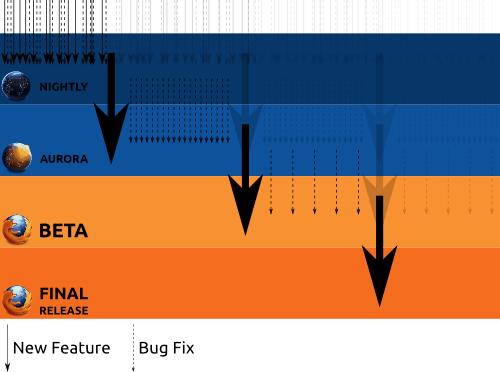 Should I use Aurora?

Amongst other things, Aurora already lets you play with CSS3 Animations and the new tabs management of Firefox. You can help us debug and test these features simply by installing Aurora from firefox.com/channel.

Once you have downloaded and installed Aurora, you can switch to other channels at will. Simply click on the Help menu and open the About window.

Update: The channel switcher will be removed from future versions of Aurora as explained by Johnathan Nightingale on the channels blog.

Start using it right away and let us know what you think about it.