By Paul Rouget
Posted on April 22, 2010 in CSS and Standards

This article about the Flexible Box Layout was written by Jérémie Patonnier, French open Web enthusiast.

CSS 3 introduces a brand new box model in addition of the traditional box model from CSS 1 and 2. The flexible box model determines the way boxes are distributed inside other boxes and the way they share the available space.

You can see the specification here.

This box model is similar to the one used by XUL (the user interface language used by Firefox). Some others languages use similar box models such as XAML or GladeXML.

In this article, all my examples are based on the following HTML code:

Distributing boxes: so what?

The box-orient property lets you specify the distribution axis. vertical and horizontal values define how boxes are displayed. Other values (inline-axis and block-axis) have the same effect, but also let you define the baseline alignment itself (basically the boxes are treated like “inline” boxes).

The property box-direction allows you to set the order in which the boxes appear. By default–when you simply specify the distribution axis–the boxes follow the HTML flow and are distributed from top to bottom if you are using a vertical axis and from left to right if you are using a horizontal axis. By setting box-direction to reverse, you can reverse the boxes’ distribution order. It acts as if you actually reversed the order of the elements in the HTML.

Be careful with this property because it changes the way some other properties work, which can produce some unexpected behavior.

The property box-ordinal-group lets you specify the order in which the boxes will be distributed. This is the ultimate customization opportunity, because you can define the order you want, regardless of the HTML flow order. Those groups are defined by a number starting at 1 (which is the default value). So the box model will first distribute those groups, then all the boxes inside each group. The distribution occurs from the lowest value (the group numbered 1) to the highest (the groups numbered 2 and above).

And what about flexibility?

If changing the natural HTML flow order is huge, the real fun begins when you start to deal with the available space.

By default, a box is not flexible. It becomes flexible only if it has the property box-flex with a value of at least 1.

If a box is not flexible, it will be as wide as possible to make its content visible without any overflow. Its size can be forced with the properties width and height (or their min-*, and max-* alternatives).

If a box is flexible, its size will be computed as follows:

So, if the boxes haven’t any size declarations, their sizes will fully depend on their parent box’s size. It will work like this: the size of box is equal to the size of its parent multiplied by the value of the its box-flex property divided by the sum of all the box-flex properties values of all boxes included in its parent.

On the other hand, if one or more boxes have an explicit size statements, the size of all those boxes is computed and all the flexible boxes share the remaining available space on the same principle as above.

It probably sounds a bit tricky, but with some examples it will become easier.

All boxes are flexible

In the next example, box 1 is twice the size of box 2 and box 2 has the same size as box 3. It looks the same as using percentages to set the boxes’ sizes. But there is a big difference. If you add a box, you don’t need to recalculate its size. With the flexible box model, each time you add a box, all the others automatically shrink to make room for the new one.

Some boxes have a fixed size

Because we can mix flexible boxes, inflexible boxes, and flexible boxes which have preset sizes, It’s possible for the sum of all the boxes’ sizes to be larger or smaller than the parent box size. So you can have too much space or not enough.

I have too much space available; what do I do?

The property box-pack manages the way the space is distributed on the horizontal axis and can have one of four possible values: start, end, justify, or center

The property box-align manages the way the space is distributed on the vertical axis and can have one of five values: start, end, center, baseline, and stretch

What happens if I don’t have enough space?

Just like with the traditional box model, the overflow property lets you to define the way it’s managed. No surprise here.

However, you must be careful here too. Indeed, the use of the properties box-orient and box-direction can mess it up. For example, you can see elements overflowed to the right instead of the left or to the top instead of the bottom. Take the time to experiment before trying to use it on a big project or you could go mad.

You can also avoid overflow by making the boxes run over multiple lines (or columns, depending on the orientation) by setting the property box-lines to multiple.

Okay, cool, but does it work in real life?

Yes it does! Both Gecko and WebKit have vendor-prefixed implementations of a box model (Note: The current state of the specification does not reflect Mozilla’s or WebKit’s implementation). This means that Firefox, Safari, Chrome, and any browsers that use one of those rendering engines are able to use the features described in this article. If you use one of those awesome browsers, here is a little demo of the flexible box model in action.

If you’re not using a browser implementing a box model, this screenshot shows you what it looks like: 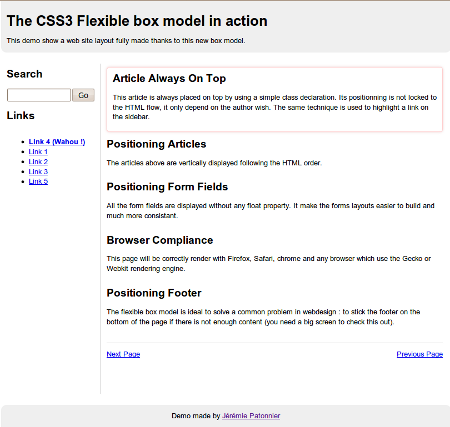 You can start to use this box model to layout your HTML documents with modern web browsers. Be careful though, it’s the really first iteration of a W3C Working Draft. There will certainly be some changes. Anyway, the implementations available in Gecko and Webkit are extremely consistent and mature, so if there are changes, they should not be that troublesome.

This box model is a very easy and simple way to solve some usual problems in web design (form layout, page footers, vertical centering, disassociation of visual flow from HTML flow, etc.). I strongly suggest you become familiar with it because it could become a standard tool for web designers in the near future (if Microsoft decides to include it in IE, it could become so very fast).

What is already available is a good start to play with. But at this point, the way the traditional box model and the flexible box model interact is not very clear (for example, it’s impossible to use position:relative with the properties left or top on a box which uses the property box-ordinal-group). This will be improved, but don’t be surprised if your work habits are somewhat undermined. Another tricky point: the way all the properties relative to this new box model interact can be sometimes really confusing. This should remind you of the day you discovered the float property. ;)