This demo is from Daniel Glazman who works actively on web standards and is a long-time mozilla contributor.

CSS Media Queries were originally a proposal submitted to the CSS Working Group by Opera Software and are now implemented in Firefox 3.5. In short, Media Queries extend the media declaration attached to a stylesheet to allow matching based on the rendering device’s intrinsic properties.

Let’s take a link element declaring a stylesheet inside an HTML document:

Now imagine you want this stylesheet to apply to the document if and only if the width of the content window is less than 300 pixels… CSS Media Queries make it simple to declare:

It’s then very easy to have one single web page ready for consumption on a wide variety of devices, ranging from mobile devices to monochrome tty displays.

When viewing the demo, please don’t forget to resize the window from large to very very small (less than 100px!) to see it in action.

View the Demo in Firefox 3.5 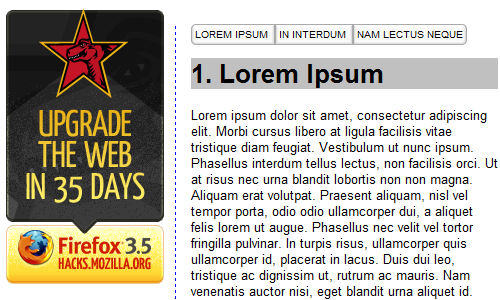