Firefox 3.5 for 35 days – dreaming about the future of the web 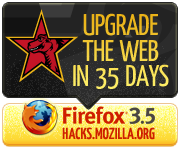 Over the next 35 days we’ll be talking about all of the new developer features in Firefox 3.5.

The upcoming release of Firefox 3.5 is a big upgrade for users.  It includes new privacy features, improvements in interactive performance and a new JavaScript engine that will improve the experience for users using script-heavy web sites.  These are all features that users will appreciate and talk about.

But what Firefox 3.5 really represents is a huge upgrade to the web itself.  We’ve included support for audio, video, threads in JavaScript, new canvas features, tons of new CSS features, downloadable fonts and geolocation.  While Firefox 3 was a signifigant upgrade for the web’s users, Firefox 3.5 does the same for developers.

Because of the sheer volume of new features for developers in Firefox 3.5 we’ll be spending the next 35 days featuring all of them, with two posts a day, every day.  Each day’s first post will describe one new feature in Firefox in depth – how to use it, why it’s there and some examples of what it can do for you.  The second post will be all fun – examples of demos that people have put together using all of the features that are in Firefox 3.5.

Like much of what we do at Mozilla this is a community-led project. We’ve reached out to members of the Mozilla and web developer community for posts and demos.  Some posts will be written by core Mozilla hackers, but many of them will be written by people who are just excited about the chance to use this technology in the wild.

My personal belief is that these posts represent Mozilla’s dreams for the future of the web.  We are not a company like every other browser vendor – our core mission is to improve and protect the web.  Firefox 3.5 represents what we think the next stage of the web will be – interactive applications, video, web sites collaborating and sharing information – all via the browser.  Our hope is that each of you will take what we post here, encourage other browser vendors to implement similar features where they haven’t already, and do your part to keep the web vibrant.